It gets no easier tonight for the Washington Nationals, who face the Phillies' Cliff Lee. Lee has been one of the best pitchers in baseball over the past several years, and 2013 is looking like no exception. The Nats face a tough task tonight.

Share All sharing options for: Washington Nationals PDB: The Phillies' Cliff Lee, and an National League East Pitcher of Yore

Well, last night was a tough one. Those seem to be becoming more and more frequent. It's deep into June, and the Nats haven't been able to reel off a winning streak that signifies to the rest of the league that the team is a present playoff contender, at least in my view. While the talent is there, the results (and Bryce Harper) currently aren't. That Cliff Lee is pitching for the Philadelphia Phillies tonight also doesn't help matters.

Lee didn't blow the doors off prospect rankings, but Baseball America had him as the 30th best player in the minor leagues in 2002. Before 2002, Lee was actually a part of the Expos system, having been drafted by Montreal in the 4th round in 2000. He's pitched for Cleveland, Philadelphia, Seattle, Texas, and now Philadelphia again.

So, Lee's been pretty good, as you're probably aware. Including 2008, his last four seasons have by FIP- been pretty incredible: 67, 72, 61, 67, 80 (lower is better, and 100 is major league average). Lee's strengths are his control -- that is, his ability to throw precise strikes and avoid walks -- and his command -- or, his ability to make pitches break the way he wants to, to particular locations inside and outside the strike zone.

It's not just control and command, though. Lee has struck out an above-average number of hitters by K%, making for a pretty complete package and a very difficult at-bat.

Lee attacks with a four seam, sinker, change, curve, and cutter. He's seeing some historic results on his sinker so far this year, which I'll explain a bit more below.

Right, the sinker. That value is the best in baseball this year when you compare it to other sinker and two seam values across the sport. Since 2007, Lee has amassed a +73.5 value with the pitch, far and away the most during that period (and the second best hard offering overall, behind Clayton Kershaw's four seam). And just to round it out, his career high -- and the single-season major-league high -- value for the pitch was +21.9 in 2011. He's nearly 3/4 of the way to that mark before the All Star break. Even the most ardent anti-value commentators would agree that the pitch is a "plus plus" offering; I think there's a decent argument that it could be the best in baseball.

Lee's sinker has the fourth most vertical movement among major-league starters this year, but one shouldn't chalk up his success to just that. Joe Blanton, he of the 4.42 FIP, gets about the same "upward" movement from his sinker. Unsurprisingly, it's likely a combination of many things that leads to Lee's success with the offering.

Lee doesn't throw terribly hard. Indeed, he's somewhere around 40th (out of 88 qualified pitchers, > 200 pitches) in sinker velocity, and similarly middle of the pack with everything else. But without elite velocity and mostly modest movement, Lee's still getting the below batted ball results:

So how does he do it? 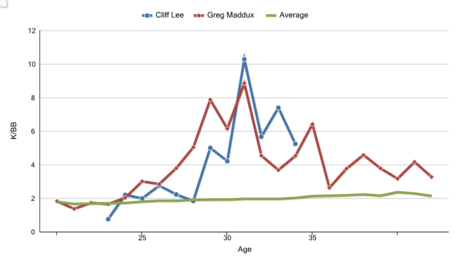 Looking at just this statistic from age 30 on, Lee and Greg Maddux aren't that far apart. Take this at face value, to be sure -- this ratio doesn't really tell us everything about what makes (and made) each pitcher successful. Maddux pitched mostly in the pre-PITCHf/x era as well, so movement figures are a little difficult to compare. And Lee is a southpaw, while Maddux is right handed.

What about their performance in particular circumstances, which we can examine? It's fairly common understanding that Maddux's M.O. was to work ahead and stay ahead, and that he was good at it. Accordingly, we can look first strike percentage to measure how Lee stacks up to Mad Dog to see if he works ahead at a similar rate.

Lee does. Maddux has a career 64% first strike percentage, while the Razorback product throws first pitch strikes 65% of the time for his career. And both compare quite favorably to the major league average, which is typically near the high fifties percentage.

But Mad Dog and Lee don't just get ahead 0-1; they bury you.

Yea, a quick note: Lee's getting to two strike counts in over half of every plate appearance against him for his career. He's also ahead in the count in nearly 40% of at-bats. Pretty unreal.

Maddux had over twenty-thousand opposing plate appearances, while Lee has faced just a little over 8,000 PAs. It's probably reasonable, therefore, to expect Lee's percentages to back up a bit as he ages. And Maddux's body of work becomes even more impressive in the context of his OPS against in each of these cases; indeed, Maddux was more "P2C" than "P2K," explaining his below average percentage of plate appearances with two strikes.

Lee is near the top of the 2013 ML leaderboard in frequency of 0-2 counts. More generally, he and Maddux both got results when they were ahead in at-bats, where hitters are often on the defensive. Their control certainly helped accomplish this.

Here is where control can rear its head. Note that Maddux and Lee rarely leave their primary hard offerings to righties in, particularly middle-in, where their velocity would be exposed the most. 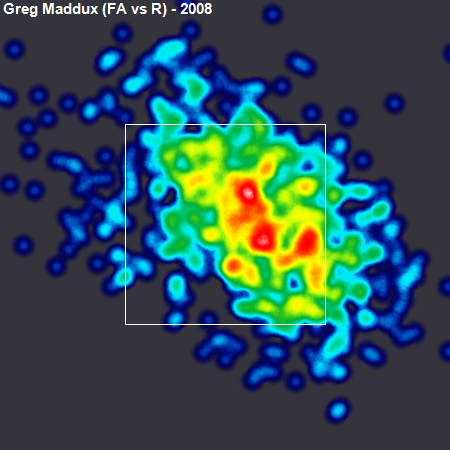 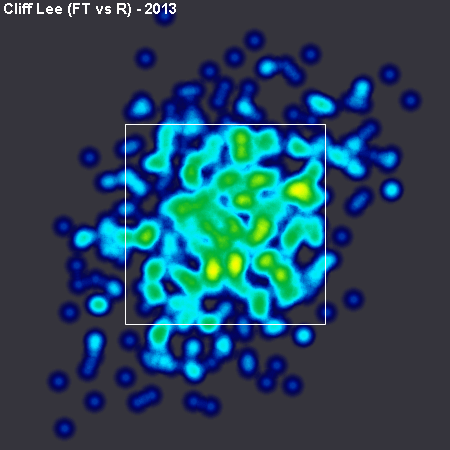 With respect to command, both hurlers have movement profiles in consistent locations. This indicates to me that each are able to command the ball effectively over lengthy periods of time. Note how Lee's plots for each pitch have distinct points and how most all plots are pooled in the same overlapping area (I omitted Maddux because of the kinks in PITCHf/x back when he threw). 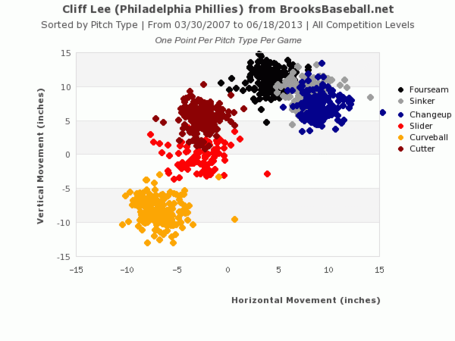 To make a long article short, Lee's getting to favorable counts often, rarely leaving batters with good pitches to hit when he gets there (see line drives on 0-2 or 1-2 counts, although he has seen a fair amount on 0-1) and is able to get reliable movement. This generally sounds like a large part of what made Maddux so successful, as the numbers above and commentators have suggested.

To again state the obvious, there are many differences between Cliff Lee and Greg Maddux (lefty versus righty, length of sustained performance, current Hall of Fame odds), that are both salient and make the two not a cinch to compare extensively. But each twirler did amazing things without elite velocity on the strength of impeccable control and command.

It is also interesting (to me, anyway) to evaluate my view of Lee against a close contemporary with similar traits. They both throw strikes, but not just any strikes: These are consistently some of the best pitches that fans have seen against the greatest hitters in the world, and they aren't blindly fast, or cartooish in their trajectory.

Tonight, then, one could make a fair case that the Nats are facing someone as talented as the thirty-four-year-old Greg Maddux, circa 2000. The Expos scored two earned runs over 14 innings against Maddux that year. And that means there's a chance.

Big thanks to Baseball Prospectus, Baseball Reference, Brooks Baseball, and Fangraphs for statistics.