Because I profiled Jhoulys Chacin last week (edit: apparently now Tyler Chatwood is starting), I opted to take a birds-eye look at the Washington Nationals' pitching performance so far this year, as well as how the team is doing in comparison to last year. Although the pitching performance hasn't been as good as 2012, the Nats are average or better in several core metrics.

Share All sharing options for: Washington Nationals PDB: The Nationals' Starting Pitching Performance Compared To Other MLB Teams, and 2012

The probable starters website for the Nats on Wednesday stated that Jhoulys Chacin would pitch against Washington tonight, but that changed sometime yesterday, and I didn't notice before doing research for this article. So, apologies that there will be no Tyler Chatwood PDB. He would have been fun: The former Angel is showing a huge ground ball rate (58%), but high BABIP (.351!) against a great 2.53 FIP and 3.37 xFIP in 38 2/3 innings. He's almost league average in both strikeout and walk percentage.

Anyway, I thought it would be helpful to compare on a major league-wide level how the Nats' starters are pitching this year. Looking at their performance relative to other teams, as well as how the team did last year through this time, can help to see where their strengths and weaknesses lie.

I'm not wedded to the idea that strikeouts, walks, and home runs are all that a pitcher can control, but I think they help isolate how well hurlers perform. So, I've used those numbers, and plotted data points for each against win percentage.

Of course, the below metrics don't completely explain a team's win percentage; it really doesn't explain a ton of that, in fact (offense, defense, sometimes umps, and the baseball gods all contribute). But I thought it could be useful to see the information paired with the performance of other big league clubs.

Free baserunners are not good. It's no revelation, therefore, that limiting walks can help make an otherwise average pitcher or staff better. As you can see, though, there's little in the way of a negative linear relationship between walk percentage and a team's win percentage this year (names are above the corresponding data point). 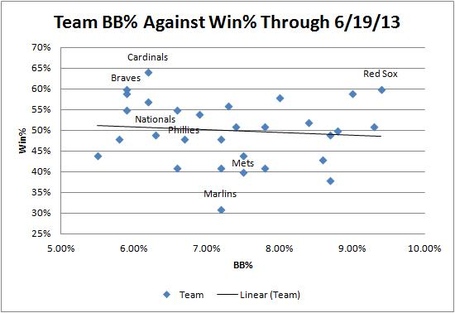 Among teams with a walk percentage as low as the Nationals, the majority are winning at least 55% of their games this year. The Nats' starters, with their 6.3% rate, rank 8th in major league baseball by this measurement. From this view, it seems reasonable to say that the staff is holding up its end of the bargain.

The starters through June 19, 2012 had a 7.4% walk rate. Ross Detwiler, Jordan Zimmermann, and even Dan Haren have seen lower walk rates this year than last, accounting for the improvement. On the flip side, Gio Gonzalez and Stephen Strasburg are mostly the same.

Unlike the walk, the strikeout is a positive for pitchers. How are the Nats doing relative to the league, and what is the winning percentage of teams plotted against this stat? 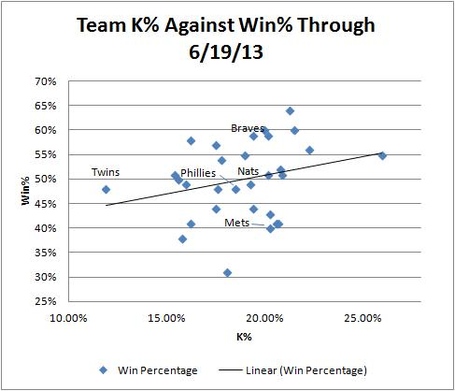 We see a slightly stronger relationship between a team's strikeout percentage and their winning percentage here. The Nats are just about average in K% -- 19.3% -- and rank 16th out of 30 major league teams in this metric. As of June 19, 2012, Washington starters had a strikeout percentage of 22.6%.

Knowing that Zimmermann has thrown the most innings on the team, and that Strasburg has missed a few starts, the present figures are around what I would expect. This also supports the general notion that the team's rotation has two so-called "pitch to strikeout" ("P2K") starters -- Gonzalez and Strasburg (although his K% is above average, it is down this year) -- and three "pitch to contact" ("P2C") starters, at least if one goes by their actual strikeout totals.

But batter-by-batter approach can certainly vary. And if you believe that a pitcher has enough control over batted balls to make a difference, then you can conclude that the Nats' strikeout numbers are perfectly fine. If not, then it looks like the starters could show improvement, when reckoning their overall talent.

Thinking about the future: Haren and Detwiler aren't big strikeout guys, and two other starters seem to have committed to a "P2C" approach. So, this probably won't shift all that much over the remainder of the year. Consequently, the defense will continue to be required to convert more batted balls into outs this year.

The worst result for a pitcher that is independent of defense (and often in any case) is a home run. Below, you'll see HR/9 rates against win percentage for each team. 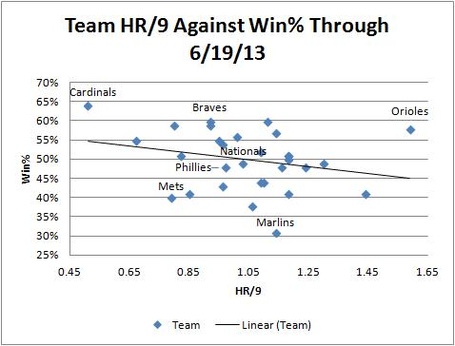 Check out the Nats' starters' numbers from last year, and you'll see they sported an awesome .71 HR/9. As bad as Chien-Ming Wang was (1.53 HR/9 through 1st half), Haren has been worse (2.06 HR/9). He has shown at times that he can command the cutter and sinker (meaning, he'll sometimes get late action to the left on the former, and arm-side and downward break on the latter), and as you may gather from the BB% section, he doesn't walk many. But too many "hard" offerings are ending up over the plate to make me optimistic about a big turnaround.

In the end, I think it's reasonable to say that the D.C. starters are performing quite well with respect to core performance, particularly considering 1). the apparently-prevailing "P2C" approach and resulting reduction in strikeouts and 2). that Haren's repeatedly been serving up home runs like there's no tomorrow.

Fielding Independent Pitching brings the above three metrics together and scales to ERA to help isolate a pitcher's contributions from his defense and batted ball results (excepting home runs). I'm comparing this to a different measurement -- runs allowed -- than a team's win percentage to better understand the Nats' hurlers performance relative to the number of runners crossing the plate while they pitched. 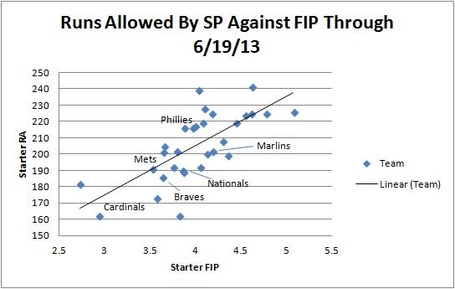 The Nats rank 11th in the bigs in FIP, with a 3.86 mark, and 7th in runs allowed (190). Baseball Reference notes that these two statistics show a pretty close relationship ("[f]or most situations, FIP and Runs Allowed Average (RA, essentially what we use) will be very close and are strongly correlated"), which the chart above demonstrates.

If you go by FIP, and if my math is right (huge qualifer), the starters should have actually allowed somewhere around 183 runs. Not a huge difference between that and 190, but it's worth mentioning that the team has lost 8 of their 21 one-run games. Ultimately, it's probably close enough to not bicker over. And again, the math thing.

Here's where we really see some separation between the 2012 and 2013 starters: Only 146 runs had been allowed by this point last year. To be fair, though, starters had pitched around 35 fewer innings and in four fewer games through June 19 last year. Note also that the team's FIP was .31 lower, at 3.55.

These comparisons highlight how for the Nats the "P2C" approach (if you believe it is on balance worse than "P2K" and that Zimmermann in particular could increase his strikeouts) and increased home run rate can lead to less desirable starting pitching metrics. But we can also see how these performances aren't close to being exclusively responsible for the team's overall performance.

This news is no surprise to the Federal Baseball community. Views differ on whether the offense will turn it around, but I believe fans can be confident that if that happens, and considering accomplishments to this point, the Nats' pitching will continue to perform well enough to earn a playoff spot.