The Arizona Diamondbacks' Trevor Cahill follows in a line of other ground-ball heavy pitchers that have opposed the Washington Nationals this year. While his strikeout and walk rate are below average, the Nats' ground ball tendencies could work against them tonight.

You've probably seen the biggest news of the day around NatsTown, but Bryce Harper is slated to begin a rehab assignment tonight. Provided he's healthy, there's little better news regarding one player that the team can get during these up-and-down times. And the Taylor Jordan call-up watch is on, too.

There's also a game on the field in Washington. Tonight, the Nationals kick off a three-game home set with the National League West-leading Arizona Diamondbacks. Trevor Cahill takes the mound for the Snakes.

Cahill was drafted in the second round of the 2006 draft by the Oakland A's. His first extended professional action came as a 19-year-old in the Low-A Midwest League, where over 100 innings the righty approached a 3:1 K/BB ratio and sported a 2.74 FIP.

Cahill generates different opinions from scouts and observers. Although his velocity has picked up some (hitting 93 MPH at times this year), he still works mostly in the 89-92 range, not plus velocity, granted his fastball has strong sinking action. His curveball and changeup are both fine offerings, and his intelligence and confidence are big assets.

However, the lack of a big-time massive plus velocity heater causes some to project him as more of a Jeff Suppan control, inning-eating type than a true future ace. Others point out that not every great pitcher has great velocity, and Cahill's intelligence and guile are huge assets. The sabermetric case points to the combination of strikeouts and ground balls as a big positive.

Sickels concluded that he was in the pro-Cahill camp. While he wrote the above thoughts before the righty was promoted to Double-A, Sickels was probably of the same mind after the Californian's performance in Midland.

Ranked the eleventh best prospect in the game by Baseball America after 2008, Cahill could just legally crack a cold one when he debuted in 2009 with Oakland. His strikeout rate, north of 20% in the minors, took a hit on his debut (11.6%). But his performance ticked upward after that. In fact, depending on your WAR metric of choice, it may have continued to do so.

Cahill had a career-low .236 BABIP in 2010, which supported his 2.97 ERA and four-win season. His expected batting average on balls in play that season, though, was .285.

Cahill's game is ground balls, and he is getting as many as ever this season (58%). On the downside, his strikeouts remain down (16.4%), and his walk rate is below the major league average (8.9%). Yet, his FIP/xFIP remain close to 2012 levels, so he seems to have a decent shot at equaling last year's fWAR.

Cahill's main offering is a high-80s sinker, which generates over 60% grounders on balls in play. Fangraphs sees his cutter as a slider; I've substituted that value here.

The 25-year-old's pitches, velo, and usage are actually quite similar to Cliff Lee, who I profiled last week. This is an interesting example of how similar pitches and velocity do not necessarily yield similar results; Lee pounds the strike zone consistently in places where batters can't do damage, while Cahill exhibits inferior control.

Here is Cahill's 2013 situational usage chart. You'll see he favors the sinker early in the count or when the batter is ahead, and then goes more to cutters, curves, and change-ups late against both lefties and righties: 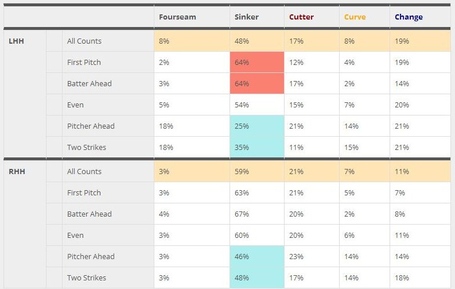 I'll look at that cutter usage in a little greater depth shortly.

As mentioned earlier, Cahill burns a lot of worms. So many, in fact, that he's ranked first the majors in ground ball rate.

You'll note his BABIP is more around what we expected from him in 2010. But this year, xBABIP thinks he should be seeing a .314 rate. On the other hand, high ground ball pitchers tend to have lower BABIPs on grounders than the average major league hurler. Cahill is no exception (he's also seeing a much lower BABIP on fly balls, but a higher-than-average number on line drives).

Chris Cwik of Fangraphs wrote on April 17 that Cahill had markedly increased his cutter usage in early 2013. While cautioning that no firm conclusions should be made from the small sample and that continued observation would be necessary to fully appreciate Cahill's development, Cwik concluded that

The introduction of a cutter helped Cahill grow as a pitcher last season. Realizing that, he’s started relying on the cutter a lot more this year. Based on how well the pitch helped him last season, this seems like the right strategy. At the very least, the improvement Cahill showed last season should be retainable this year.

Here is how Cahill's cutter was performing on a per-start basis by whiffs/swing in the four starts before Cwik wrote his article: 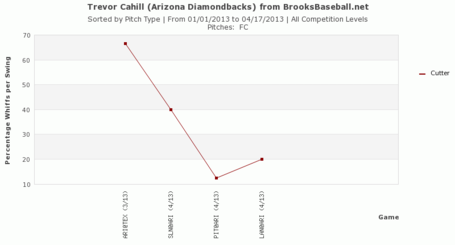 Here's the same graph, but through today. You'll see the whiff rate varies a fair amount by each game: 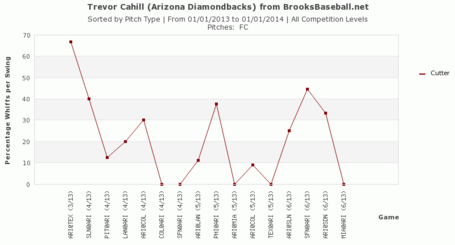 Overall, Cahill has continued to use his cutter more often than he did 2012, and the oscillating whiff rates above add up to a 20.7% swing-and-miss rate. This ranks him 21st among 50 qualified pitchers in the stat.

But, while his cutter wOBA against through April 17 was .232, it currently sits at .353 -- not all that great. So, it has been a mixed bag; as Cwik would likely agree, there's no reason increased usage can't lead to better results long term, once Cahill becomes more comfortable with the pitch.

Now, here is how these pitchers did against these teams. At the bottom, I've included both the overall average and the mean for when the hurlers were getting average or better ground ball results.

When the top five are getting their normal (or better) ground ball rates, the performance of teams that ground out the most is not that great. Don't take this too seriously, of course: The sample size is in several ways small, and some of the points I've selected are fairly arbitrary, among other things.

If batters are plowing the infield through the early innings against Cahill, the Nats may be in a difficult position. What is more, D.C. has seen results that are 5% worse than the major league average when hitting grounders, further demonstrating part of the challenge this evening.

Since it doesn't appear that Washington will strike out a lot (if that happens, they are probably in more trouble), batted ball results and Cahill's control figure to be the likely story lines. Righties happen to hit Cahill marginally better, so don't be surprised if Davey goes with a majority-righty outfield.

Big thanks to Baseball Prospectus, Baseball Reference, Brooks Baseball, and Fangraphs for data, and Crashburn Alley for the wOBA calculator.