The Washington Nationals return home to face the New York Mets and Jeremy Hefner. After a disappointing series in Atlanta, the good guys have an opportunity to get right back on the horse and take the first of three from a division rival.

The Nationals miss Matt Harvey this go-through, which is a good thing. Another good thing? Jeremy Hefner, Dillon Gee, and Shaun Marcum aren't lighting the world on fire, and the Nationals appear to have a really good opportunity to improve their season over the next three games. Here's the low down on Hefner.

Perhaps one of the most interesting things about Hefner, 27, has been the professional path he took before arriving in Flushing last year. The Mets drafted him in both 2004 and 2005, in the 46th and 48th rounds, respectively, but he did not sign with the team either year. The San Diego Padres selected the righty out of Oral Roberts University in 2007, by which time Hefner had boosted his stock enough to merit a 5th round selection. In November 2011, the Pittsburgh Pirates liked him enough to pop him on a waiver claim, but evidently it was just a fling: The next month, the Mets once again nabbed Hefner, this time (like the Bucs) off waivers.

Hefner did not arrive in the Majors last year with an impeccable pedigree -- he was ranked the 27th best player in the Padres system in 2008, before reaching a high of 15 in 2010 -- and his results since arriving in the Show haven't been overwhelming. While he limited walks a fair amount in 2012 (4.4%), that figure has nearly doubled this year (8.4%), leaving the below-average strikeout hurler without many outs, pun (lamely) intended.

According to Brooks (new layout!), Hefner throws a bunch of pitches, six in all: a four seam, sinker, change, slider, curve, cutter. Fangraphs agrees for the most part; where it sees two-seamers, Brooks appears breaks down between sinker, slider, and cutter. Anyway, the details:

I hesitated to lump the sinker and cutter together because of velo and the fact that the cutter's actually been a pretty good pitch: In 31 AB, he's given up 3 singles (.091 BA). As the table also shows, his breaking pitches are getting good results. More precisely, in 46 at bats, he's only given up 6 singles and 4 walks, good for just a .217 OBP against.

Here's the breakdown by handedness and count: 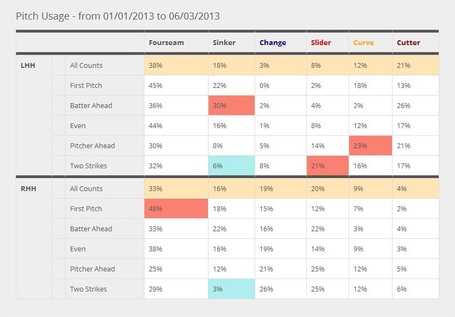 Hefner doesn't pitch backwards like Bronson Arroyo, making for about as predictable an experience as you can get with someone who throws six pitches. His breaking ball location is where you'd expect, often down and away from righties, and the slider against lefties is often down.

After looking at this information, I wondered why Hefner wasn't going to his breaking pitches more often, since they seemed to be getting good results. Like appears to be the case for many pitchers, he can't control either particularly well: he's 104th out of 112 for called strike/ball ratio with the curve, and a better 37th out of 95 in the same category with the slider. Neither pitch goes for a called strike more than once for every two balls thrown.

Hefner is doing a pretty good job at limiting hard contact so far this year, and it's translating into a lower BABIP that's helping to restrict base runners and, consequently, runs scored against him. On the down side, his HR/FB% is 14.5%, which presently is 3.5% higher than league average.

Time to figure out where batters are able to get an edge.

A majority of the home runs off Hefner have been hit to close to center and to right field. Lefties in particular have given him a tough time, accounting for 8 of the 10 total round-trippers. In fact, lefties are abusing the 27-year-old generally, hitting him 72% better than major league average. And the damage is happening everywhere; when your Baseball Prospectus zone profile against lefties looks like a stop sign, it's not good.

Is there something outside of pitch usage that Hefner is doing differently against lefties? Well, he's locating his offerings in generally the same place this year as he was last (this holds by pitch, too), so that's probably out as an explanation insofar as he's leaving pitches "out over the plate," but where other pitchers don't get burned. His velocity is similar as well, and these two could be conspiring to hurt him.

Additionally, his release point is slightly different between lefties and righties, but I'm not going to chalk up his poor performance against the former solely on these grounds when the difference is a tenth of an inch. 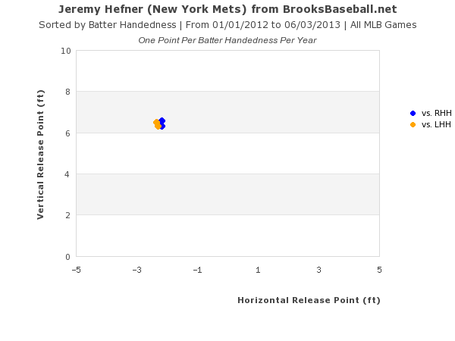 Velocity, location, usage, and release point: it's all mostly the same. Add vertical movement to that list, too. There was also his horizontal movement: 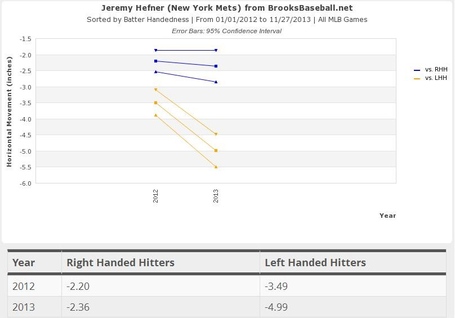 Why he generally gets more arm-side movement on his pitches against lefties is something I can't fully explain. You might pair this information with the release point discrepancy -- more sidearm -- and conclude that a more horizontal release leads to more horizontal movement (that's that Magnus Effect thing). The four seam, sinker, and change up all move to Hefner's arm side more against lefties than they do righties.

What is more interesting, Hefner himself recently stated that his location against LHH needed to be further inside, in an attempt to jam them rather than allow them to extend the bat barrel over the plate. Amazing Avenue recently took Hefner to task, and found that over his last few starts (some of his better ones), he was indeed getting the ball in more.

Even though Hefner's location has been the same, lefties also did well against him in 2012. So, given the above, it seems reasonable to conclude that his location against LHH is part of what ails him. And with that, perhaps his extra arm-side run is causing additional difficulty when Hefner attempts to come inside, as his offerings leak back out across the plate. Velo, location, movement, release point: Sometimes, it takes a village to get knocked around.

Because Hefner exhibits a pretty pronounced platoon split, I would imagine Davey will take the opportunity to run as many lefties in there as reasonable. As a team, though, the Nationals haven't hit righties all that well.

All the same, Hefner isn't a guy who should shut D.C. out, and opportunities should be there. He is predictable with his usage and location of breaking pitches, meaning that pitch identification will be important to create run-scoring opportunities. If he's making a conscious effort to go in to lefties more recently, the Nats should be aware of that and plan accordingly.

Should the Nats do as others have done, they appear primed to kick off a very manageable section of their schedule, and in turn, begin to make up ground in the standings. Now is a good time bank some wins.