The Washington Nationals will have their draft board set and the name that remains atop the list tonight will become their first selection when the 68th overall pick comes around. Last year the Nats took Lucas Giolito 16th overall. Who will Nats' GM Mike Rizzo, Asst. GM Roy Clark and scouting director Kris Kline find?

[ed note - "When the first pick of your draft is 68th overall, it makes draft day a little less exciting, but it will be interesting to see what Washington Nationals' GM Mike Rizzo and his scouts find. We'll keep this story/thread up all day today and update with any draft info there is until the Nationals make their first pick tonight."]

Talking about the 2011 Draft, which saw the Washington Nationals make three 1st Round picks (Anthony Rendon, Alex Meyer and Brian Goodwin) all of whom signed, and take Matt Purke in the 3rd Round, giving the former 1st Round pick a major league contract to get him into the organization, Nats' GM Mike Rizzo said it was all about taking advantage of the ability to spend what they could while they were still able to before an anticipated change in the rules of the Draft.

#Nats prepared for the 2013 draft the same way they've prepared for every draft. But tonight, all they'll do is wait bit.ly/Zu35cg

Giving Strasburg and then Harper record deals for a pitcher and position players in consecutive drafts pushed the Nats over the top in 2009 and 2010. 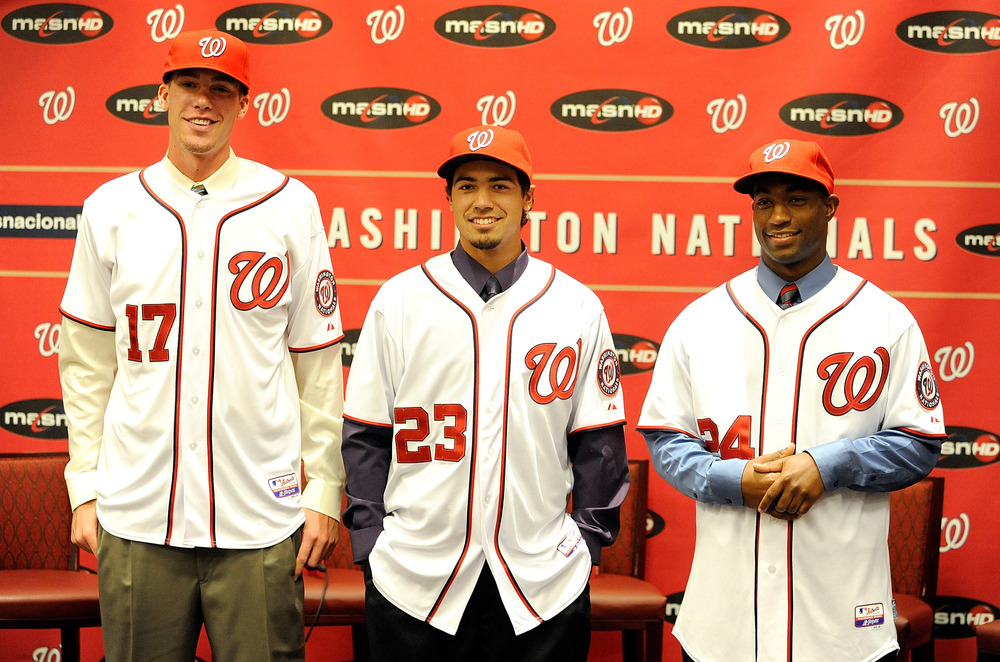 As Washington Post writer Thomas Boswell wrote of the Nationals' spending on the 2011 Draft, Washington, "stuffed dynamite in," MLB's, "slot system." As Baseball America's Conor Glassey wrote in August 2011, in the third straight year of big spending, Washington, "... blew past its old mark by giving $11 million in bonuses to its first three picks (Rendon, Alex Meyer, Brian Goodwin), and a $4.15 million major league contract to third-rounder Matt Purke, who hadn't been expected to sign." The Nationals also signed 4th Round pick LHP Kylin Turnbull, 5th Round pick 3B Matt Skole and 18 of their top 25 Draft picks.

In 2012, under the rules of the new CBA, the Nationals were given a prescribed total of $4,436,200 to spend on their top 10 picks. Washington selected the highly-regarded but injured prep-school right-hander Lucas Giolito 16th overall and went above the suggested $2,125,000 slot and gave the pitcher a $2.925M signing bonus. The Nats signed 14 of their top 15 picks and 23 of the top 25, adding the likes of IF Tony Renda (2nd), LHP Brett Mooneyham (3rd), OF Brandon Miller (4th), C Spencer Kieboom (5th) and RHP Robert Benincasa (7th) to the organization.

The Nationals parted ways with their top pick in 2013 when they made the decision to sign closer Rafael Soriano as a free agent this winter. Their first pick of the draft this year is now the final pick of the second round. "We pick 68th," Rizzo, the former scout and scouting director said in a mid-May MLB Network Radio interview, "And there have been plenty of good players taken 68th. I remember we took Jordan Zimmermann, I think, 66 or 67th and over the years there [have] been a lot of good guys taken in those rounds."

In an article last week, Assistant GM and VP of Player Personnel Roy Clark talked to the Washington Post's James Wagner about the decision to sign Soriano even at the cost of the top pick, which would have been 33rd overall:

"As scouting director and a scouting department, you don’t want to lose draft picks," Clark said. "But if Rafael Soriano is our first-round pick in this year’s draft, you know what? We’re going to be okay. That’s the way we gotta look at it. That’s a pretty good first-round pick."

"We're going to line them up and when our pick comes, the magnet that's at the top of the board, we're going to take..." - Nats' GM Mike Rizzo on picking 68th overall in 2013

"I've got great confidence in our guys that are out and about as you would imagine, grinding away," Mike Rizzo said in the MLB Network Radio interview, referring to the Nationals' scouts, "And we're all going to get together in Washington, put the board together, just like we have every other year and it doesn't matter that we don't pick until 68th, we're going to line them up and when our pick comes, the magnet that's at the top of the board, we're going to take and we're going to sign and develop and hopefully he can contribute to us."

Some Nats' 2nd Round pick history: The Nationals drafted Jordan Zimmermann 67th overall in 2007, in the first Draft after then-Nats' GM Jim Bowden brought Rizzo over from the Arizona Diamondbacks where he was the D-Backs' scouting director. Three picks after Zimmermann, the Nats selected infielder Jake Smolinski with the 70th overall pick of the '07 Draft. With the 55th overall pick in the 2008 Draft, the Nationals selected outfielder Destin Hood. Washington's second round pick in 2009 was the 50th overall pick, which they used to select infielder Jeff Kobernus. In 2010, Sam Solis was the 51st pick in the second round. The Nats didn't have a second round pick in 2011, losing it to the Phillies after they signed Jayson Werth. Last June, the Nationals' second round pick was the 80th overall selection which they used to take infielder Tony Renda out of the University of California at Berkeley.

"'We are going to get a good player where we pick,' Kline said. 'I would probably narrow it down to eight or nine names where I felt comfortable where a certain player would be there. But once you started getting later in process, it makes those high-school players a little more unsignable the deeper you get. That being said, you have to do something creative.'"

"'There are a couple of high-school pitchers, there is possibly a high-school catcher,'" the Nats' scouting director told MLB.com's Mr. Ladson, "'There are probably two or three or four college pitchers that may slide to us because they have struggled a little bit or getting tired later in the year.'"

The Nationals have $2,737,200 to spend on their first nine draft picks this season. Predicting who they'll select 68th overall? It was hard enough to predict which player the Nationals would take 16th last season. Rizzo said last June that the approach was the same as always. "Picking in the middle of the pack [16th overall]," the Nats' general manager explained, was just a matter of waiting and seeing what other teams did and then reacting, "It's kind of, we put together our list and the next guy that's on the top of the list is the guy you're going to take."

When the 68th pick comes around tonight they'll do the same.