You know how the statistic "Wins Above Replacement" means how far above or below "replacement level" a player is? (Sure!) Well, imagine the Twins' Kevin Correia as the replacement level player, and get not-extremely-pessimistic about the Nats' chances tonight in D.C.

The 32-year-old debuted a decade ago with San Francisco, pitching primarily in relief. Even in that role, he didn't strike out many more batters than average, and his control wasn't a strength, either. The Padres traded for Correia in 2009 and made him a full time starter. Sporting an ERA- of 102 and FIP- of 99 (100 is the mean for both), he was average in his first full year toeing the rubber ever fifth day.

Correia posted his highest K% as a starter -- 17.9% -- during his second season with the Friars in 2010. But, walks and a below-average strand rate caught up with the righty; his 4.71 FIP was 28% worse than league average. Since that time, Correia hasn't been better than 17% below average than other major leaguers when looking at strikeouts, walks, and home runs -- the things he has the most control over.

To be fair, xFIP likes Correia more than other metrics give him credit for, but he hasn't had a below-average HR/FB% since President Obama took office. If you believe that that figure is going to turn around in the future, you can bump him up some, but he really appears to be a pretty good real-life "replacement player."

According to the always excellent Brooks Baseball, Correia will come at the Nats with five pitches: a four seam, sinker, cutter, curve, and change up. Fangraphs classifies his cutter as a slider, so I've combined his cutter and slider value below.

Correia throws his cutter when he's ahead to lefties, and early in the count to righties. When he's ahead or has two strikes against righties, he'll drop the curve to induce swings and misses.

The next to last column will tell you what's giving Correia issues this year (and, as mentioned earlier, for the last three). Other than that, nothing in his profile is a real surprise or outstanding figure.

So, what's going on with his home runs?

Correia is performing worse against right handed hitters this year (.316/.344/.553) than lefties (.270/.310/.402), and this success is due to performance against his cutter and sinker. In fact, 61% of right-handed home runs against him have come on these pitches, and more if you thrown in the fastball.

One reason for his struggles could be his location. Below, you'll see how right-handers are getting meatballs through the middle and upper part of the zone, and aren't missing. While throwing over the middle isn't per se bad, once a hitter decides to swing, it's time for Correia to duck. This is especially true when, like Correia, your stuff just reaches into the 90's. 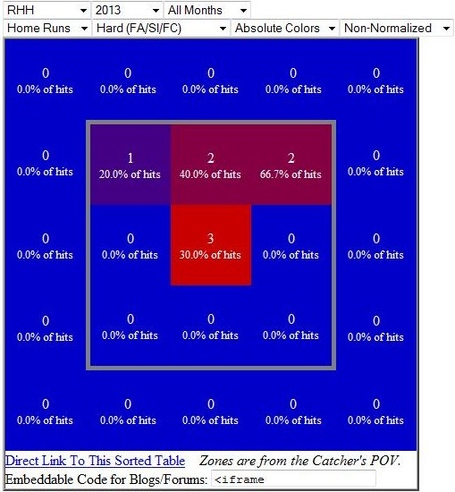 But the Braves also get good results when they make contact, whereas the Nats do not. Ian Desmond has had decent success on hard stuff from righties that ends up out over the plate, as has Jayson Werth in more limited duty. Ryan Zimmerman is there, too.

I think that, generally speaking, right-handed hitters will be in position to inflict the most damage on Correia tonight. He's replacement level, and a hurler who has a tendency to give up the long ball. While Nationals Park isn't Coors or Great American Smallpark (hat tip to all FB commenters for that one), I don't see any reason why Werth, Zimmerman, and Desmond shouldn't have opportunities to square pitches up, and drive them to the gaps (or, even better, over the fences).