Nathan Eovaldi takes the mound for the Miami Marlins in a very winnable series for the Nats. Eovaldi can throw the ball hard -- really hard, in fact -- but his major league pitching ability is still developing. I also chart the Nats' offensive platoon splits.

Share All sharing options for: Marlins' Nathan Eovaldi vs Nationals In Opener In Miami; Nats PDB

The Washington Nationals begin a three-game set against the Miami Marlins tonight at the site of the old Orange Bowl Stadium. The Fish run Nathan Eovaldi (the "o" is silent) out to the hill, and he opposes Stephen Strasburg. Eovaldi, 23, can throw hard. But is he a pitcher?

Eovaldi was drafted by the Los Angeles Dodgers in the 11th round of the 2008 draft. The Texan debuted later that year, pitching just over ten innings with two separate rookie league teams. Pitching for Low-A Great Lakes in 2009, the righty struck out 17% of batters he faced -- not bad -- but walked a fair amount (9.8%), too.

In 2010, Eovaldi pitched primarily at High-A Inland Empire, earning a 3.60 FIP. The consensus was at that time that there was some disappointment in his performance. For example, True Blue LA stated that

Eovaldi had an injury plagued and uninspiring season in 2010, which caused him to fall out of many of the prospect rankings. Baseball America was one of the few publications that had him ranked where he came in at #17, and he missed the lists of John Sickels', Baseball Prospectus, and Baseball HQ's. TBLA members gave him some respect and voted Eovaldi #19, although the final vote was very close and he nearly missed our top 20.

Eovaldi improved his strikeout rate at Double-A Chattanooga in 2011 (23.2%), but still had control issues. Nonetheless, because of injuries, the Dodgers called him up to start as a 21-year-old on August 6, 2011. At the time, Keith Law thought that he wouldn't become much more than a #3 or #4 starter, still a valuable piece.

In his first exposure to big league hitters, the 6'2 hurler would pitch to a 3.63 ERA over 10 appearances -- 6 as a starter -- but his strikeout and walk rates predictably went the wrong directions. Baseball America ranked him as the third best prospect in the Dodgers' system after the season.

Eovaldi has a big-time fastball, but unlike other power arms, he doesn't see a whole lot of strikeouts.

Among qualified pitchers, Eovaldi's 16.25% whiff rate with the heater would rank 63rd of 145 if he'd thrown just 11 more of them. But, he's got the fastest four seam in game (a leisurely 96.9 MPH) among pitchers who've thrown 100 fastballs. 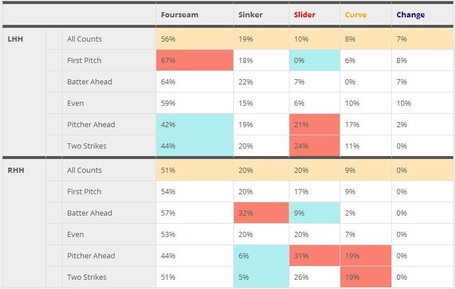 You'll see that Eovaldi prefers to lean more heavily on the curve and slider against righties when he's ahead or has two strikes, and he likes the slider against lefties in the same circumstances. Against righties, the curve has a 50% whiff rate, and lefties are swinging and missing 33% of the time against the slider. However, his slider isn't getting as many swings and misses against righties (17.6%), who are hitting .333 and slugging .667 on the pitch. So, it appears his choice of "out pitches" is fine. He may chose to move away from the slider, though, if right handed hitters continue to hit it well.

Ever wonder why Eovaldi's been able to sport a 2.55 ERA this year? No? That's probably good, actually. But if you did, you'll see two component stats below that help explain why he's seriously out-pitching his FIP.

According to my xBABIP calculator -- hold on while I push my glasses back up my nose -- Eovaldi should be seeing a .274 BABIP. That's a significant difference from his actual figure. His LOB% is 8% higher than the Major League average, also.

And the two figures are in fact related in one sense: While Eovaldi has a .244 BABIP with no one on base, with runners on he is seeing a .120 figure. If batters get hits just 12% of the time when runners are on, your strand rate is probably going to be seriously high, and Eovaldi shows that here.

I can say with 99% certainty that Eovaldi won't continue to see a tremendously low BABIP and LOB%, and consequently, he won't be the second coming of Don Drysdale.

What can the Nats use to their advantage, though? Eovaldi is throwing his fastball at least 10% more often this season when compared to previous years, and he works it primarily away and down and away to lefties and mostly down and away from righties. Considering the velocity on the pitch, Washington would do well to have a an opposite-field approach, in an effort to hit the ball where it's pitched. Also, he's throwing first pitch strikes just over half the time (about 52%), which is rather low. Still, it has been a pretty small sample so far.

This season, the Nats' right handed hitters are actually doing an above average job at going to the opposite field -- 11% better than average, actually -- while Washington lefties are performing 24% worse than the average left handed hitter when going the opposite way.

I noticed something else while looking at Eovaldi that I thought was worth showing. On the whole, batters with a platoon split perform better than batters facing a same-handed pitcher. No shocker. So, how well are the Nats' hitters doing here? Unsurprisingly (and sadly), not well.

First, here are Nats lefties versus righties (of which Eovaldi is one), with the team cities above the appropriate marker: 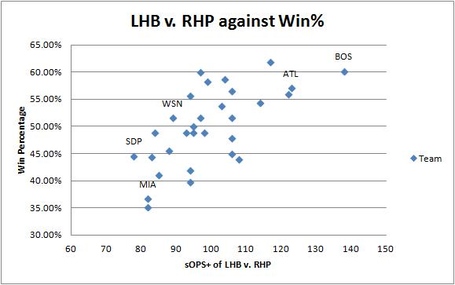 A lower sOPS+ is worse, and there aren't many teams to the left of the Nats. However, this isn't everything that goes into team performance, and a uptick to average from 25th best in the league would be a nice way to improve the team's record.

It's much the same story when D.C.'s righties face southpaws: 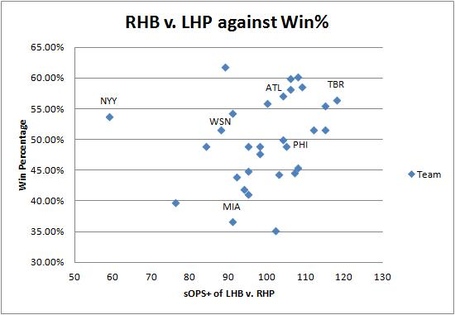 I guess at least they aren't the Yankees? But, there are even fewer teams worse than the Nats in this regard. Considering both that the majority of pitchers in the majors are right handed and that 34% of the Nats' at bats this season have come in the above case, this is really where the team needs to improve.

It's bad when you'd rather Davey run right handed hitters out there (.708 OPS against RHP) than lefties (.706 OPS against RHP), or at least have to consider such a move. Therefore, it seems the offense particularly needs to get rolling against opposite handed pitchers, where the majority of the rest of the league is playing far better.

The Nats should beat Eovaldi. He isn't a big strikeout pitcher, and he walks a fair number of guys; in essence, he is more of a thrower than a pitcher, at least for right now. Furthermore, once he gets into good counts, his out pitches are fairly predictable (if respectable at getting whiffs). Hopefully, the platoon should be an advantage this evening, and Washington can start a very winnable series off right.