Wily Peralta, Opposing Starter for the Milwaukee Brewers versus the Washington Nationals at Nationals Park, the Nats' Chances at Three Wins in a Row, and Asking for Your Thoughts on Command

The Milwaukee Brewers send Wily Peralta to the hill against the Nationals tonight. Peralta is a young hurler with a pretty good pedigree, but has yet to see consistent results this year. At the same time, some peripheral measures suggest he's had a little bad luck. How might he attack the Nationals this evening?

Share All sharing options for: Wily Peralta, Opposing Starter for the Milwaukee Brewers versus the Washington Nationals at Nationals Park, the Nats' Chances at Three Wins in a Row, and Asking for Your Thoughts on Command

Summer in D.C. means oppressive heat, tourists, a pretty cool fireworks show on Independence Day, and apparently the waking of the Nats' offense, with a healthy Bryce Harper leading the charge. Tonight, the Nats try to make it three in a row as they take on the Milwaukee Brewers. Wily Peralta takes the ball for the Brew Crew.

Peralta was signed by the Brewers as an amateur free agent from the Dominican Republic in 2005. Shortly after signing, the team converted him from outfielder to pitcher, a move which appears to have paid off so far.

Peralta has pitched at nearly every level of the minor leagues, from rookie ball to Single-A to Double-A to Triple-A. In 2007, the righty underwent Tommy John surgery. After returning to the bump in 2008, he showed flashes of strikeout potential (rates of 30%, 23.6%, and 32.8% at three different levels over four years), and ended up striking out 21.8% of minor leaguers he faced before being promoted to the Show in 2012. His debut was a success: Over 29 innings and five starts, Peralta pitched to a 2.65 FIP.

The top Brewers prospect at the time of his promotion, John Sickels wrote of Peralta in late September 2012 that

Scouts used to see him as a future reliever due to his health history, impressive fastball/slider combination, and occasionally spotty control. However, he's made enough progress that most now see him as a starter, ready to contribute in 2013. I like him quite a bit, being a big fan of the strikeout/grounder combination, and he's usually looked very good when I've seen him in person.

Further development of his command and the changeup will determine if he develops into a number three-type inning eater, or into something more. Assuming that his arm is OK, I tend to optimism with Peralta.

Other minor league evaluators were on board, too. At the beginning of 2013, Project Prospect teased at Peralta's potential:

If you want to see one of the game’s better sinkers (especially for a starting pitcher), look no further than Wily Peralta. This pitch is what has caused Peralta to be heralded as Milwaukee’s top pitching prospect, and it is also what will allow him to be successful at the major league level—if he can command it consistently. He throws it 91-97 MPH and gets plenty of ground balls, which is especially beneficial since he pitches half of his games in hitter-friendly Miller Park.

Because his secondary pitches still need refinement, he won’t be posting large strikeout numbers—at least not yet. His slider is his second best pitch, which he will eventually learn to use more effectively in two-strike counts. While his control will likely remain an issue, Peralta has the stuff to be a very good pitcher.

Some outlets were high on Peralta as a breakout candidate this year. However, he hasn't yet lived up to his promise -- admittedly more modest than that of say, Shelby Miller or Matt Harvey -- just yet (4.59 FIP, +0.2 fWAR over 92 IP). And his strikeout rate (12%) and walk rate (8.7%) aren't all that great, either.

Peralta checks in with a four seam fastball, sinker, change up, and slider. He's bread and butter usage-wise is a 95 MPH sinker, but you'll see that no pitch really jumps out on a value basis.

For some reason Peralta is throwing his sinker to lefties more often than righties. This is not general practice because lefties hit sinkers on the whole better than righties when a right-hander (like Peralta) is pitching. Anyway, it's not fooling lefties, because they have a sterling .400 wOBA against the pitch. Hopefully he'll continue pumping them in there tonight.

You'll note that Peralta is seeing a good number of ground balls this year, consistent with his scouting reports. But check out the home run/fly ball rate and left on base percent columns on the right of the chart, which are each above the average major league values (in a bad way) this year.

Yea, Peralta's stranding just over half of all base runners. For context, the average major league pitcher strands close to 75% of all players who reach base. This performance has to be cited as one reason why the Dominican has had a bit of a rough start.

Considering the scouting reports and his numbers so far this year, I looked more in-depth at Peralta's LOB% and his sinker command.

Of all qualified big league twirlers, Peralta is dead last in strand percentage this year.

But if you look at his numbers, Peralta actually isn't pitching much worse (by most mesaures) with runners on base. His triple slash line with runners on is .286/.348/.440, good for a tOPS+ of 103. tOPS+ measures how a player performed in certain splits relative to his overall performance, with 100 being the player's overall average and lower being better. Basically, the 240-pounder has performed just 3% worse than he normally does with runners on.

The BABIP gods aren't punishing Peralta, either. With men on base, the major league BABIP is .301. The 24-year-old is rocking a .299 number. Therefore, it doesn't seem like this is accounting for the bulk of his issues; this is particularly true considering his .284 BABIP with runners in scoring position.

And then you get to the home runs, which are sailing out of the park when men are on base. Peralta's HR/FB rate of 18.2% with runners on is the 7th highest mark in the majors this year, and he's given up the majority of his homers with guys on. Overall, ESPN's Home Run Tracker has just 3 of Peralta's 10 home runs as "just enough" to clear the fence, although only one of those was hit less than 400 feet.

Sickels and Project Prospect both remarked on Peralta's command, and how an improvement in that area of his game could mean more consistent results.

Before jumping into Peralta's present command -- and if anyone has somehow made it this far -- I wanted to ask the commentariat and readers what they think "command" means. There's plenty of disagreement. Many (most?) refer to it as a subset of control, that is, whether a pitcher can consistently locate pitches where he wants them. Others insist that command means a pitcher's ability to get reliable movement on pitches. If you care to, leave your thoughts with the poll or in the comments section. I think there's probably a need for some third term to describe whichever feature doesn't represent command, so please make suggestions on that too if you like.

If you're in the "precise location" camp, here's where and how often Peralta has thrown his sinker to lefties this year (who, remember, are seeing more sinkers and performing better against the pitch). It's not perfect, because we can't know where Peralta meant to throw the pitch, but it's close enough: 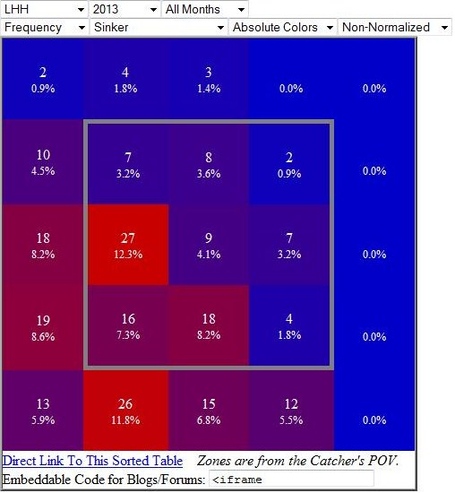 You'll see most sinkers are outside to lefties, and low as well. Not too bad, I'd venture, but then again lefties are lighting his sinker up. So maybe he's just locating poorly at bad times (as the quick glance at his home runs suggests).

If you favor command equaling reliable movement, Peralta appears not terrible here. This is best shown when we view his home starts -- the advantage here is that we see the same PITCHF/x system tracking movement. Below charts all starts, with one point per game: 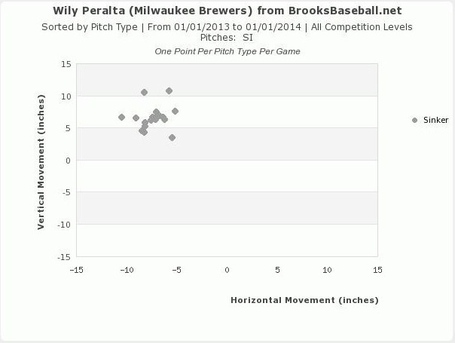 The cluster in the center shows most of Peralta's home starts, where his sinker has seen consistent movement. At the same time, his horizontal movement with the pitch has steadily decreased as the season has gone on. In sum, if looking at movement to determine command, Peralta has shown some signs of reliable results, but still appears to be maturing in this respect.

How is Peralta different from Justin Masterson, who was right-handed, sinker-focused, threw in the 90's, and was projected as a tough assignment? In a sentence: Peralta walks more, strikes out less, and his sinker isn't as effective. Combine that with the Nats' offensive prowess lately, add in slightly below-average Milwaukee fielders, and this looks a lot like a game where Washington should have some scoring opportunities. Hopefully, they make it three in a row this evening.

Big thanks to Baseball Prospectus, Baseball Reference, Brooks Baseball, and Fangraphs for data, and Crashburn Alley for the wOBA calculator.