Zach Greinke is a talented pitcher with a great major league track record who the Nats once targeted. Pitching for LA, he's had a decent year, but fans expect greatness with nine-figure contracts. Greinke's inconsistent movement may partially explain some of his average play so far this year.

Share All sharing options for: Zach Greinke And Dodgers vs Nationals: Nats PDB

The Washington Nationals take on the Los Angeles Dodgers in the second of a three game set tonight at Nationals Park. Zach Greinke toes the rubber for L.A. Most every game is in some way critical; tonight may be one the upper end of that scale, considering that the Nationals draw Clayton Kershaw, or the Evening Redness in the West, tomorrow.

What can the Nats look for from Greinke?

The Kansas City Royals drafted Greinke with the 6th overall pick in the 2002 draft. Baseball America pegged him as the best prospect in the Royals' system in both 2002 and 2003. The publication also tabbed him as the 54th and 14th best prospect those years, respectively.

But during the 2005-2006 offseason, Greinke batted social anxiety disorder. He considered quitting the sport, admitting later that "I'm surprised I came back, to tell you the truth" to Michael Hunt of Milwaukee Journal Sentinel. For this reason, he threw just over 100 professional innings in 2006 (only 6.1 of which were in the bigs).

Not only did he come back in 2007, but he brought strikeouts with him. Where he was below average in strikeout percentage in '05 and '06, he was above average from '07 on. Progress followed in other areas, too, as the table at right shows.

2009 was nuts; your author was such a fanboy at the time that he even bought a promotional t-shirt, even though I had no attachment to him or the Royals. Still, +9.1 fWAR and +10.4 bWAR win seasons don't come along all that often, and his Fangraphs' mark ranks him 12th in single-season pitcher WAR since 1988.

Greinke throws quite a few pitches: a four seam fastball, sinker, change up, slider, curve, and cutter. He primarily works with hard stuff, particularly early in the count against right handed hitters.

The sinker and fastball are plus offerings if you want to go by value, while the cutter lags a bit behind. If you go by Brooks Baseball's classification and results, the cutter looks a lot better (.191 BA / .368 SLG in 68 ABs) and the sinker worse (.307 BA / .387 SLG in 75 ABs). The batted ball results are probably the best indicator when you consider some of the drawbacks of the "value" stat, so the reality may be in the middle.

Situationally, Greinke goes to his cutter most often in two-strike counts against righties (32%), while almost going to it against lefties nearly as often (28%). He often throws a fastball and sinker when batters are ahead in the count, while he'll pitch a curve 12-14% of the time no matter the case against lefties.

The real surprise here is Greinke's line drive rate, which is around 4% higher than his career average. If he hadn't suffered a broken collarbone in a brawl earlier this year, he'd have the 8th highest value among major league pitchers.

We had a "command" poll a few PDB's ago when the Nats faced Wily Peralta. The results were, um, pretty conclusive: 29 people understand "command" to be the ability of a pitcher to put pitches precisely where he wants them, while 1 person understood it to mean the ability to generate reliable movement on pitches. Well if that one person is reading, I guess you're in luck.

Below, I've posted movement data for each of Greinke's pitches for each month this year. Clicking the image will switch it to 2012, when he posted a +4.8 fWAR, and a point represents each month of the season. 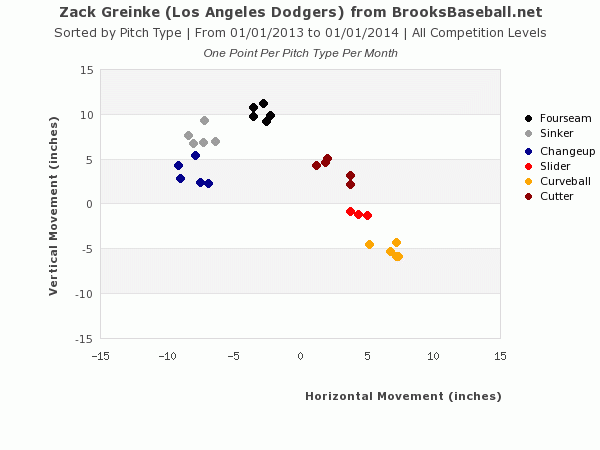 See the distinction between the tighter groups in 2012 against the more varied clusters this year? That's more inconsistent movement in 2013, particularly with the sinker and change up, and it may be an explanation for why he's walking more guys than last year. This is supported in part by his low looking strike%, 26%, which is 3% less than his career average and 6% less than last year. His swing rate is basically at his career average, too.

However, Greinke didn't give up a run in his two starts prior to the All Star Break, and he was getting some pretty inconsistent movement there, too. Unsurprisingly, then, this may only be part of the reason why hasn't performed quite as well this year as he did last season.

Beating Greinke would certainly be a jolt in the arm for the home team. And with each passing day, the voltage required to propel Washington towards the playoffs becomes stronger and stronger. Lefties have given him problems this season, but we know the Nats haven't lived up to the latter half of the phrase "platoon advantage" in 2013.

It's time for the team to right the metrics that they are supposed to do well in. A rested squad at home, the Nats should be in good shape to attack hard pitches that Greinke will inevitably deliver, while disciplined at-bats may reveal movement inconsistency that helps the team generate baserunners (and runs).