Yeah, the umps seem to be either incompetent or corrupt and may have cost the Nats the game, but the Nats had other chances that they missed all on their own. 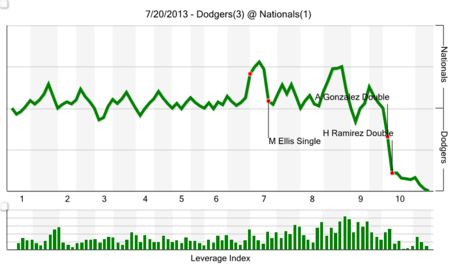 So, Doghouse, what umpires were terrible tonight?

Am I really that predictable? I suppose so. Eric Cooper was incompetent at 2B, probably costing a go-ahead chance when he called Span out in the aeyth. As for HP ump Chad Fairchild: 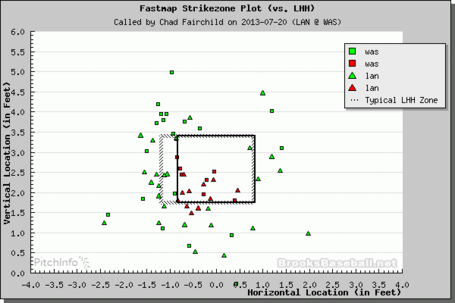 Squares are the Nats, and triangles are LA. Lefty strike zone looks okay, albeit a bit low. For LA. 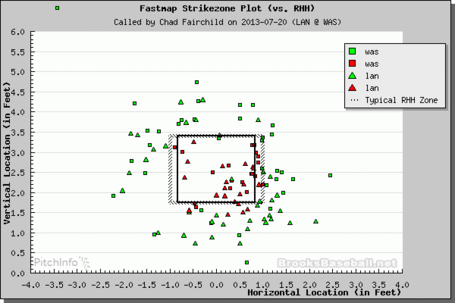 So. LA got jobbed once in the middle of the zone, but they got a lot of low calls, lower than the Nats did.

Why was Werth so mad?

Well, both he and Desmond got called out on the pitches right on the edge of the zone, but they were strikes. They were even on the edge of the rulebook zone, not the dashed "as typically called" on the plots above. I'm assuming the frustration just boiled over for him and Desi, but the beef with the ump wasn't a bad call, at least not in the tenth. Feel free to call Fairchild a bum next time you see him at a game, though. And especially call that no-good bum Cooper a no-good bum!

A random note on lineup optimization

Someone asked in the comments last night about optimizing lineups. The chapter in the seminal sabre treatise The Book (by Tango, Lichtman, and Dolphin) dealing with that subject pegs the value of optimizing a realistic lineup of 9 players at 10-15 runs per season, or about a win to one-and-a-half wins. Any errors Davey has made in constructing the lineup (since it's probably not that far off from optimum, even if it isn't optimal), are likely to have cost the Nats a quarter of a win or less so far this season.