Gerrit Cole And The Pirates vs The Nationals Tonight: Nats PDB

Gerrit Cole brings a top of the line prospect pedigree and tantalizing stuff to Nationals Park tonight in the second of four games against the Pirates. While Cole doesn't generate a lot of strikeouts, he's still effective. The Pirates have a good one, and there are recent signs his offerings are getting better.

Share All sharing options for: Gerrit Cole And The Pirates vs The Nationals Tonight: Nats PDB

Gerrit Cole, Francisco Liriano, A.J. Burnett, Matt Harvey: These hurlers oppose the Nationals over their next four games. When Cole, the former #1 draft pick in 2011, is the "best" assignment of the bunch, it's going to be a tough couple games for the offense...or tougher than the already difficult task that it has been. Who is this Cole fellow, and what should the Nats expect to see this evening?

Cole was taken by the Pirates at the top of the 2011 draft. He debuted for the Rookie League Solar Sox in late 2011 over 15 innings of work, and Baseball America pegged him as the 12th best prospect before 2012.

During his first extended time in professional baseball, Cole showed excellent strikeout numbers and respectable control for a 21-year-old. Pitching at three different levels (High A, Double A, and Triple A), he racked up a 1.19 WHIP and a 3.02 K/BB ratio. It was enough to improve his already high stock, as Baseball America bumped him up to the seventh best prospect in the game before 2013.

Fangraphs' prospect watcher Marc Hulet said of Cole before this year that "[t]he right-hander’s greatest strength is his heater, which can tickle triple digits and sits in the 93-96 mph range. His second best pitch is a dominating slider. He also has a curveball and a changeup."

The standout thing about Cole is that he can dial it up to speeds that when driving might get you jail time in the Commonwealth.

In fact, Cole's heater is second in velocity only to another PDB'er - Nathan Eovaldi. But speed does not necessarily equal success, and batters are hitting the four seam to the tune of a .382 BA/.509 SLG.

You'll see also that his slider is averaging over 90 MPH, which is the hardest slider in the majors when using a 50-pitch threshold. Fangraphs' values have it as a good pitch in limited duty so far, which jives with Hulet's assessment.

Cole really isn't trying to do anything too fancy, which may explain why he's not getting more strikeouts despite the "stuff" to make it happen. You'll note the emphasis on hard stuff early in the count or when he's behind, and an increase in offspeed/breaking pitches when ahead or with two strikes. 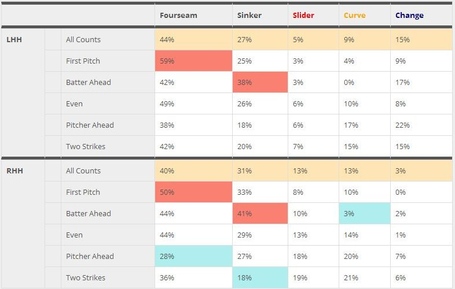 Indeed, Hulet reported before the UCLA product's debut that "a scout told me Pirates pitching prospects typically had underwhelming strikeout rates because they’re taught to favor two-seam fastballs — rather than four-seamers — to pitch to contact and to keep their pitch counts down." If that's true, it helps explain his pitch usage and approach against hitters.

His profile is a bit similar to Zach Greinke, in that he's giving up plenty of line drives. But the ground ball rate is much higher than Greinke's, who was in the low 40's percentage-wise, and he's seen a much lower HR/FB rate, albeit in fewer innings:

Maybe the Baseball Gods are equaling Cole out with the low HR/FB and high BABIP, but his line drive rate suggests he's earning the latter. What is somewhat surprising is that the 6'4 twirler's sinker, which is going for ground balls 57% of the time, has a .300 BABIP.

Yet, the four seam is definitely driving his high rate of hits on balls in play. With a .417 BABIP, Cole is at the wrong end of a top 10% major league ranking. This is not likely to continue considering his velocity and what I assume will be improved command as he becomes more comfortable pitching in the majors. I am curious whether it will affect his pitch selection in the short term, given the success batters appear to be having against the pitch.

One of the lesser heralded of Cole's offerings is his change up, but he's really done well in recent starts to kick up his whiff percentage on the pitch. Prior to his fourth start against Milwaukee, the pitch owed a 14.29% whiff/swing value. That's putrid.

Since? Well, see for yourself:

From June 28 on, Cole has achieved a 41.6% whiff/swing rate on the change, with the bulk of the fanning coming when he faces lefties (pitchers often throw off speed to opposite-handed hitters the most). That's much better, and if he's able to maintain his current 35.5% rate, his change up can all of a sudden be a third quality offering.

Let's cross check who Cole was facing, though. How good are the Brewers, Phillies, A's, and Mets -- who were his four most recent opponents -- against the change up? Overall, pretty good: 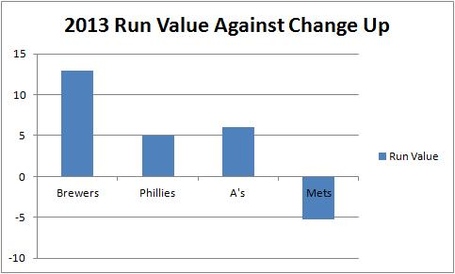 From left to right, the teams rank 3rd, 8th, 7th, and 22nd in the major leagues against the change up. Although run values aren't perfect, they are good enough to conclude that Cole's faced some teams that hit the change well. So, it may be interesting to watch his use of and results with the off speed tonight.

Generally speaking, I think Cole will be predictable in his sequencing tonight. This is mainly because the Pirates have emphasized efficiency over big strikeout numbers with their prized prospect. At the same time, Cole is seeing some good results with a pitch that wasn't supposed to earn top billing (the change), while his signature heater is getting knocked around.

It will be interesting to see if Cole adjusts his approach because of the ying and yang of fastball/change results in 2013. The Nats hit change ups pretty well -- they rank 4th in the majors by value -- so the young righty will face another good-hitting offspeed team (that can't have been said about Washington's offense much, if at all, this year). Hopefully the good guys can leverage what appears to be an actual strength tonight.