What is with this umpiring crew? Someone send 'em a copy of the rule book, maybe with illustrations of what a glove touching a player looks like and where home plate is. Wait, did the Nationals do something this game? 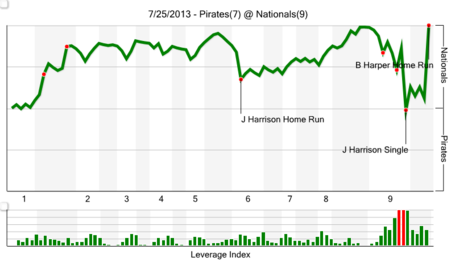 So, Doghouse, is today's home plate ump Mike Winters getting a spot on The List?

Look for yourself! What is this strike zone I don't even... 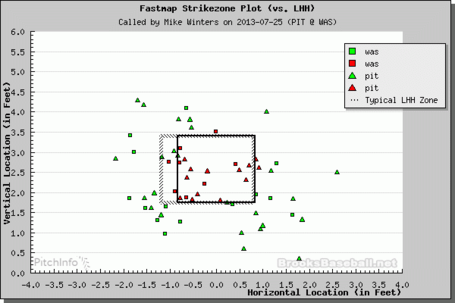 Red are called strikes, green are called balls. This is just... WAT? Low strikes.. sometimes... wide strikes... sometimes... high strikes... sometimes... even the obligatory balls over the plate. It wasn't biased, I suppose, since both teams seemed to get hit with the random calls. Still, make your zone consistent. That means the same zone for both teams, and the same zone for the whole game. Also, the "wide" strikes were much worse than the typical one-ball-width most umps give around the plate (the dashed-box "as usually called" strike zone on the plots versus the solid-line rule-book zone)--they were essentially in the LH batters' box for the RHs. As Dave Jageler put it, "it's a different interpretation." Or, as I'd yell if I were at the ballgame today, "LAAAAAAAASSSSIIIIIIIIIIIIKK!!"