Taylor Jordan is in his first full season back from Tommy John surgery, and every team in the Major Leagues had the opportunity to claim him in the Rule 5 draft recently. Now, at age 24, he's a bona fide major league starter.

Aside from some memorable walk-offs recently, the Nats' performance after the All Star break has been poor. Injuries and ineffectiveness are partially to blame, but these have also given Taylor Jordan an opportunity to step forward and solidify his right to compete for a rotation spot in 2014. Underlying his success, I think, are some encouraging signs.

Jordan had Tommy John surgery in September 2011, and it's safe to say he wasn't blipping many prospect watchers' radar. In their 2012 review of Nationals prospects, Baseball Prospectus ranked Jordan 15th, saying that the righty was a "[g]roundballer who throws strikes, but there are questions about ability to miss bats as he moves up."

The Nationals Review looked at this and other scouting reports on Jordan in June 2013. Adding the reports together, they concluded that

[h]e’s got good control (ability to throw strikes), judging by the lack of walks throughout his career. But what we don’t know is his command (ability to hit a spot) and it will be interesting to see how he does there.

In Jordan's five starts this year, he's done quite well for a relatively unheralded 24-year-old. His ERA, if you prefer to assess him that way, is 3.68. His FIP is nearly identical (3.70), and so is his xFIP (3.78). Fangraphs values him at +0.4 WAR, a pretty good mark over his current 30 inning career. In the interest of full disclosure, though, Baseball Reference values him much less (-0.1 WAR). Most recently, he was a Rendon misplay away from a tremendous (rather than a simply good) start.

Here are three reasons why I think Jordan's modest success so far is real.

While K/BB ratio is a worthwhile measurement, Glenn DuPaul argues in this article that K%-BB% is a better measurement of pitcher talent, because low walks can mask a lack of strikeouts.

Jordan's underlying metrics show what the scouting reports predicted: low strikeout totals (11.2%), and similarly low walk totals (3.2%). At 3.5, his strikeout to walk ratio would place him 24th in the league out of 91 qualified pitchers, if he had about 70 more innings to his credit.

But with K%-BB%, Jordan is a more pedestrian 8%, or 3% below the 2012 average. Factoring in that DuPaul likes K%-BB% as more of a predictive stat and that Jordan may be able to bump his K% up some with further development, it's not currently a red flag. Indeed, Kyle Kendrick, Jhoulys Chacin, and Kevin Correia all have values around this mark. All are capable hurlers (and PDB'ers, too). So, keeping all that in mind, I think "fair" is an appropriate description.

What else is cause for enthusiasm? Amanda Comack wrote earlier this year (before Jordan debuted) that "what Jordan also has working for him is a unique delivery and arm action that allows him significant deception. His ability to repeat it is what makes it so effective."

Some evidence that Jordan has been able to sustain delivery repeatability in the majors can be seen in his vertical and horizontal release points.

First, here is a plot of his vertical release point in each of Jordan's career starts; the upper and lower bars are where 95% of his results end up, measuring by whether the pitch was inside or outside the strike zone:

The release point height on the left of the graph shows a total difference of roughly .35 of a foot between his lowest and highest release point. Not surprisingly, these are "out of zone" pitches. But really, he's mostly been working in a .25 foot window for the majority of his starts. If you want to see how it looks from the catcher, click here. Either way, this isn't much vertical variation, and that's good to see.

Now his horizontal release points, again on pitches inside and outside the strike zone:

At first glance, there may appear to be a little less consistency here, and again you'll see where he's varying the most when pitches end up out of the zone. No shocker. But the scale is important: The upper and lower extremes are just .30 feet apart, and his average window is closer to .20 feet.

It's encouraging that Jordan can show some consistency with release points, because this leads to more reliable movement and control while also minimizing delivery issues that hitters may pick up on.

In addition to his good component ratios and delivery consistency, Jordan has a pretty good batted ball profile. He's seeing a below-average number of line drives while getting a ton of ground balls (almost 62%), much like scouts and writers predicted.

It's not all roses here, since Jordan's working with a .333 BABIP. But there's room for hope.

Let's look at grounders, since that's Jordan's bread and butter. For the year, the major league BABIP on grounders is .231. Jordan's BABIP on ground balls is much higher -- .286! This mark is part of the reason why he's performing 30% worse than the average pitcher when a batter hits the ball on the ground.

In the interest of full disclosure, the Nats are seeing a .252 BABIP on grounders this year. Many things could explain this; the grounders could be hit really hard, the defense could be out of position, the defenders may have poor range, or maybe all of these are happening at once. I don't have enough data, but if you just want something, UZR isn't a fan of D.C.'s defense. Anyway. Back to Jordan -- at .311, his expected BABIP is also lower than his present mark.

Just a bit more on Jordan's batted ball results, which are significant because he doesn't strike a lot of guys out. He's showing a slight reverse platoon split (110 sOPS+ versus RHB, 94 versus LHB), and righties are getting really fortunate on batted balls (.396 BABIP), considering their 65.5% ground ball rate.

But the Floridian has generally done a pretty good job to keep the ball low against righties: 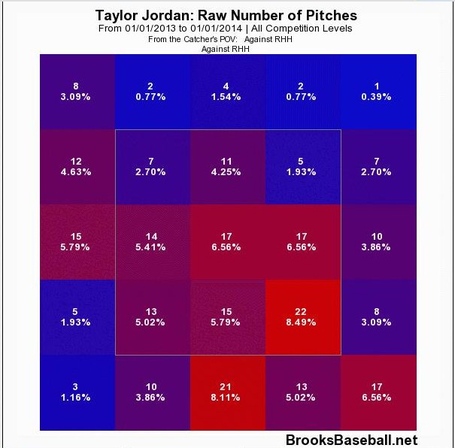 Despite this command -- which Nationals Review highlighted as a "to-watch" issue -- he's getting shellacked by the BABIP gods, particularly with his primary offerings, a four seam fastball and a sinker: 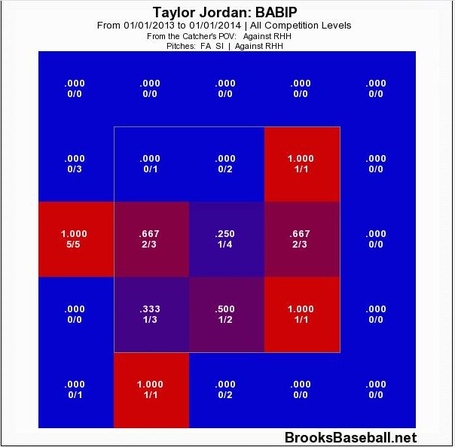 Good lord! It's like Denard Span's results this year, only the complete opposite. I can't help but think this profile will look different in the future.

In sum, no, Jordan doesn't dominate hitters with strikeouts. But even there, he's doing what he has to by limiting walks. His release point is steady, and on the frequent occasion when batters put the ball in play, they are usually doing so on the least damaging of contact results -- ground balls. And there, too, there's reason to think his results can get better. Equally encouraging is the fact that his component stats match up with scouting reports.

Taylor Jordan has accomplished a lot this year, and that's not false praise. I think he has legitimate potential to contribute to the starting rotation for several years to come.

Thanks to Baseball Reference, Brooks Baseball, and Fangraphs for data.