Nationals 4-1 Over Mets: Dan Haren With Seven Strong In Win

Share All sharing options for: Nationals 4-1 Over Mets: Dan Haren With Seven Strong In Win

Dan Haren's 19th start of the season for the Washington Nationals began with two quick outs, then all the Nats fans in Nationals Park held their collective breath as David Wright hit a 1-1 cutter to left field and... foul. Wright sent the next pitch out to second, however, where Anthony Rendon committed his 11th error of the season on what should have been a routine groundout. Haren had to throw three more pitches, for 11 total in the first inning, before Marlon Byrd lined out to right to end the opening frame.

Ryan Zimmerman looked down to see where third base was, then looked back up to track an infield pop off Ike Davis' bat which he caught for the first out of the Mets' second. Two groundouts to short later, Dan Haren had two scoreless innings on the board. Haren's 13-pitch, 1-2-3 second had him at 24 overall after two.

Ian Desmond worked the count full against Dillon Gee after Adam LaRoche and Jayson Werth went down in quick succession in the Nationals' second, and Desmond unloaded on a full-count changeup, sending HR no. 16 of 2013 sailing over the #NATITUDE wall in center field for a 1-0 Nationals' lead. Denard Span made it back-to-back blasts on back-to-back pitches when he sent a fastball from Gee out to right and just over the out-of-town scoreboard for his first home run of the year and a 2-0 lead after two. It was Span's first home run since last October.

Given a two-run lead to work with, Dan Haren walked the first batter he faced in the third, putting Omar Quintanilla on to start the Mets' half of the inning. Dillon Gee bunted the runner over/gave up an out. Quintanilla took third on a sharp one-hopper to first by Eric Young that Adam LaRoche gobbled up and Daniel Murphy sliced a 1-0 curve to left that Bryce Harper tracked down for out no.3 of an 11-pitch third inning that had Haren up to 35 pitches overall. Haren picked up a bat in the bottom of the third and doubled for the third time this season when Dillon Gee left an 0-2 slider up for the opposing pitcher. Bryce Harper got hold of an 0-1 fastball from Gee in the next AB and sent a two-run home run out to center field that made it 4-0 Nationals after three in D.C.

David Wright singled to start the Mets' fourth, but after Haren struck Marlon Byrd out with a 1-2 fastball, the Nats' starter got a grounder to first out of Ike Davis that allowed Adam LaRoche to start a 5-3-5 inning-ending DP. The 12-pitch inning had Haren up to 47 overall after four. Dillon Gee needed just five pitches to retire the Nats in order in a quick bottom of the inning, after which Haren came back out with a 14-pitch, 1-2-3 fifth that had him up to 51 overall in 5.0 scoreless innings in the nation's capital. Bryce Harper singled with two down in the Nationals' half of the fifth, but he was stranded at first when Anthony Rendon lined out to Mets' center fielder Juan Lagares.

New York finally got on the board in the sixth, breaking up Haren's bid for a shutout. Eric Young singled with one down, stole second one out later with David Wright up and scored when the Mets' third baseman got one by the Nationals' third baseman, sending a hotshot by Ryan Zimmerman at third that brought Young in from second to make it a 4-1 game in Nationals Park. Jayson Werth singled in the bottom of the sixth, but he too was stranded when Ian Desmond flew to right to end the inning. The 26-pitch frame had Haren up to 87 pitches overall. 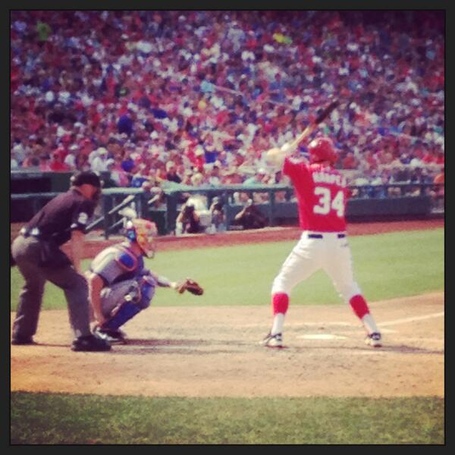 Haren came back out for the seventh and recorded two more Ks in a 16-pitch frame that had him up to 103 overall after seven innings of work in which he allowed just three hits, a walk and a run while striking out six. Roger Bernadina hit for Haren with two down in the seventh, but flew out to right to keep it 4-1 Nationals after seven in Washington, D.C.

Tyler Clippard took the mound in the top of the eighth inning and retired the side in order in a 14-pitch, two K inning of work. Josh Edgin came out to face Bryce Harper in the bottom of the eighth, lefty vs lefty, and struck Harper out with an 0-2 slider. When the Mets went the pen again, the sky opened up and sent the game into a rain delay...

One hour and two minutes later...

... Anthony Rendon stepped in against Scott Atchison and flew out to right field for out no.2 of the Nats' eighth. Ryan Zimmerman lined to right in the next at bat with Marlon Byrd making a diving catch and then the Nationals made a call to the bullpen...

"Pitch it, Soriano! Pitch it, Soriano! Strike him out, Soriano! Strike him out, Soriano!" Rafael Soriano came out of the pen looking for save no.26 of 2013. Daniel Murphy went down 0-2 quickly but battled back and lined a single to right to start the top of the ninth. David Wright flew out to Jayson Werth on the wet track in right. Marlon Byrd lined to Werth for out no.2. Ike Davis stepped in next and worked the count full, but took a called strike three to end it. Ballgame.