Can The Nationals Catch The Braves? Mike Rizzo And Davey Johnson Still Believe...

Davey Johnson and Mike Rizzo talked to reporters this weekend about not giving up on the 2013 season just yet. Of course, they're not going to say they're packing it in, but will the Nats' actions before the deadline show what they really believe?

Share All sharing options for: Can The Nationals Catch The Braves? Mike Rizzo And Davey Johnson Still Believe...

Mike Rizzo and Davey Johnson might not have been on the same page when it came to the firing of hitting coach Rick Eckstein. As the Washington Nationals' GM and manager told reporters this weekend, however, they still think the Nats have a run in them, so they haven't given up on the 2013 Nationals' chances of making noise in the last two months-plus of the regular season.

"I think division is going to be interesting," Davey Johnson said, "I've felt all along that it's a long way from over. I mean, the Dodgers came from what, last place?" - Davey Johnson on the Nats' chances in the NL East

"I think division is going to be interesting," Davey Johnson told reporters last week when asked how he felt the NL East race was shaping up. "I've felt all along that it's a long way from over. I mean, the Dodgers came from what, last place? Had a good run. What was it? 23 out of 25 or something?"

Los Angeles went 21-5 over a 26-game stretch from June 22nd to July 22nd taking them from 30-42 in fifth place in the NL West to 51-47 and first place, with a sweep of the Nationals in Washington from July 19-21 putting them a 0.5 game out and a 14-5 win over the Toronto Blue Jays the next night finally lifting them to the top spot in the division.

"That's all it takes," Johnson said.

"That easy?" a reporter asked.

"It's that easy," Johnson responded, "Yeah."

The Nats' skipper said it before his team went out and dropped an 11-0 decision to the New York this past Friday afternoon. The Nationals bounced back that night in the second game of their doubleheader with the Mets when Ryan Zimmerman hit a walk-off winner and the Nats took two more from NY on Saturday and Sunday to salvage the last four of five games in an 11-game homestand that saw them go 4-7 overall after dropping the first six games to the Dodgers and Pittsburgh Pirates.

Nationals' GM Mike Rizzo was asked by CBSports.com's Jon Heyman for an article this weekend if he thought his team had a run in them like LA put together to climb over four teams and take control of the West. "'We're certainly underachieving in terms of our won-loss record,'" Rizzo told the CBSSports.com reporter, "'I still believe in this team. I still like this team. And I still believe we can win a lot of games.'"

New York Post writer Joel Sherman spoke to an "opposing scout" who said, "Washington is the most obvious team currently with a losing record capable of 'pulling a Dodgers.'" Rizzo told the Post reporter, "'We haven’t had our run yet, and I think we are talented enough to have a Dodger-type run.'"

"We still have a lot of baseball left," the Nats' GM told reporters including MLB.com's Bill Ladson this weekend, "and we’re looking forward to that and like I said, I still like this ballclub. I still believe in it."

"We still have a lot of baseball left," Rizzo said this weekend, "and we’re looking forward to that..." - Mike Rizzo to reporters in D.C. this weekend

"That is why with the trade deadline approaching the Nationals are still in buy mode," the NY Post's Mr. Sherman wrote Monday morning. As he noted, however, and as the Nationals' GM said this weekend, the Nats are only really talking about adding to the bench at this point, because the Nationals still like their lineup and rotation in spite of the fact that they find themselves 8.5 games behind the Atlanta Braves with 56 games remaining on the schedule.

The Nationals are "less than impressed" with the available pitching, FOXSports.com's Ken Rosenthal wrote this morning, and even with Ross Detwiler out for another 3-4 weeks, he said the Nats, "... could continue going with righties Dan Haren and Ross Ohlendorf and turn to righty Nate Karns, if necessary."

Washington doesn't want to part with any of their top pitching prospects like, "... righty A.J. Cole and lefties Robbie Ray and Sammy Solis," Mr. Rosenthal added and they would likely have to if they tried to trade for a starter who could make a difference. 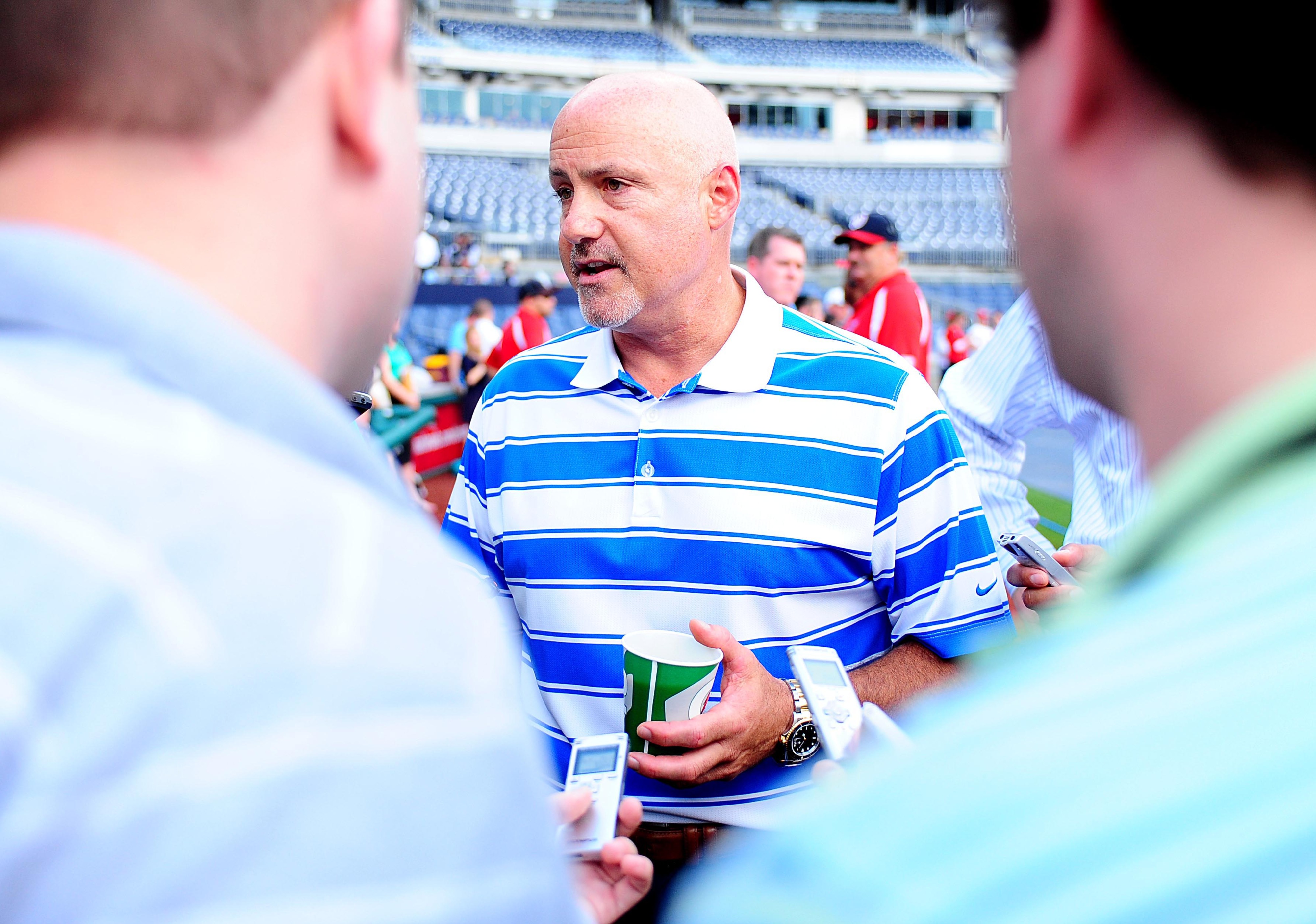 Davey Johnson, after the Nationals won three straight with Ohlendorf, Haren and Taylor Jordan on the mound this weekend, talked about the importance of getting good outings from all his starters and the position it put them in going forward.

"That's huge," Johnson said. "And going into Detroit," with Stephen Strasburg and Gio Gonzalez starting in the two-game set with the Tigers before Jordan Zimmermann, Dan Haren and Taylor Jordan starting in the three-game set in Milwaukee, "... that will line up 1-2-3 going into Atlanta. So, we're right where we need to be."

That doesn't sound like a manager who has given up hope just yet...