"I just felt like there wasn't much room for error," Stephen Strasburg told reporters after the Washington Nationals' 5-1 loss to the Detroit Tigers, so he challenged catcher Alex Avila with a fastball in the sixth and gave up a grand slam that broke up a 1-1 tie.

Share All sharing options for: Nationals' Stephen Strasburg Has No Room For Error In 5-1 Loss To Tigers

With the Washington Nationals up 1-0 after three and half, Stephen Strasburg gave up a one-out walk to Prince Fielder and back-to-back two-out hits by Jhonny Peralta and Andy Dirks which brought the Detroit Tigers' slugger around to tie the game up at 1-1 after four in Comerica Park. Strasburg's 17-pitch fourth inning left him at 54 pitches overall. A 5-pitch, 1-2-3 fifth had him at 59 and still rolling against the AL Central's first-place Tigers even though he was once again receiving little support from his offense.

"I just felt like there wasn't much room for error," Strasburg said after the 5-1 loss, "so I know I had to go right after [Avila]..." - Stephen Strasburg on loss to the Tigers

Fielder singled with one down in the sixth, however, taking an 0-1 curve to left for an opposite field hit. Tigers' DH Victor Martinez took a 1-0 fastball to right in the next at bat for a double that sent Fielder around to third with one out. Jhonny Peralta spit on a full-count curve to take a walk and load the bases, pushing Strasburg up to 69 pitches overall. The Nats' right-hander struck Andy Dirks out for the second out of the inning, but fell behind Alex Avila and gave up a grand slam on a 2-1 fastball knee high inside that ended up six rows back in the right field stands, making it 5-1 Tigers after six in Detroit.

"I just felt like there wasn't much room for error," Strasburg said after what ended up a 5-1 loss, "so I know I had to go right after [Avila] and make him swing the bat and he put a good swing on it."

"He just made that one bad pitch there and [Avila] crushed it but he really, up to that inning, really, he was very pitch efficient..." - Davey Johnson on Stephen Strasburg vs the Tigers

"He just made that one bad pitch there and [Avila] crushed it," Davey Johnson told reporters, "but he really, up to that inning, really, he was very pitch efficient and everything, going right after them. And I was thinking the way he was going he could probably even give me nine innings, but I think he threw about 30 pitches that one inning, so... but that was still a good outing."

Asked what went wrong in the sixth, Strasburg said he still thought he was making good pitches. "I thought I threw a pretty good curveball," he explained, "might have been a little bit up to Prince, stayed inside it pretty well, [he's a] good hitter. The one to [Victor] Martinez, a pitch down and in, it's a ball, he swings and hits it right down the line. Can't really control that. And then Peralta did a good job of taking that curve ball there. I felt like I threw some good pitches in there that didn't get some calls, but that's what you expect when you're on the road."

The right-hander must have also come to expect a lack of run-support at this point. According to ESPN's calculations, after receiving just one run of support in tonight's outing, Strasburg has the lowest average run-support per start in the National League (2.71 RS) and the second-lowest in all of baseball amongst qualified starters behind only the Chicago White Sox' Chris Sale (2.63 RS). "We just haven't been scoring for him," Johnson told reporters, "That's been the problem all year long, we just have not scored for Stras for some reason."

"We just haven't been scoring for him. That's been the problem all year long, we just have not scored for Stras for some reason." - Davey Johnson on lack of run-support for Stras

And Anibal Sanchez has always dominated the Nationals for some reason. Sanchez, 29, improved to (9-1) with a 1.98 ERA in 21 career starts and 131 2/3 IP against Washington in his MLB career with Florida/Miami and now Detroit.

"He's always tough against us," Johnson said, "He started off a little slow and I was hoping we could get to him. But he's tough. He makes pitches when he has to and uses all his pitches, he's always been good against us."

Strasburg was pretty good tonight too until the Tigers finally got to him in the sixth. "It's a tough situation," the Nats' 70-year-old skipper said, "I mean, he gave the two down the line doubles with the runner on. Those were tough blows to try to pitch out of that. But if he makes a pitch [to Avila] and gets out of [the sixth]... a heck of a ballgame." 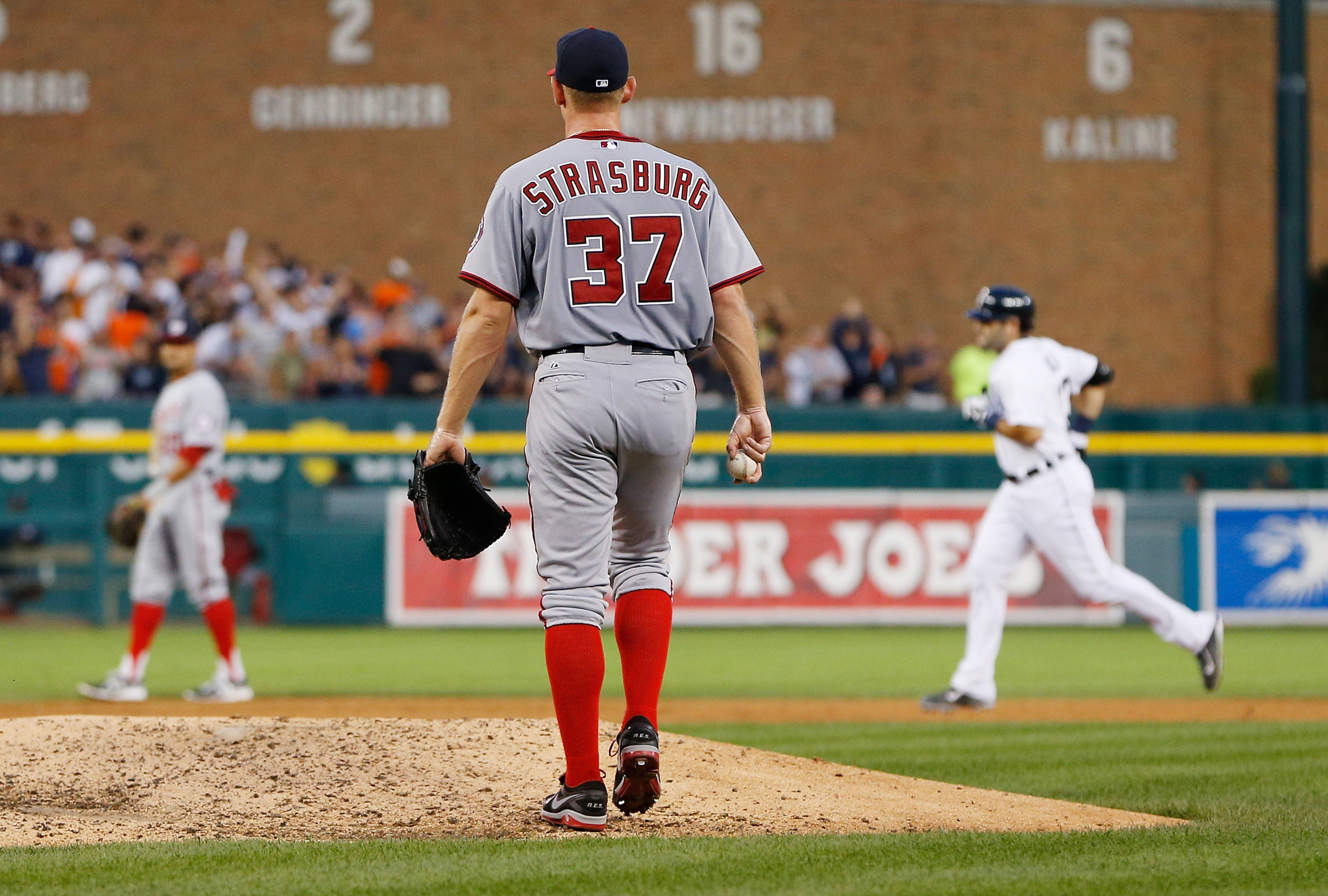 "You've got Cabrera and Fielder hitting three-four with Torii Hunter in the two-spot," Strasburg said, breaking down the Tigers' lineup, "I mean, that's pretty stacked in the middle. So I felt like I handled those guys really well and just... just one pitch." One pitch he'd like back and another loss for the Nationals, who dropped 10 games back in the NL East as the Atlanta Braves beat the Colorado Rockies 11-3 in Turner Field.

Strasburg was asked if it felt like the team was running out of time? "I pitch once every five days," the right-hander said, "I give it everything I have on the day I pitch, and if it doesn't turn out the way you hope, then try to do your best to learn from it and get them the next time."