Justin Verlander hasn't had as much success this season as he has in the past. Some bad luck and some apparent skill degradation are to thank, but his track record is too good to ignore. This PDB uses images to tell the story of Verlander's 2013.

Share All sharing options for: The Tigers' Justin Verlander's Issues, In Images

The Nationals face off against the AL Central-leading Detroit Tigers and Justin Verlander tonight at Comerica Park. Instead of the usual 1,000+ word babble, this PDB relies on a variety of images -- with minimal filler -- to highlight trouble spots for the Virginia-born righty this year. 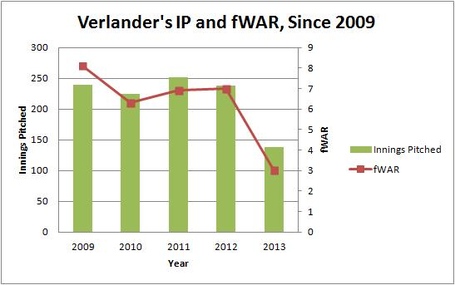 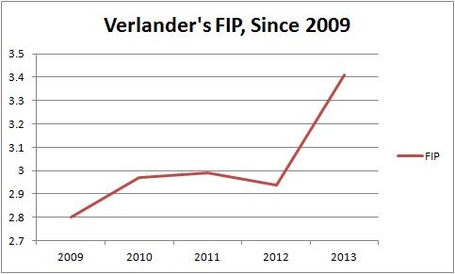 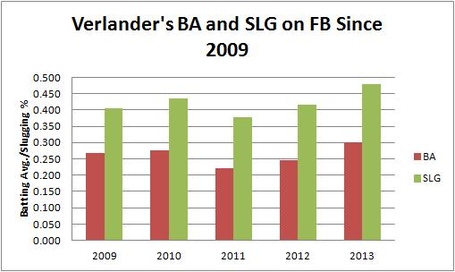 ...maybe because his lateral movement is more flat:

[June 1, 2013] Justin Verlander hasn't been his dominant self this season, but in an interview Monday with ESPN Radio, the Detroit Tigers' ace thinks he has identified a problem with his mechanics and hopes fixing it will return him to past form...

By watching video from past starts and comparing them to starts this season, Verlander said he was able to identify a problem with his shoulder angle during his delivery.

"I think that led to me being too inconsistent trying to deliver the ball, especially with my fastball command, and that's kind of the root of all my problems this year," he said.

By True Average (the more red, the worse for the pitcher): 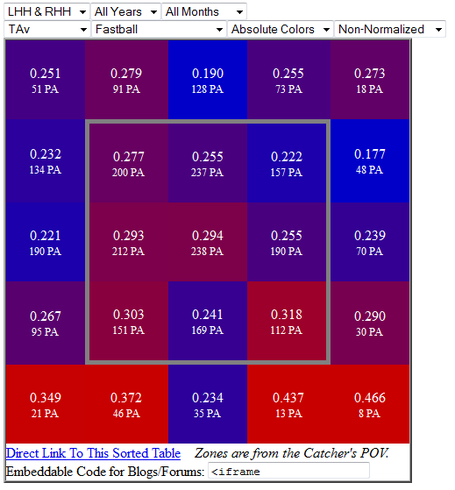 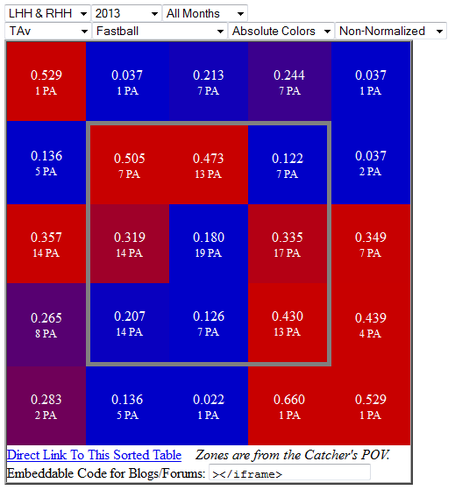 Doubtless that Verlander has been one of the best pitchers in baseball over the last half-decade. But this season, he's seeing his fastball usage, velocity, horizontal movement, and whiff rate decline and his line drives and BABIP on the pitch increase from more successful times. After identifying a mechanical issue in his delivery, he's still seeing a relatively inconsistent movement profile. His results have similarly been worse across several measurements.

Verlander still has the ability to shut teams down; since early June, in fact, he's thrown seven innings of shutout ball twice. The Nats are sure to be tested this evening, and success against the fastball could portend good results.

Thanks to Baseball-Reference, Baseball Prospectus, Brooks Baseball, and Fangraphs for data.