Add Nationals' Outfielder Bryce Harper To The List Of Believers...

Washington Nationals' outfielder Bryce Harper spoke out after today's loss to the Detroit Tigers, asking for accountability and echoing his GM and manager's belief that this team is better than they've played so far in the 2013 season. So why aren't they playing like it?

The nation's capital is now at the blaming headline-grabbing quotes stage, rethinking the last year's worth of deals, moves and decisions and searching for ways to explain what's gone wrong. Davey Johnson was asked for the umpteenth time this afternoon, before the Washington Nationals' 11-1 loss to the Detroit Tigers, if he regretted making his "World Series or Bust!" comment about the 2013 Nats last winter.

"I don't regret saying, 'World Series or Bust!'" Johnson said, "because... it's looking more like 'Bust.' But this is my last go-round anyway, so..." - Davey Johnson

"I don't regret saying, 'World Series or Bust!'" Johnson told reporters, "because it's looking more like 'Bust.' But this is my last go-round anyway, so... but what I want to do is what's best for this organization. I want this organization to continue being a first-division ballclub. And the Lerner family has done that. [Mike] Rizzo has done that. We're just not holding up our end on the field. And they're going to run me out of here anyway, so...but I'm still optimistic with this team."

On his weekly radio show on 106.7 the FAN in D.C., the Nationals' GM was asked by hosts Holden Kushner and Danny Rouhier if he could have handled the Drew Storen/Rafael Soriano situation any differently with Tyler Clippard's recent comments about the effect it had and the fact that the deal "hit Twitter' before Storen learned of the signing of another closer mentioned as examples of how it may have been mishandled.

Mike Rizzo on how the #Nats handled Storen this year, including signing Soriano: "I thought we handled it perfectly." http://t.co/wyWlc4EzoO

"Well, we certainly could have explained things to him earlier as the process was going on," Rizzo said, "but the Soriano process kind of took [on] a life of its own if you will, and got to an accelerated point where it happened quickly and that type of thing. Steve McCatty had talked to them actually before it was announced, publicly announced. And got with [Clippard] and with Drew about it..."

"Hey, this is all about improving the ballclub," Rizzo continue. "This move wasn't to slight Drew Storen or Tyler Clippard. It was to bring in another quality back-end reliever to make us that much stronger. And the move, I thought was a good move at the time and because of the way that the contract was structured it worked for us and we felt good about the acquisition and if that wasn't the way that Drew wanted to go... this is Major League Baseball. My job is to put the best 25 men out there possible that I believe works and I thought and I still think that this was a good move towards us playing meaningful games at the end of the season."

"I think if mishandling the situation means getting an established closer that had 42 saves in New York City, then we mishandled it." - Mike Rizzo on 106.7 the FAN in D.C.

Rizzo went on to say that he disagreed with Clippard's assessment of how that organization mishandled the "Soriano situation."

"I thought we handled it perfectly," he said. "I think if mishandling the situation means getting an established closer that had 42 saves in New York City, then we mishandled it. But I don't think that's mishandling it. I think that's strengthening a strength and getting the best 25 men possible to play on the big league club. And that's where I think the assessment was in error."

In spite of the Nationals' manager and GM's confidence in the talent they assembled, however, the Nats found themselves four games under .500 after today's 11-1 loss to the Detroit Tigers. The Nationals are 10.5 games out of first in the NL East behind an Atlanta Braves team that's won five straight to improve to 62-45. The fact that the three teams ahead of the Nationals in the Wild Card standings have gone 4-6 in their last 10 might be encouraging if the Nats hadn't gone 4-6 as well. Today in Comerica Park it was Gio Gonzalez who blew up, giving up 11 hits and 10 runs in 3 1/3 IP before he was pulled from the mound.

"'This [expletive deleted] ain't over. I really don't think it's over...'" - Bryce Harper to reporters after loss to Tigers

"Bryce is going to be all right," the manager said, "He had a little spasm in his hip area, probably from being in the field too much. But I think he's going to be all right." Ross Ohlendorf lasted just 11 pitches as well, leaving the game when his velocity was off and he appeared uncomfortable after relieving Gonzalez. "It was weird," the Nats' skipper said. "His fastball was 84 [mph] and he said he was just 'stiff.' And I said, 'We can't take a chance on that.' So, he wanted to pitch, but no possibility."

Johnson was sure his right-hander would be all right. As for his left-handed starter, Johnson said, "He didn't have a feel for his curve ball and any time a good-hitting ballclub, or any club, if you're 2-0, you're going to get hit and that's what it was. He couldn't get ahead. I said, 'Gio, I don't care what you throw over, throw anything you can throw over for a strike and get ahead.' But that was his problem, I don't think he had a feel for the curve ball and this ballpark and these guys, they're going to kill you. So it got ugly quick." 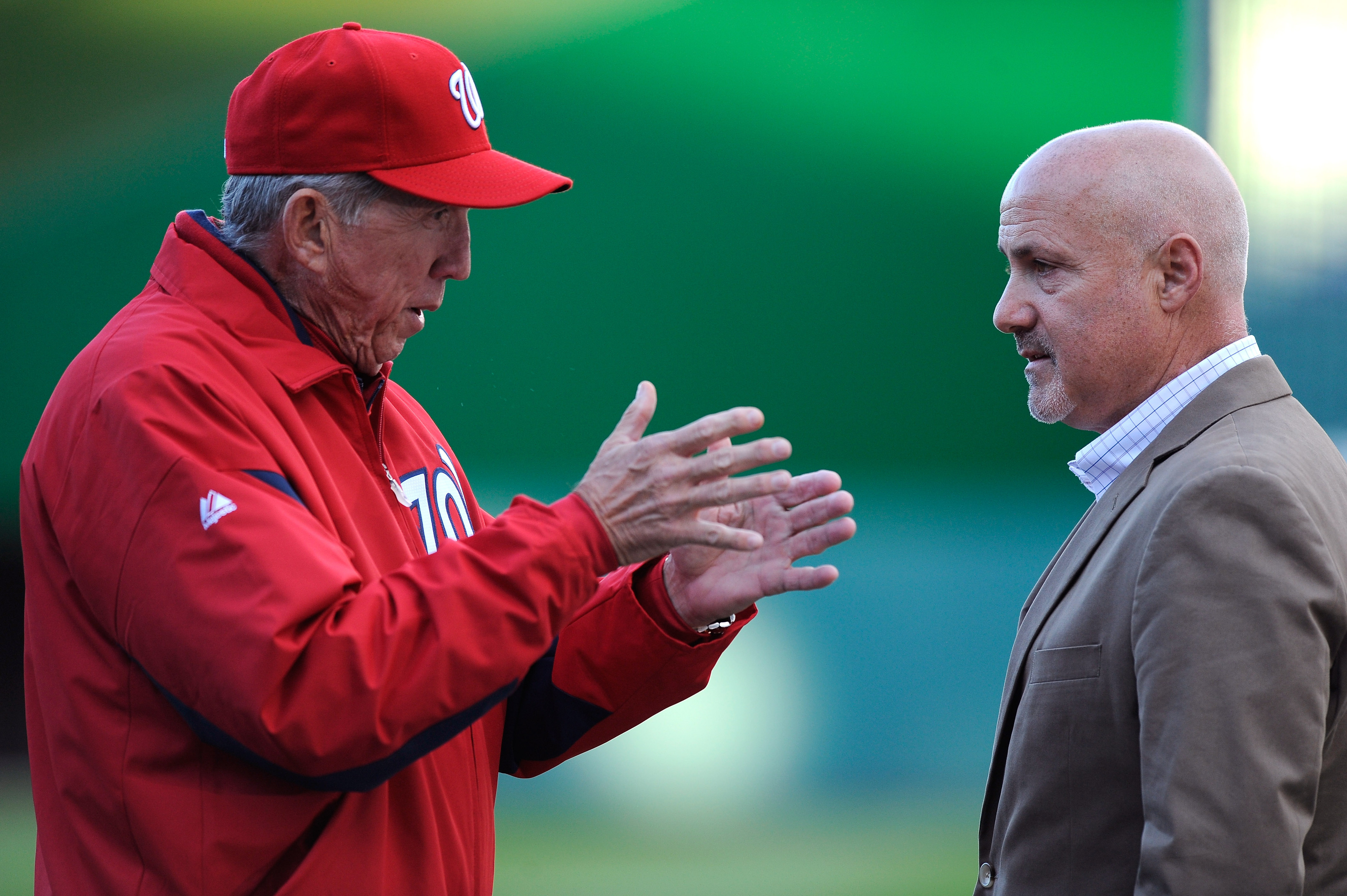 Bryce Harper told reporters, including CSNWashington.com's Mark Zuckerman that the Nationals had to continue to play with heart. "'You've got to play as a family,'" the 20-year-old slugger said, "'and everybody's got to want it, starting with the manager on down to everybody.'" Noting that the Nationals still had nine games with the Braves, Harper added, "'This [expletive deleted] ain't over. I really don't think it's over. So we've just got to keep going, keep grinding and turn into the family that we were last year.'"

Harper, like his manager, thinks the team is better than their record says they are. As Johnson said this afternoon, however, he doesn't think a lack of effort can be blamed.

The Nationals didn't add or subtract at the trade deadline, and the Nats' skipper reiterated after the loss that he still believes in his team. "I like my ballclub," Johnson said. "We have the talent, we just have to start expressing it."