Andrew Cashner's time in San Diego's rotation this year has been a reasonable success, even though the Padres have a record below .500. Like certain members of Washington's rotation, Cashner has adjusted his approach to work deeper into games -- but it's hard to know for certain whether it's helping.

The Washington Nationals get back in action against the San Diego Padres tonight at Nationals Park. Taking the hill for San Diego is Andrew Cashner, a one-time starter-turned-reliever whom the Padres moved back to starter full time earlier this year. The right-handed has made thirteen starts this year, and his pitching evolution may sound like that of some of the Nationals' starters.

Cashner was taken with the 19th pick of the 2008 draft by the Chicago Cubs. The TCU product was fairly well-regarded, ranking as the Cubs' third best prospect after 2008, and their fourth best prospect after 2009. Baseball America saw his slider as the best in the organization both years, and his fastball wasn't too bad, either.

But the Cubs placed Cashner in the bullpen in 2010, where over 53 appearances he earned a 5.03 FIP, built on the back of a high HR/FB and walk rate.

Asked about Cashner in a chat in mid-2010, ESPN's Keith Law stated that

Two reasons I had him more likely to be in the pen were lack of missed bats in pro ball and bad track record prior to his draft year as a starter, with some medical concerns. If he's healthy, and continues missing bats (small sample size caveat applies), then yes, he'd project as a starter and would have two plus pitches in that role.

Law predicted Cashner's medical issues with solid prescience. In early 2011, the 6'6 hurler strained his rotator cuff, and suffered setbacks while recovering. On January 6, 2012, the Cubs traded Cashner to San Diego for Anthony Rizzo (other players were also involved in the deal).

Cashner mostly worked out of the pen last year, pitching to 3.55 FIP with a blazing 98 MPH fastball and a good change up. This season, the Friars returned him to first-inning-and-on duty. The results have been average by ML standards, but encouraging for him: a 3.66 FIP and nearly a one-win fWAR season so far.

As you'd expect, Cashner has dialed back his fastball velocity this season. He's also seen better results. Last year, batters hit .247 while slugging .454 against the pitch. He's cut those numbers down significantly in 2013 -- especially in the slugging department -- to just .218 and .331.

Make no mistake about it, 95 MPH is still bringing the hot, stinky cheddar. Indeed, Cashner's fastball ranks 6th fastest in the majors this season, behind some other PDB'ed pitchers: Matt Harvey, Jeff Samardzija, and Wily Peralta (Stephen Strasburg is first, and Jordan Zimmermann is 7th).

Check out what Cashner had to say to MLB.com's Corey Brock in late May about his overall approach this year in comparison to last:

The point, Brock stated, was to "allow[] Cashner to get more contact earlier in counts instead of just trying to blow the ball by hitters, which can run up a pitch count quickly. So it's not necessarily about saving bullets, but more about being smarter with them."

But pitching smarter hasn't meant just pumping fastballs in there; instead, he's mixed his 2013 repertoire up (below) versus 2012. 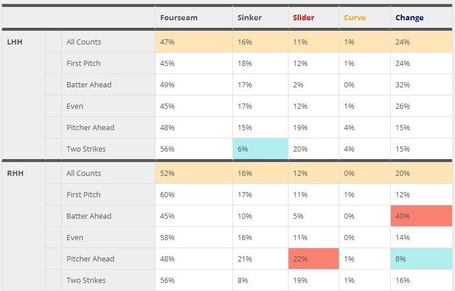 The first thing you're likely to notice is Cashner's fantastically low line drive rate. In fact, it's the second lowest rate in the bigs according to Fangraphs (you'll recognize #1 on that list). He's also getting a ton of ground balls, which help to limit runs.

While his BABIP is low, xBABIP projects that Cashner should be giving up hits on batted balls just 27.9% of the time, a mark that is just about spot on with his current performance.

So, what are commentators saying about him this year? Karl de Vries of The Hardball Times summarized in June that

[t]he big question, of course, is where the strikeouts have gone: FanGraphs’ Chris Cwik (and others) have noticed a drop in velocity on his hard slider, which could be a byproduct of him being stretched out in the rotation. Regardless, he’s not the strikeout machine I’d hoped for, so while he’s mostly lived up to my expectations as a great upside guy, he’s yet to fully deliver on his strong potential.

Cashner's K% is down to 16.6% from 26.5% last season, but he's also done a better job of limiting walks (6.2%). Even the walks aren't without concern, though, as Mike Podhorzer pointed out a few weeks ago ("But if you dig deeper, you realize his F-Strike% [first-strike percentage] is the exact same it has always been, so you have to wonder what’s behind the apparent control improvement."). Indeed, his overall strike percentage (63%) is equal to the major league average.

Aside from the self-confessed change in approach and presumably resultant above-average percentage of balls in play this season, there's just the lack of line drives to explain why Cashner's been about league average FIP-wise.

But even that explanation has some holes.

The two charts below represent Cashner's line drive rate. The first, from Fangraphs, is the value listed above. The second is from Brooks Baseball, and is done on a per-pitch basis. According to Brooks Baseball, none of Cashner's offerings check in at a line drive percentage equal to or below 17.5%, whereas Fangraphs had Cashner at roughly 16% overall.

Here's Fangraphs tale of the matter (the red, bottom line): 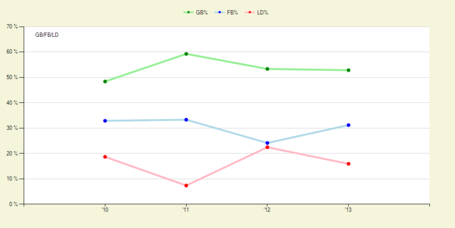 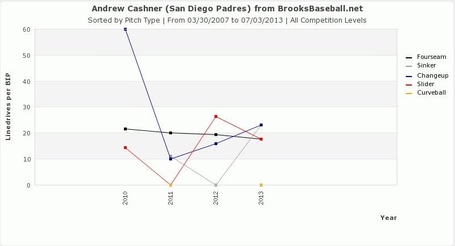 Just to add to the fun, Baseball Reference has him at 18%. Brooks looks to be closer to 20.x%.

Anyway, it doesn't surprise me that there's a difference between how the leading websites classify data, but the 4% increase takes Cashner from second in the league in LD% to the middle of the pack.

The consequence? It weakens an argument that supports his modestly successful performance as a starter so far, because it increases the chances that he's not getting the sort of weak contact (on account of the increased line drives) you'd want to see in the absence of strikeouts.

Cashner still throws hard, but isn't as much a threat to strike batters out as he once was (unfortunately, I said the same about Peralta). And reasonable concern is, I think, justified about whether his walk rate will remain low. Further support for this is found in his low O-Swing%.

Finally, although his approach is geared towards going deeper into games -- and he's done well to do so, particularly considering his injury history -- it's unclear whether he's locating pitches to induce weak contact that would support such a low BABIP (and therefore a reasonable conclusion that he was due for some level of regression there).

Yet, with the Nats offense this season, who really knows.

Big thanks to Baseball Reference, Brooks Baseball, and Fangraphs for data.