Cole Hamels has just three wins and eleven loses so far this year. But don't be fooled, because this is largely the same hurler who has earned four strikeouts for every walk and a .626 OPS against the Nats for his career.

The Philadelphia Phillies send Cole Hamels to the mound to face the Washington Nationals this evening in the City of Brotherly Love. There have been plenty of articles about what is wrong with Hamels this year, mostly because people still look to win-loss record to indicate whether a hurler is "right" or otherwise.

But making a judgment about Hamels' beat-ability based on win-loss record would be a mistake.The fact is, he is pitching generally as well as he always has.

Hamels was drafted out of Rancho Bernardo High School in California by the Phillies. The 17th pick, John Sickels recently wrote in a "Prospect Retrospective," had injury concerns early in his career. Sickels continued to state that "I gave him a Grade B+ entering 2006, writing that 'if his body holds up, he has every chance to be a fine, fine pitcher,' but that I wasn't sure if his body would actually do that."

Hamels has realized the potential that Sickels noted and that the Phillies saw, as many readers are likely aware. By way of brief summary, here are some notable career accomplishments:

You'll see his recent career WAR table to the right. His best season, 2011, was fueled by two career-low marks: a 5.2% walk rate and .255 BABIP, the latter built on the strength of a ground ball rate greater than 50%. It was a pretty dominant campaign.

This year, his 3-11 record -- I hesitate to even mention it, really -- belies Hamels' performance. Why? Several of his core (FIP, xFIP) and component (K%, BB%) metrics indicate that Hamels is who we thought he was (brief language). His FIP (3.65), for example, is just slightly higher than his career 3.59 mark. His strikeout and walk percentages are also above average relative to the league, although each are slightly below his career stats. The Nats will have a tough assignment.

Hamels works with a four seam fastball, sinker, change up (an incredible offering), curve and cutter. His pitch usage has, according to Brooks Baseball, remained largely the same as it was in 2011 and 2012.

There's some interesting information here. The aforementioned change up is, on a value basis, the best in the major leagues. It's also consistently been his best pitch throughout his career.

On the flip side, Hamels' fastball has been the worst in the bigs this season by value. Numbers back this up, as you see below. 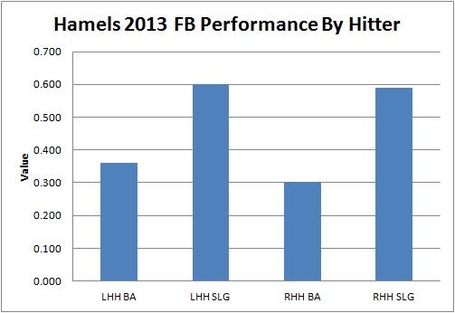 The movement on Hamels' pitches is mostly the same this year as it has been the past two years. His horizontal release point appears to be slightly more sidearm, but that goes for all of his pitches. The fastball is simply getting hit harder than it ever has, while the change is seeing results that are equally as extreme, except on the other end of the spectrum.

I've placed Hamels' career batted ball profile below his current 2013 numbers. Most everything here is similar, too, except for his BABIP and left on base percentage.

Hamels is actually performing 7% better than league average with runners on base, and has a .291 BABIP in this case. But put runners in scoring position, and Hamels has seen an sOPS+ of 110 (100 is average, and higher is worse) and .304 BABIP. And with no runners on, he's seen a sOPS+ of 118 and a .322 BABIP. Trading some ground balls for line drives doesn't help, but the Californian has weathered those issues recently.

On May 20 of this year, Matt Swartz of Fangraphs penned a great article on what Hamels was, at the time, doing differently this season. In short, he determined that Hamels was seeing swing results on the change that were similar to his career numbers, but was throwing the pitch in the strike zone less often. As a consequence, Hamels was behind more batters, where lefties saw 50% fastballs, and righties saw 46% heat.

[t]his leaves open the question of whether Hamels can actually change that and throw more changeups for strikes. It may be that his talent has deteriorated such that he can’t locate his changeup as well, but more likely, this is a temporary issue. Hamels knows that falling behind hitters isn’t working, and his track record suggests that he is capable of throwing the pitch for strikes. If he can get back to throwing the change-up in the zone with more frequency, hitters will chase more often when he buries it out of the zone, and he should get back to being the dominating left-hander he’s been for most of his career.

Hamels' zone% is still down, but his overall strike% has increased substantially. Take a bigger step back, and you'll see that since May 20, Hamels has pitched to a 2.40 FIP - a pretty dominating stretch for the southpaw.

I'll wrap with a few images to help explain why Hamels' change up is so tough for hitters. First, let's start with the ball coming out of his hand. You'll see his release point with the change up this year almost entirely overlays his "hard" release point offerings: 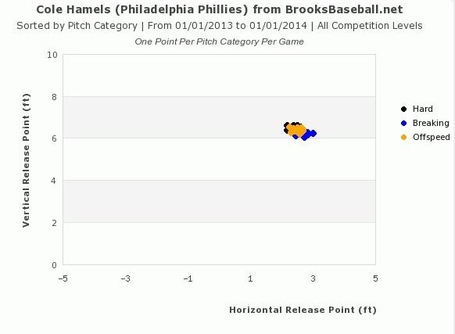 Now, check out how the pitch breaks from the side, with the plate on the left side of the graphic. You'll see the change (the purple square) begins to drop off the table over half-way to the plate, when batters have often already decided what pitch it is they are seeing. Importantly, the fastball (red square) is vertically separated from his change at this point by just two or three inches.

Finally, here is how the change up looks from above. Notice how the pitch is largely identical in horizontal location to the four seam up until less than 25 feet from the plate, where it begins to break sharply away from righties and in toward lefties.

Hamels' arm action is also very close to his fastball. This change up .gif gives you an idea of how the whole process looks:

In sum, it's really difficult for batters to distinguish Hamels' offspeed from his heat, and this makes it difficult to hit.

Hamels isn't an 11 loss pitcher. Because he's really the same guy he's always been -- in fact, considering his recent run, he may be pitching even better than his "average" -- the Nationals aren't facing a "fake tough" assignment this evening (h/t Reddington). But Hamels has shown this year that he is prone to control issues with the change up. If that problem re-surfaces, Washington would be well-positioned.

I think pitch recognition will be important this evening. So, watch for quality takes or well-timed swings to assess whether the Nats are able to hit Hamels' fastball and limit the effectiveness of his change.

Thanks to Baseball Reference, Brooks Baseball, Fangraphs, and Texas Leaguers for statistics and information.