Tim Lincecum's early career dominance is well known, as was his 2012 performance slide. This PDB looks at Lincecum's primary offerings -- fastball, sinker, and change -- and compares the righty's 2009, 2012, and 2013 using prior performance assessments.

Share All sharing options for: Understanding The Giants' Tim Lincecum's Highs and Lows

In 2012, the San Francisco Giants' Tim Lincecum -- he of the back-to-back Cy Young awards in 2008 and 2009 -- suffered through what was his worst professional season to date.  His 4.18 FIP and +0.9 fWAR/ -1.7(!) bWAR reinforced the view that something more than regression was up, but theories were abound, as Kyle Boddy at The Hardball Times cataloged.  Some, like Dave Cameron, pointed out that

Saying that Tim Lincecum has been unlucky [in 2012] is probably not true. He’s struggling with his command, falling behind in counts more often, and throwing pitches that are rightfully getting crushed based on movement and location.

Boddy himself noted that Lincecum's delivery was a bit off-kilter, as the Washington native had increased "trunk-tilt" in 2012 when compared to 2009.  He demonstrated this with the following image:

Boddy noticed that Lincecum's 2012 trunk rotation was accompanied by a slightly higher release point on his pitches across the board.  He concluded,

[m]y hypothesis is that Lincecum is focusing a lot on rotational momentum around the upper trunk and trying to leverage the muscles in the back (latissimus dorsi, mainly) to produce velocity, but has lost his "line to the plate." Movement is being wasted and improperly sequenced, possibly as a result of reduced lean body mass, loss of stability in the shoulder, or just altered mechanics for whatever reason.

This season, Lincecum's results have been better, if not quite up to the rare air of 2008 and 2009.  He is currently pitching to a 3.49 FIP -- a tick better than league average -- and is striking out about his average number of hitters (25%) and walking fewer than his career average (8.9%).

Lincecum primarily relies on a fastball/sinker combo and change up when facing batters, per Brooks (excepting the change, which Brooks appears to label a split; it's possible he's throwing both of these, too).  Here is his strike rate for each pitch during the corresponding year, again per Brooks:

You can see how Lincecum is throwing fewer fastballs for strikes this year than he did last, and all values are down since 2009.  But the Freak has seen an upswing in his sinker and change up strike rates from last year.

Here's the same graph by batting average and slugging percentage.

As salient as Cameron's point on Lincecum's fastball was last year, it may be even more so this year.  This is apparent when you see Lincecum's PitchF/X card; the below measures 2012 and 2013 True Average against the former Husky's heater.  Clicking will switch between each year for a more easy comparison. 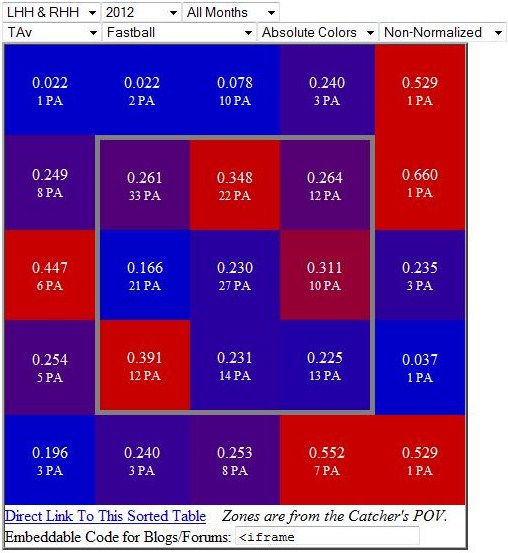 2013 is like looking at a daggone stop sign.  So how is Lincecum achieving better overall results this year, when his fastball and sinker are much worse?  I don't really know.

One possible explanation is that he is throwing his hard stuff less frequently overall:

Another reason may be that his change up has reclaimed some of its value.  Chris Cwik of Fangraphs wrote on July 15 that Lincecum's change up was back, in part because his ball percentage (insert laughter) was significantly better.

Side note - Cwik stated that he obtained his data from Brooks, but Brooks does not list Lincecum as throwing a change up.  It is possible Brooks changed its data after it transitioned to a new format, but I am not sure of this.  I couldn't replicate Cwik's data using Brooks, but the "split" pitch classification tracks much of his work close enough.

As the average/slugging graph table shows above, Lincecum's change up is seeing better results.  I would venture this is in some part attributable to him being able to control and command the pitch better.  To be sure, this isn't all that novel, as that was Cwik's primary conclusion.

But some commenters on Cwik's article wanted to know why the change up was better.  With the continual caveat that I haven't seen him in person and am not a scout, I think the possible explanation of a consistent release point is somewhat inconclusive.

Here are Lincecum's release points on the change/split in 2012, one point per game: 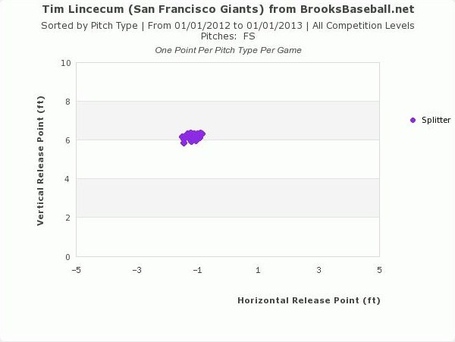 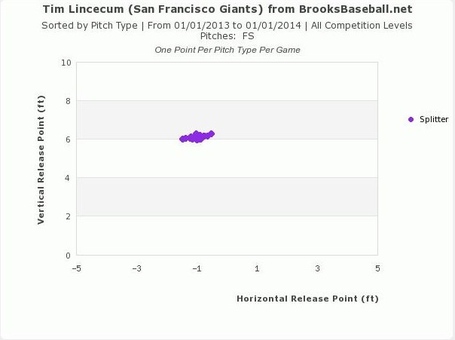 It may be that because of the pitch's typical downward movement a consistent vertical release point on a change up is more desirable.  This season, Lincecum is getting the 10th least vertical movement at just 1.8 inches (that is to say, sinking effect) with his change, so his change up trajectory is more reliable, and he's able to move the pitch to either side of the plate.

Of course, he had a +1.3 inch value last year (more smirking), but with an inconsistent vertical release point and half a foot more drop, it's possible that such a combination can be too much to overcome.

So, if you're looking for something, I suppose a reasonable case could be made that supports his improvement with the change and, concurrently, overall performance improvement from 2012.

For the Nationals, Lincecum remains a opponent with a below-average hard offerings and a really good change up.  Like Adam LaRoche showed last night, mistake fastballs can be hit a long way.  Lefties will see more sinkers than heaters, but if the Nats can get ahead in counts, they'll work to Lincecum's weakness.  And then -- with a little luck -- it will be 7.