Davey Johnson On Stephen Strasburg's HBP On Justin Upton And Ejection: "I Would Rather We Had A Different Approach To That."

Before Saturday night's game, Davey Johnson said that he would never order a pitcher to hit an opposing batter, but Washington Nationals' right-hander Stephen Strasburg did respond the the wave or recent HBPs on Nats' slugger Bryce Harper.

Share All sharing options for: Davey Johnson On Stephen Strasburg's HBP On Justin Upton And Ejection: "I Would Rather We Had A Different Approach To That."

Davey Johnson talked about the goings-on last night in Atlanta before today's game on this morning's edition of the "Manager's Show" with Washington Nationals play-by-play man Charlie Slowes. After Stephen Strasburg hit Justin Upton last night in the bottom of the first, he came out for the bottom of the second with a 4-1 lead after a long top of the inning and had no control.

"I think he was trying to go inside. And he just threw one behind him. And I think the umpire thought the same thing and then the next one behind him too and [Hudson] can't let that happen." - Randy Knorr on Strasburg's ejection

Strasburg walked Jordan Schafer on four pitches then missed with three straight to Andrelton Simmons, with the second and third going behind the Braves' shortstop, earning an automatic ejection he didn't contest since warnings had been issued after the first hit by pitch on Upton.

Johnson was tossed as well, because of the warnings, and he and Strasburg could face fines and suspension.

Johnson and Mr. Slowes discussed the Nationals' 25-year-old right-hander's intentional and "unintentional" offerings. The Nats' skipper said he didn't exactly like the way the HBP on Upton was handled and wasn't sure what went on in the second inning.

"Steve's still learning about how to handle situations like that," Johnson told Mr. Slowes, "and any time you hit somebody after you give up a home run it's very obvious you're going to be under a warning and I would rather we had a different approach to that. But he's still very young in handling those situations and he didn't do a really good job, you know, getting us both thrown. But he's learning. This is all a learning process for him."

"Any time you hit somebody after you give up a home run it's very obvious you're going to be under a warning..." - Davey Johnson on Stephen Strasburg hitting Justin Upton

Davey Johnson said last night that the first thing he did when got into the clubhouse was ask Strasburg if he was okay after the way he had struggled with his command. The Nationals' manager didn't seem to think Strasburg was trying to hit Simmons in the second and he didn't sound 100% convinced even Sunday morning that something hadn't been wrong with the pitcher, or perhaps he was laying the groundwork for a defense to keep his right-hander from getting suspended.

"It might have been the case," Johnson explained when Mr. Slowes said he was happy that it didn't seem to be an injury issue. "Because I went out there and told the umpire, 'He walked the first hitter, didn't come close to a strike. And then he threw a curve ball that missed by about six feet and then he threw two behind the hitter. You can't say he was trying to hit somebody. I think his command is... I think he's not even healthy. And I think that's a bad decision.' And he said, 'Well, I can't help it, you're both gone.' And I said, 'Well, it's obvious to me he's got good command. I don't think he's ever thrown but one wild pitch all year and here he throws three to one hitter.'" 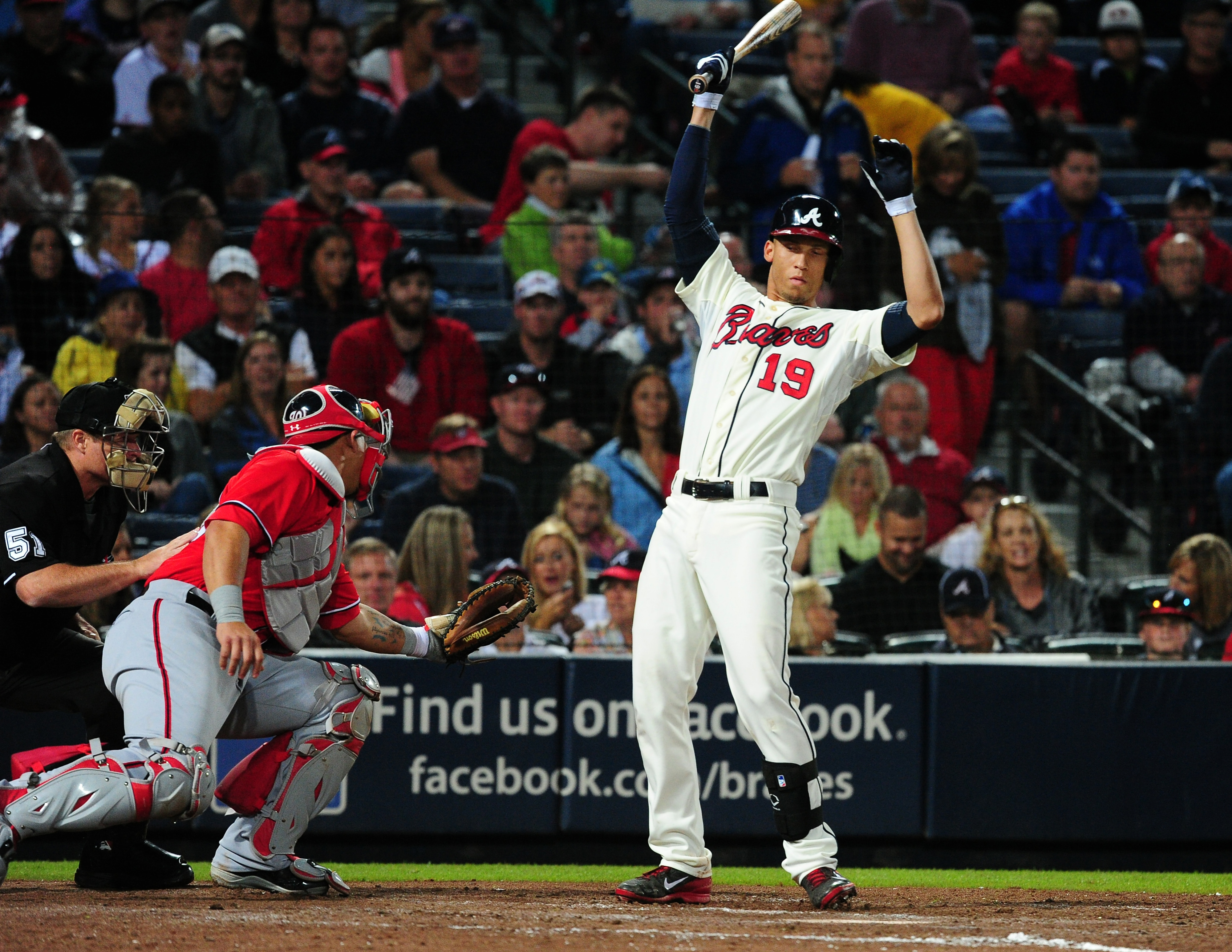 Strasburg said the long top of the second left him uncomfortable and unable to regain his command, but he told his manager afterwards there was nothing wrong physically. "When we both got ejected I checked with him and he's healthy," Johnson said this afternoon, "and there's nothing wrong and he should be good for his next start."