Chris Rusin is a 26-year-old southpaw who pitches for the rebuilding Chicago Cubs. He has started 13 games in his major league career, without a tremendous amount of fanfare. Expect the Nationals to see some hittable pitches tonight.

Share All sharing options for: The Chicago Cubs' Chris Rusin. Who? Chris Rusin!

One of the more memorable ad campaigns by the Washington Nationals' public relations team was 2009's "Defining Moment" series. You may remember those, but possibly for the wrong reasons; as Dan Steinberg said, "One problem with the campaign, of course, is that there have been relatively few 'defining moments' for both of these franchises in the recent past, or at least, moments whose definition isn't 'take two Prozacs and call me in the morning.'"

A highlight of the effort was George's recollection of Nats' backup catcher Wil Nieves's walk-off home run against none other than the Chicago Cubs in 2008. Prior to that time, Nieves had never hit a home run in the bigs. In fact, until this year (!), he hadn't posted an OPS+ greater than 92 over a single season. So, George knew his audience might have some trouble identifying the protagonist: "Who comes up? Wil Nieves. Who? Wil Nieves!"

It's been the commercial that keeps on giving, even on these very pages. Which brings us to the opposing starter this evening, Chris Rusin.

Rusin has never appeared on Baseball America's top prospect lists, although the publication did grade his change up and control as the best in the Cubs' system after 2010. The lefty made his major league debut last season, where over 29 2/3 innings he put up a 6.37 ERA and 1.65 WHIP.

Over 32 innings this year, he's seen better results. For example, although he strikes out a below-average number of hitters, his strikeout to walk ratio is an agreeable 2.1, and he's already accumulated +0.7 bWAR. The 26-year-old works primarily with a sinker (35.6%), cutter (27%), and four seam fastball (17.6%). As manager Dale Sveum said after Rusin threw six shutout innings against the Cardinals earlier this month, "'[h]is ball can move so much that he can get swings and misses at some balls that are quite a ways out of the zone....But he makes the ball move. He keeps the ball down.'"

If you hadn't guessed from Sveum's statements, Rusin won't often overpower other hitters -- he tops out at a little over 88 MPH on the four seam fastball and sinker. Probably related to his lack of velocity with the fastball is his current 23.5% line drive rate on balls in play with the pitch, which is supporting a .263 BA/.579 SLG line against. 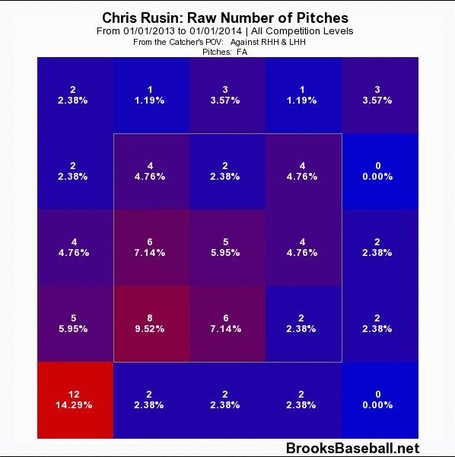 You can see above that Rusin's fastball location is pretty good; he's just getting hit on those relatively infrequent occasions when he leaves the pitch over the middle.

Interestingly, Rusin's line drive rate on his cutter (33%) is higher than for his four seam, but his results (.200 BA/.200 SLG) are appreciably better. Either the high line drive rate or the favorable results may soon give here.

Rusin's batting average on balls in play accounts for a large part of the difference between his 2012 and 2013 performance. Last season, the University of Kentucky product saw a .354 mark on contact in play. That's 99 points higher than his .255 value this season.  He's knocked his line drive rate down by three percent, which has helped, but his xBABIP (.293) remains significantly higher that what he's presently doing.

To the cutter and BABIP flags one could add an inconsistent movement profile. Although Rusin shows a pretty consistent release point across his pitches, his pitch movement is a little more USPS than taxes: 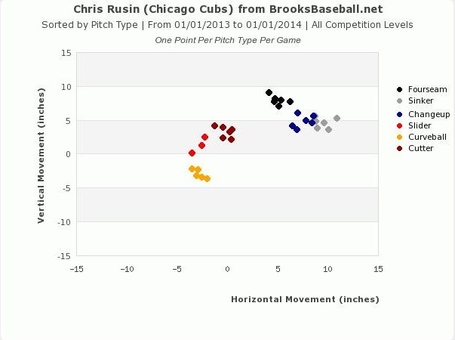 I'm not sure it's a big problem this early in his career, although it seems reasonable to think that a guy who can't throw very hard would need to demonstrate strong command and control to succeed. And inconsistent movement leads to neither, all the usual caveats aside.

Even if Rusin is seeing some issues, it's not like he's alone (see Zimmermann, Jordan's performance last night).  There are some partial explanations for his good performance, too. For example, the Cubs -- for all their flaws -- are actually playing some pretty good defense this year. While I wouldn't bet that it's good enough to depress Rusin's BABIP by 40 points, it's something.

"I’m not as nervous as I was [last year]. It goes away [more] each outing...This year, it’s a lot more free and easy. I’m not tensing up or anything. In big situations, I’m able to calm myself and really make my pitch."

Rusin is a organizationally developed lefty arm who projects as a back of the rotation starter; there are certainly worse things. Indeed, these are positive signs for the rebuilding club on Chicago's North Side. Perhaps against the 2012 Nationals, the young lefty would be over his head. But since Washington has the second-worst wRC+ against southpaws in the majors this year (performing 24% worse than the average team), there may be more positive signs for the opposition on the horizon.