Lucas Giolito, the Washington Nationals' 2012 1st Round pick, made his NY/Penn League on Wednesday afternoon with five scoreless innings of work for the Auburn Doubledays. Doubledays beat writer Jeremy Houghtaling was on the scene to see Giolito.

BATAVIA, NY: It was a change of scenery, but the same results for Lucas Giolito on Wednesday night.

The Washington Nationals' 16th overall pick in 2012, called up from the Gulf Coast League on Monday, tossed five shutout innings to register the win in his debut with the Auburn Doubledays of the New York-Penn League.

"It feels unbelievable to be able to pitch in front of a crowd in a stadium, it's something I haven't done for a really, really long time..." - Lucas Giolito on NY/Penn League debut

The 6-6 right-hander allowed two hits and struck out four, as Auburn cruised to a 7-0 win in the first game of a doubleheader in Batavia. Although the crowd was announced as 866 people, it was a welcome sight for Giolito.

"It feels unbelievable to be able to pitch in front of a crowd in a stadium, it's something I haven't done for a really, really long time," he said. "So getting that first one (win) under the belt felt good. My arm felt really good, and I'm glad I gave the team a chance to win and we were able to pull this one out."

Giolito's plan of attack on the mound was simple, yet effective. Through five innings, he threw less than 60 pitches. 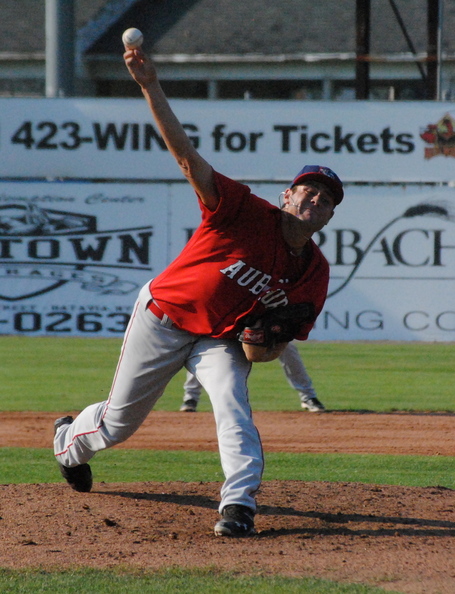 "Definitely fastball early today, getting ahead with the fastball," Giolito said. "In some situations I'd throw a curveball early or a changeup early to keep them on their toes. But fastball early was working and curveball late as kind of the put-away pitch that they would hit weakly or I would strike them out on."

"Above average stuff. I thought he got away with some pitches up in the zone, but that tends to happen at this level." - Doubledays' manager Gary Cathcart on Lucas Giolito

In his ninth start since having Tommy John surgery last year, Giolito said his feel for his pitches has continued to progress.

"Today the fastball felt good and I was able to throw that for a strike relatively easily," Giolito said. "The curve ball and changeup both were complementing it well, both felt good. The feel is coming back and I know the velocity is coming back with all three pitches."

"Pretty self-explanatory watching that performance," Cathcart said. "Above average stuff. I thought he got away with some pitches up in the zone, but that tends to happen at this level."

Giolito had eight starts in the GCL this season before being called up. He went 1-1 with a 2.78 ERA.

The GCL Nationals captured the division title earlier this month, and are on track for one of the best records in league history.

But it's not like pitching in front of a crowd.