Bruce Chen has parlayed a once-top 10 prospect ranking into a 15-year major league career. This PDB looks at what Chen has working in his favor, and what the Nats may do about it.

Hang around North Boulevard in Richmond in the mid to late 1990s, and chances are you were either taking in an R-Braves game or fearing for your life.  If it was the former, the name Bruce Chen would often pop up in conversations about prospects with potential, in the vein of other R-Braves alums like Tom Glavine and John Smoltz..  There was good cause: Chen was ranked by Baseball America as the game's #27th best prospect after the 1997 season.  After he came through Richmond in 1998, he had elevated to the fourth best minor leaguer the sport had to offer.

But pedigree and major league performance is not always linear.  Chen has been off and on in the majors since the 1998 season, only once approaching 200 innings pitched (with the Orioles in 2005).  He has pitched both as a starter and as a reliever, and in the American League and National League, never eclipsing +2.0 fWAR.  He's been a fine piece, certainly.  The 2013 season is going pretty well for him on the surface, as his 2.25 ERA makes clear.  However, it's not because Chen has found the poise and stuff from his prospect days.

What is helping Chen this year?  First, he is getting an insane amount of fly balls and pop ups -- 54.2% in total, actually.  He's far and away the leader in this category when sorting by 70+ innings pitched.

So, it makes some sense why his BABIP is down, because fly balls have the lowest BABIP (a paltry .124) among routine batted balls, and pop ups rarely go for hits.  Chen's outperforming the average with a .053 fly ball BABIP.  And wouldn't you know, his expected BABIP is actually .255 -- closer than you may have thought to his actual figure.  Like an elevator man, he's doing his job well when things are going up, down, and stopping where you want them to.

Chen's BABIP -- and underlying batted ball profile -- is helping him to strand runners on base.  This is further supported by the fact that batted balls against Chen only fall for hits 22% of the time when runners are on base.  Want to know his career value?  It's .299.  It's really almost an ideal way to draw it up for someone with Chen's skill set, which is one where his "hard" pitches rarely break 86 MPH.

The thing is, though, we'd be talking about how this is the same old Chen, I think, if his HR/FB rate was more "in whack," so to speak.  It's not totally unexpected that a fly ball pitcher would have a respectable HR/FB rate; Fangraphs states that "[a]s for fly balls, pitchers with a high fly ball rate will have a lower Home Run Per Fly Ball rate than other pitchers."

Since 2009 though, only David Aardsma (in 2009) had a similarly high FB% and low HR/FB rate as Chen does.  Side note - you'll see through that link that Tyler Clippard's 2011, to perhaps little surprise, can be summed up as being spent in the clouds. So even though Chen is to some degree expected to limit home runs on his fly balls, he's still over-performing expectations.  Make no mistake: When you're getting a majority of fly balls, and just 5.5% are leaving the yard, you're going to look like you're having a great year.

But why exactly is Chen getting what would seem to be a fair amount of good fortune?

Results on Chen's fastball, sinker, and cutter -- which make up about 70% of his offerings -- help demonstrate that he's getting fly balls and/or pop ups on pitches just about everywhere.

First, here's his fly ball profile on Brooks, which separates fly balls from pop ups.  This chart is for his three "hard" offerings: 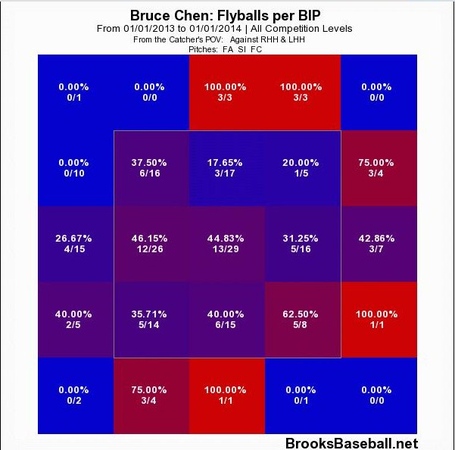 A lot of flies outside the zone, and a decent amount inside.  Now, for pop ups: 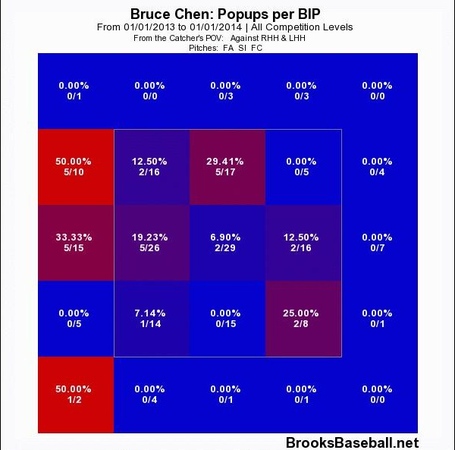 Add some more outside the zone, with more also inside the zone (the average pop up rate in 2013 is 9.6%, so anything over that is quite nice).

When Chen throws strikes, which is often (57% of the time), and sees contact on those pitches, he's got a pretty high fly ball rate.  When he's out of the zone, he turns into an extreme fly ball pitcher.  We know his BABIP isn't as lucky as it might seem, but it's hard to think that he could maintain his low HR/FB rate the rest of the year.  This is particularly so the more games he starts. Several fly balls have come close to leaving the yard at Kauffman this year: 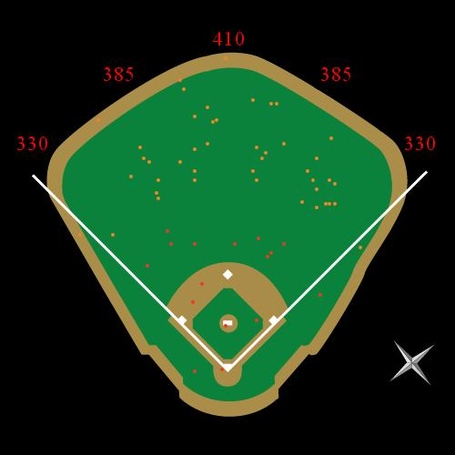 While he may have something going in his strand rate, even that may decrease if a few more fly balls turn into home runs.  Perhaps Chen will pass some of that good fortune off to the Nats for a game, and allow the D.C. team to continue to accumulate the wins it must have to have a shot at October baseball.