The Mets' Dillon Gee Starts Against the Nationals' Offensive Juggernaut

Dillon Gee is a pretty good pitcher who enjoyed success last season. He's taken something of a step back this year, and with the Nats' sizzling offensive performance of late, signs are favorable for D.C. in the nation's capital tonight.

Share All sharing options for: The Mets' Dillon Gee Starts Against the Nationals' Offensive Juggernaut

Even if you aren't statistically minded or only caught a few Nats games this year, you'd have to agree that by and large, the team's offense has played poorly. The commentariat here has chronicled the struggles of Denard Span, Adam LaRoche, Ryan Zimmerman, and Danny Espinosa (among others) extensively. So I don't aim to replicate all of that; what is done, is done. 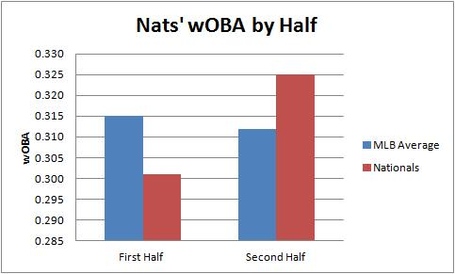 For more context, the Nats' first half wOBA value placed 25th in the majors; that's pretty bad. If you look at the second half, however, the team has soared to 6th best. And that's not even including last night's dismantling of the Fish. The team is striking out less (21.0% first half against 18.5% over the second half) and hitting the ball with more squarely (19.7% line drives against 22.9% this half).

You'd have to cop to some optimism, then, about D.C.'s chances against Dillon Gee tonight. I think this is true even when considering that Gee has really pitched pretty decently against the Nats over his career, sporting a 18% strikeout rate and an 8% walk rate. He's striking out fewer batters this season, but is also walking less.

FIP and xFIP liked Gee enough last season, rating him as just barely above average in the former category and 9% better than average in the latter. With some better luck on HR/FB%, it's fair to say Gee could have approached +2.5 to +3.0 fWAR last year.

Gee's drop in strikeouts this year has been accompanied by a drop in ground balls in favor of a rise in contact percentage and line drives -- two directions hurlers don't want to be traveling in when they don't overpower guys.  Notably, the 27-year-old has seen a rise in fastball contact. Throwing the pitch 26.1% of the time in 2012 (his most frequently thrown offering), batters made contact just 11.7% of the time.

In 2013, Gee is going to his 90 MPH offering even more (27.2%). He's also seen a big jump in contact on the pitch, where batters are putting the ball in play 17.3% of the time. Of course, not all contact is bad -- perhaps the righty is just getting more routine pop fly balls. 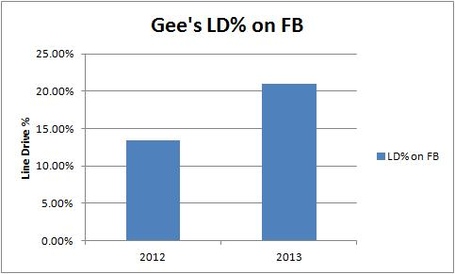 Here's where baseball can get funny, though. Despite these indicators, Gee's fastball wOBA actually higher last season (.388) than it is currently (.370). Perhaps there's another reason why his SIERA, at 4.16, is over half a run higher in 2013 than it was in 2012.

The more thorough answer as to why his BABIP is so high isn't as easy. He's getting a little more vertical and horizontal tilt (movement) with the pitch this season versus last, but the location is mostly the same. Similarly, batters are actually swinging slightly more often at the slider this year.

So it's a matter of hitters whiffing less and contacting more, resulting in better batted ball results, right? Well, batters are whiffing less, but just 1.5% less often. After all of this, I think it's just a matter of some good batted ball fortune.  That's not all that exciting (from the Nats' perspective), but it's something.

Back to the Nats' offense. The team has performed better against the fastball since the second half began, but continues to rate poorly against sliders.  And in both cases, the run values are negative. But when you're going good, good things seem to happen -- as many felt was the fortune of Washington's opponents earlier this year. For that reason, the favorable upward trend should continue tonight.