Nationals Keep Winning And Davey Johnson Likes What He Sees...

A strong start from Gio Gonzalez. Some big blasts from the Washington Nationals' hitters. Three straight wins over the Miami Marlins. Nats' skipper Davey Johnson was in a good mood after a three-game sweep of the Fish in the nation's capital.

Share All sharing options for: Nationals Keep Winning And Davey Johnson Likes What He Sees...

Davey Johnson said that after two long innings for Gio Gonzalez at the start of tonight's game, in which the lefty threw 43 pitches, he wondered if he would even get five out of the Washington Nationals' 27-year-old starter. "After I think about the second inning he really turned it up a notch," Johnson said, "and shoot, went out there in the seventh and shoot I was even thinking about going eight with him, but he ended up pitching a great ballgame. It was outstanding. Just when we needed it."

"After I think about the second inning he really turned it up a notch..." - Davey Johnson on Gio Gonzalez's start

Gonzalez came out of the first two innings unscathed and after a short 3 1/3 inning-outing in Kansas City last week in which he threw 77 pitches total and got knocked around, he bounced back with seven scoreless innings tonight, throwing just 65 pitches over the next five frames and retiring 16 of the last 17 batters he faced in the Nationals' 9-0 win. "He's been struggling, but he hasn't brought it back together," Johnson told reporters after Gonzalez recovered from the rough start to his 27th outing.

"Tonight was outstanding," he said, "We were very short and I was hoping for a laugher and we got one and that was sweet. I told [Craig] Stammen to tell [Tyler] Clippard and [Drew] Storen I'm going to do everything in my power to keep from going to them. So that was big."

"For some reason, again, he was leaving the ball up," Johnson said of Gonzalez's early inning struggles. "And he was getting some outs up there. [Home plate umpire] Alfonso [Marquez] has a tendency to have a small strike zone but a lot of [Gonzalez's] pitches didn't look that close to me. He had a little trouble getting the feel. What actually got him through was his changeup, got him through the early innings, but at the end of the game everything was right there where it needs to be."

And the run-support was there too. The Nationals' pregame notes pointed out that before tonight, Gonzalez had received, "... one or less run(s) of offensive support (while in the game) in 14 of 26 starts this season." The Nationals scored nine runs tonight before Gonzalez was replaced on the mound by Tanner Roark in the top of the eighth. Bryce Harper hit a two-run home run. Jayson Werth hit a three-run blast. Anthony Rendon drove in a run and Ian Desmond's three-run blast gave the Nationals nine runs in the series finale with the Marlins.

"If I knew the magic formula. I'd really make some money. Don't know it." - Davey Johnson on Nats' winning ways

"When you don't play like you think you're capable of playing," Johnson said of the late-season surge, "whether it's pitching or hitting, you kind of want to make amends. And I think guys want to start doing the things that they know they're capable of [doing]. And there's been a good feeling on this club for about two weeks where it seems a little more relaxed. More quality at bats and all that kind of thing. It's fun to watch."

So what's different? "If I knew the magic formula," Johnson joked, "I'd really make some money. Don't know it."

He did, however, offer some ideas about what went wrong. "I just think we've had with [Danny] Espinosa with that problem and then some guys struggling early. Some of the pitching not as good. Sometimes you press, try to make things happen. And Desi was expanding the zone early, trying to make something happen. And I think more guys trust the guys around them. If they don't get the pitch, leave it to the next guy." 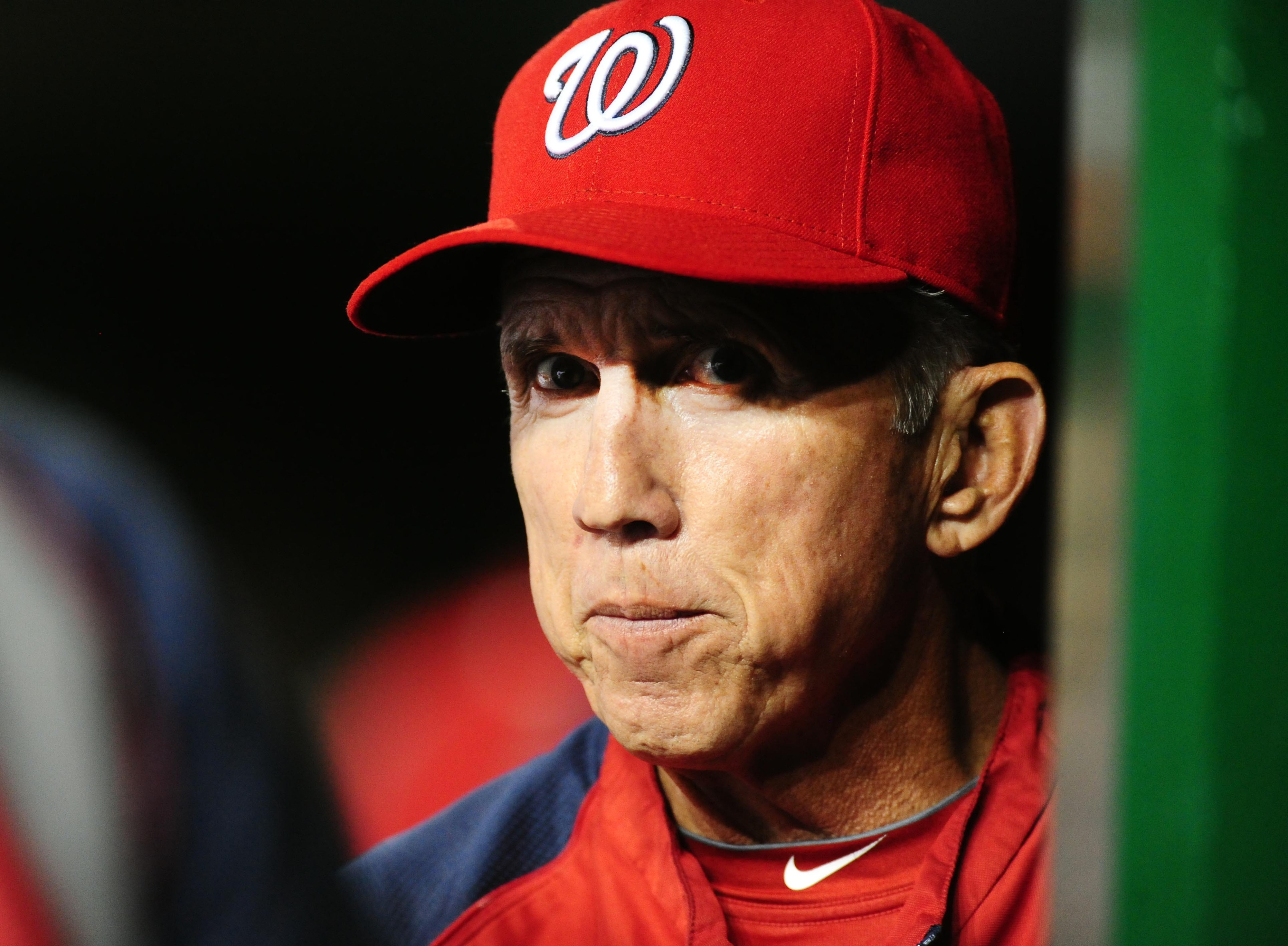 Through it all though, Johnson said he's preached the same message. "One thing that I've preached for everybody," he explained, "is you never take anything for granted. When you hit a ground ball to short, you never take it for granted he's going to field it and throw you out. And the same way with winning games.

"No matter how many you're behind, if you take it for granted that you can't catch nobody and you can't play good, that's a losing attitude. And I've never sensed that attitude here. So, strange things happen in this game. All we have to do is keep playing good ball. We're still making little mistakes, little baserunning mistakes here and there. But we've got to correct that to play at our peak."

Playing close to their peak in the last month-plus has them 6.5 games out of the race for the second Wild Card spot.