The Braves' Kris Medlen is Vincible This Year

Kris Medlen turned in a pretty spectacular 2012, especially in limited duty as a starter. 2013 has been different. This PDB looks at Medlen's fastball for a window into his troubles.

Share All sharing options for: The Braves' Kris Medlen is Vincible This Year

Despite a double-digit deficit to the Atlanta Braves and a sub-.500 record, there are still compelling reasons to watch the Nationals each night. The development -- or lack thereof -- of offensive production is one reason. This is because much (if not all) of the 2014 starting lineup projects to be the same as this year. Whether the Nats retaliate for Bryce Harper's beaning is another.

An encouraging performance from the bats against the Braves' Kris Medlen would be cause for some enthusiasm; it appears that he is not the same utterly dominant hurler from last season. If Davey thinks the best response is for the offense is to let the bats do the talking, his team will see a hittable pitcher tonight.

The Braves drafted Medlen in the 10th round of the 2006 draft from Santa Ana Junior College in California. He was often among Baseball America's top thirty Atlanta prospects as he progressed through the minor leagues, peaking as their 9th best minor leaguer after the 2008 season. In a prescient move, BA ranked his change up as the best in the international league in 2009.

At the time, there was reasonable concern about Medlen's career trajectory, despite the fact that he had what John Sickels called an "outstanding" minor league run. For example, Keith Law told Talking Chop before the 2009 season that Medlen was

absolutely a major-leaguer, although the guy I saw in the AFL didn't line up with the great year he had in AA. He was 87-90, his slider kept backing up on him, and he couldn't keep his front shoulder closed; he threw strikes and showed an above-average changeup. He's also a little guy - I don't care so much about short, but he has a reliever's body. All signs point to the pen right now.

Medlen debuted in the bigs that year, working primarily out of the pen over 68 innings. His strikeout numbers were good, although he walked an above-average number of hitters compared to the average major league pitcher. Both his strikeout and walk rates fell in 2010, and unfortunately so too did his ulnar collateral ligament. Tommy John surgery largely shelved Medlen until last year.

And what a year it was. Even in April, Law had seen enough to bump Medlen into at least back-end starter role, noting his strike-throwing prowess and plus change. After 138 innings pitched, here's how some of his numbers ended up:

Some regression was expected, of course. This season, he's sporting a 17.1% K% and 6.1% BB. His batted ball profile, as you'll see, has also seen fewer grounders and a higher rate of homers per fly ball. Add it all up, and you have a nearly 4.00 FIP pitcher over 22 starts, with much of the damage coming since around mid-June.

Medlen works with both a four seam and a two seam fastball, change up, curve, and cutter. Although Brooks Baseball has his two seam labeled as a sinker, Medlen has previously stated that he throws a two seam.

That four seam value is not a misprint: The pitch is actually the worst in the majors by raw value and by value per 100 pitches.

As you might expect, Medlen's pitch values are worse across the board this year than last -- and he's thrown just 7 fewer innings in 2013 than 2012.

Medlen's ground ball percentage is down almost 9% from 2012, although he's never been much of a ground ball guy (46.1% career rate). The decrease has come at the expense of a modest increase in line drives, which are fueling his high BABIP.

Finally, his 2012 HR/FB rate was a sparkling 5.7%. It's oft repeated, but that this stat has swung should be no surprise, because HR/FB% is notoriously variable.

Michael Barr of Fangraphs wrote towards the end of July that Medlen was a changed man from last season. He makes several salient points to support that conclusion, and one of the thrusts of the article is to highlight Medlen's increased cutter usage. In fact, since June 14 -- which Barr identified as a starting point for some of Medlen's worst results of the season -- Medlen's cutter was getting tattooed by righties.

Unfortunately for Medlen, that's not his only issue: His four seam fastball is getting lit up like its 1996 and Ali is in town. You saw above that the pitch has decreased over 20 runs in value since last season. Don't just take it from run values, however. Check out his four seam splits from the last year against lefties and righties, measuring by wOBA against, versus this season:

Oddly, though, nothing immediately jumps out from some of the standard statistical warning signs. Compare his 2012 four seam velo, release points, movement, and usage with those from 2013:

Also similar is Medlen's batted ball profile on the pitch. Sure, his four seam usage is up slightly, but c'mon -- 2% isn't turning guys from Rey Ordonez to Miguel Cabrera. So it's got to be something else.

Has the four seam shown warning signs since June 14, the date Barr pointed out as starting a bad run for Medlen? I'm not sure there, either; note below that he's seen pretty reliable movement on the offering each start since then, and his two outliers both came in starts at Philadelphia (suggesting to me that there may be a wonky PitchF/X issue here): 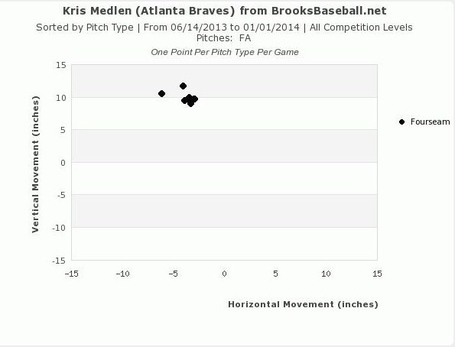 It appears that at least some of Medlen's troubles are attributed to his fastball location. Last season, he seems to have hit the edge of the strike zone more frequently, while also getting away with poor location on the rare times he left a fastball out over the plate.

First, here's a click-to-switch image of his four seam heat maps. The first image is 2012, and the second is 2013; lefties are on the left, and righties are on the right. Note the greater frequency of pitches over the plate in 2013, as designated by the increased color intensity. 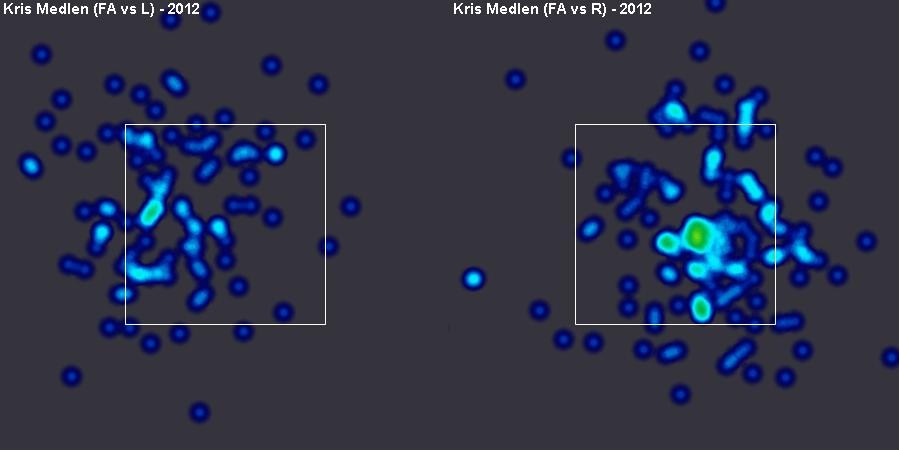 It's not just location, either. Batters are doing much more damage on contact with four seamers in 2013, as this chart and this one both show (here are the same ones, ISO and TAv, for 2012).

Both Medlen's four seam and his cutter have been negatives this season, and the fact that 9.3% of hits against him are going for extra base hits doesn't help either (the major league average is 7.6%).

Looking just at the four seam and without having scouted him in person, his location ("command") with his heater has been problematic. But it's also true that batters are really doing damage when they hit the pitch this year (.635 SLG versus .327 last), even though the batted ball results (per Brooks) are largely identical between 2012 and 2013.

Taking advantage of mistakes: The 2012 Nats appeared to do this with respectable frequency, while the 2013 squad has seriously lacked the same. Regression in a favorable direction -- assuming there's true talent there -- may be too late for playoff hopes, but there remains the need to show long-term talent and ability. And pride, too.