The Atlanta Braves have won twelve straight after taking the first two games of three in D.C., and things almost got ugly when Washington Nationals' slugger Bryce Harper got hit by a pitch from right-hander Julio Teheran in the fifth inning of Tuesday night's game.

Share All sharing options for: Benches Clear In D.C.: HBP On Bryce Harper Stirs Up Nationals And Braves' Rivalry

"Is their pitching that good?" 70-year-old skipper Davey Johnson asked after his Washington Nationals lost a 2-1 game to the Atlanta Braves Tuesday night, dropping a second straight low scoring, one-run game to their divisional rivals. The Nationals managed just five hits, one of them a home run by Bryce Harper...

In his next at bat after the home run, Harper was hit by a pitch from 22-year-old Braves' right-hander Julio Teheran. Anthony Rendon had doubled to start the fifth inning, but Gio Gonzalez popped up a bunt attempt in the next at bat, bringing Harper to the plate with a runner on second and one out.

"It's a part of the game. And I guess it's something he's got to do." - Bryce Harper on HBP by Julio Teheran

Harper took exception to what he thought was an intentional beaning and a mid-90s heater and the 20-year-old Nats' slugger addressed his complaints directly to the opposing pitcher as he took a few slow steps toward first base. Brian McCann stepped between the Nationals' outfielder and his own pitcher and the benches and even the bullpens emptied out onto the field though nothing but heated words and glares were exchanged.

Asked if he was surprised he got hit, the Nationals' 2010 no.1 overall pick said, "I hit that ball pretty far off him, so no, not really." He also explained that he had no intention of charging the mound.

"I wasn't going to out there," Harper continued, "I mean, 14.5 games down and I need to be in the lineup. So, he's got to do what he's got to do. If I walk off on somebody and he wants to drill me, let him drill me and I'll stand on first base and say some choice words and get over it."

As for McCann getting in his face, the former catcher said he'd do the same. "If I was McCann and I thought my pitcher was in danger, I'd jump in front of him and do the same thing he did, so it's just part of the game and it's something that they had to do."

"I asked [Joe] West," Davey Johnson told reporters after the game when asked if he thought it had been intentional on Teheran's part, "'If you feel he hit him intentionally, you can throw him out rather than put us under a warning,' and he said, 'Well it's marginal because it was downstairs.'" West issued a warning to both teams, but the Nationals didn't respond.

"I don't think Harper did [anything] when he hit the home run. That wasn't anything, you know, it wasn't nothing." - Davey Johnson on Bryce Harper

"That wasn't anything," he continued. "You know, it wasn't nothing. I don't know whether [Teheran] was trying to go inside or brush him back and hit him in the leg. I thought [Ryan Zimmerman] answered the thing right, almost hit one out of the ballpark. That's the way you answer that sort of thing and you file it for future reference. Nothing you can do at that time to level the playing field."

Zimmerman flew out to center, deep enough to allow Rendon to take third, but Jayson Werth popped up to short to end the bottom of the fifth after the Braves had taken a 2-1 lead over the Nationals on Evan Gattis' two-run single in the top of the inning. B.J. Upton singled and stole second in the top of the fifth and after Gonzalez walked Andrelton Simmons, Teheran bunted both runners into scoring position for Gattis, who only entered the game after Jason Heyward had a neck issue in his first at bat that later took him out.

"The big thing," he said, "they bunted him over and we didn't. Those little things are big." - Davey Johnson on Gio's failed bunt attempt

Gonzalez ended up going seven innings, allowing six hits a walk and two runs while striking out five and throwing 96 pitches overall a start after a rough outing in Detroit in which he gave up 11 hits and 10 runs in 3 1/3 IP. "I thought he was outstanding," Davey Johnson said after the Nats' lefty fell to (7-5) overall on the year with the loss. As the Nationals' manager noted, however, Gonzalez's failed attempt at a bunt in the fifth hurt in the end. "The big thing," he said, "they bunted him over and we didn't. Those little things are big."

The Nationals threatened again in the seventh against Braves' lefty Luis Avilan. Avilan pitched around Jayson Werth with two runners on and walked the Nats' right fielder to load the bases and get to Adam LaRoche, then got a weak groundout out of the Nats' first baseman with a 2-0 fastball to strand three runners and leave the Nationals 0 for 5 with runners in scoring position on the night. "That's why he left him in there," Johnson said of Avilan. "He's had a good year -- to not give him a good pitch to hit and make him go after something. [LaRoche] had him in a favorable count."

LaRoche, Johnson said, was, "... just trying to make something happen. Base hit there, we win the ballgame."

They didn't get the hit and they lost by one run and fell another game behind the Braves in the division and ended the night 8.0 games out in the Wild Card Race.

"I never look too much about how many you're up or how many you're behind," the Nationals' manager said. "It's how you play every day. And we just need to play better. It's that simple."

• McCann Calls For A Fastball: (Images screencapped via MASN/MLB.com) 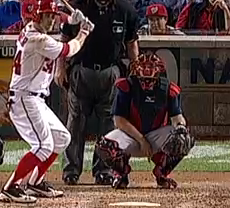 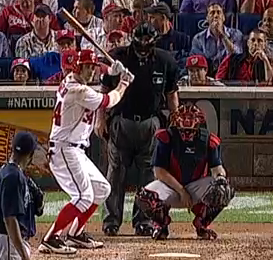