Last week, we looked at the Nats' Anthony Rendon's performance against fastballs, sinkers, and cutters. The prognosis: Rendon fought a mid-year rough patch on the heels of a slight bump in whiff percentage and grounders hit at fielders, but has sandwiched that phase with two periods where he's hit the ball hard. How has he done against breaking balls and offspeed pitches?

We saw last week how Anthony Rendon fared against fastballs, cutters, and sinkers -- denoted by the awesome Brooks Baseball as "hard" pitches.

In short, his season line to that date showed three (arbitrary) segments of the Rice product's first big league campaign.  During the first stint, from June 5 - June 26, Rendon showed an excellent .420 wOBA over 77 at bats, and he was hitting line drives on hard stuff regularly.  Interestingly, the same was mostly the case between June 27 and July 31, except that his outcomes suffered to the tune of a putrid .230 wOBA.  His third stretch, roughly August 1 - present, has been again marked by a good number of line drives on hard pitches, while his offensive production has returned.

Rendon's performance against breaking and off speed pitches (which I am just going to lump together and call "breaking" for the sake of brevity) during this time was mostly similar, perhaps unsurprisingly.  Conventional wisdom is that breaking pitches are more difficult to hit than fast, but often straight, pitches.  No less an authority than Pedro Cerrano, of Major League fame, sure thought so:

Pedro Cerrano: Jesus, I like him very much, but he no help with curveball.

Here's another quick way to think about facing a breaking ball from, say, Clayton Kershaw.  If my math is correct, and it probably isn’t, dropping an object from 6ft replicates both the time (roughly .60 of a second) and distance (his curve has 6ft of break if you include gravity) a batter has to react to his hammer. Stand up and drop a pen or a stapler. Now imagine a baseball coming at you and breaking that distance, while at about the .2-.3 sec mark of the object's fall you have to decide whether to swing.

Don't forget about actually making contact. Maybe if you do that, it falls in for a hit.  Impossible for most.  But for the majority of this year, Rendon has been able to perform well against bendy stuff.

Hurlers approached Rendon as you might expect with breaking balls, tempting the rookie with low and away offerings.  There's not much opportunity to square one up here: 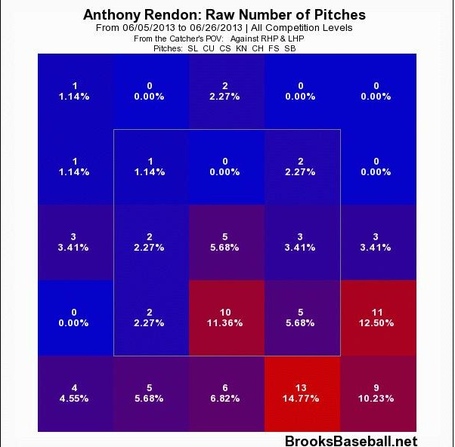 Bearing in mind that we've got a small sample of data, Rendon made hard contact with good frequency (close to 30%), just like he did against hard stuff.  If you total up results from Baseball Prospectus's leader boards, the average LD% on curves, sliders, and change ups is right around 21-22%. That's good.

It's also worth noting that he had a high BABIP on breaking pitches during this time, too.  His line drives account for the bulk of this figure though; as best I can tell, he only hit one breaking ball ground ball in the infield that went for a hit (see the blue dot at deep short/third here).

Perhaps more importantly, Rendon resisted the urge to go fishing too often on the low and outside offerings: 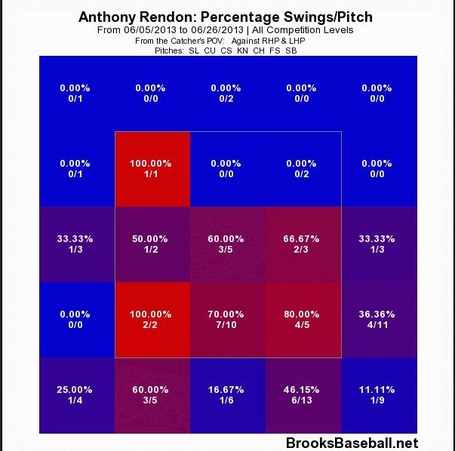 See the three squares in the bottom right that show swing rates of 4/11, 1/9, and 6/13?  Of those 11 swings, Rendon missed 6 times (54.5% whiff rate).  That's not a good rate, but the important matter is that he wasn't swinging so much that he significantly affected his ability to barrel the ball.

Anyway, Rendon was still roping line drives over 21% of the time against both breaking and offspeed pitches.  This value is 5% shy of the mark he posted against fastballs, but as mentioned earlier, it's about average for several breaking pitches.  Once more, pitchers kept going low and away.  And again, Rendon was good about not swinging when the pitch was in those zones (sort of the backwards "L" section): 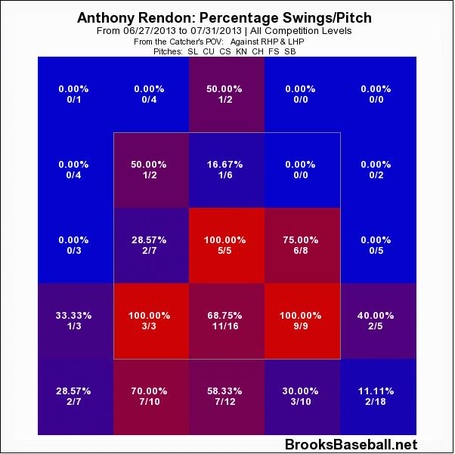 Here -- when Rendon was going poorly -- he actually whiffed on the seven low/away cuts all but once.  Now, of those six swings and misses, four went for strikeouts.  That's the same number he had during his June tear in the same section of the zone.  So, contextually, it doesn't seem that we can attribute his July swoon to trouble making good contact on breaking pitches.

The second baseman continues to see 30% breaking pitches, and, like his June run, is hitting line drives at a greater than average clip -- over 30% of the time, in fact.  Twirlers continue to target low and away.  And he's spit on more of the junk than ever before: 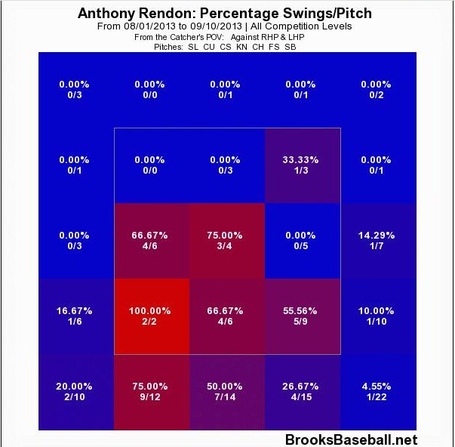 However, after comparing the graphs, Rendon's biggest weakness on breaking pitches appears to be swinging at pitches in the low "9/12" zone, above.  He's hitting 1/8 on the season against breaking pitches there, with close to a 40% whiff rate, too.

If you look here, here, and here, it seems that right now he's hitting breaking pitches for ground balls right at the third baseman enough to depress his overall line.  Sure, BABIP on grounders isn't high, and it's worth again repeating the small sample we're dealing with, but that appears to be it.

What is the bottom line on Rendon and breaking balls, then?  He's seen a consistent diet, with two periods of above-average line drive contact surrounding one average stretch.  He's also done well to lay off unhittable offerings, but appears to have a slight vulnerability low and a nick inside.

Rendon's limited big league time suggests that he can hold his own against both hard and breaking pitches.  His contact and swing rates don't suggest any real trouble, and a closer look at some of the results suggests that the Baseball Gods are just doing what they do from time to time.

Surely, the above stat-heavy read has been nauseating, and it doesn't really explain just how Rendon does what he does.  So, I'll close my look at Rendon by quoting Project Prospect's scouting report on the former Owl (I've said it before, but it's a great two part article).  Steve Carter wrote, using the following .gif to demonstrate, that:

Rendon's choice of tipping his barrel to get it moving and create early bat speed -- read, free bat speed -- while bringing his front foot toward the plate into a neutral position is an efficient manner of getting to a locked, loaded, and balanced position. This is arguably the most important position for any hitter to get to. Without it, you'll either be late, weak to the ball, or both.

From this position, Rendon can go and get to any pitch in almost any quadrant of the strike zone. He is on balance and in a rock solid position from which he can punish any poor round object thrown his way.

While most other players do this move seamlessly as part of their actions, Rendon has chosen to break them into two parts. And because he completes these actions in separate moves, he allows each action to have it's own importance.

This explains why Rendon can tattoo both hard and breaking stuff.  Finally, a statement by Carter I fully agree with (and enjoy):

His hands are relying on the body to supply the power and bat speed, but Rendon's hands have a clear goal. And that goal is to get flat, get forward quick, find the ball and then ruin pitcher's egos. No turning into the ball with dead fish hands and hoping the barrel happens to run into the oncoming pitch here.

Here's hoping both the team and Rendon keep up their late season run this evening.