Ryan Zimmerman - the Face of the Franchise - ambled through most of 2013 with relatively mediocre numbers. Since the middle of August, however, he's cranked up the power in a big way. What explains this improvement? We look at stats and video to find out.

If you check out his season totals, Nationals third baseman Ryan Zimmerman has had a good offensive year, which should be no big surprise to D.C.'s fans. Presently, Zimmerman's .281/.353/.480 line puts him 31% better than the average major league hitter. This performance is good for the 6th best offensive display among all qualified major league third basemen.

It's really the same Zim we've seen over the past several season, if not better. Since 2009, here are the Face of the Franchise's seasonal wRC+ values, which normalizes offensive output (100 is average, and higher is better): 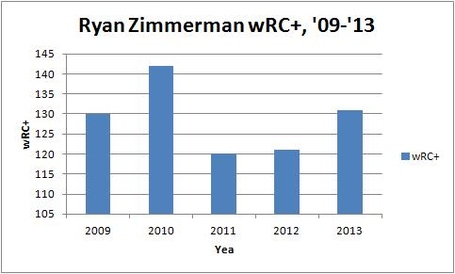 As Fangraphs' Michael Barr pointed out earlier this month, though, Zimmerman hasn't been rolling along at a steady clip all year.

From the beginning of the season to the middle of August, Zimmerman was hitting .269/.343/.431 with 13 home runs over 443 plate appearances. That’s not awful, but at the price most [fantasy] managers were carrying Zimmerman at, I’m pretty sure everyone was thinking the same thing about his future on their roster. From August 15th to [September 13], however, the proverbial switch flipped. In that span he’s hit .312/.370/.624 with 10 home runs over 119 plate appearances. Yahtzee.

To display things a little differently, check out Zim's rolling triple-slash throughout the season: 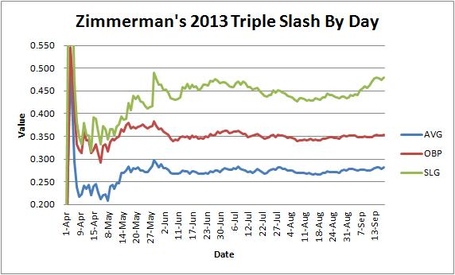 You can see how a .624 slugging percentage over a month-plus of baseball will improve a slugging line, from .431 before August 15 to .480 as of early Wednesday evening.

And the power department is really where the difference for Zimmerman has come. In September, for example, Zimmerman is obliterating anything that comes his way: Almost half of his 22 hits have been home runs (10). It's not a wholly unbelievable stretch of baseball, although even the most optimistic among us would be foolish to expect an entire season of .319/.373/.783 baseball (the third-sacker's September line).

Why has Zimmerman performed better since August 15?

He's seeing mostly the same ratio of pitches during each segment -- about 65% hard stuff, 25% breaking balls, and 9% off speed. Lefties are throwing him a bit more off speed pitches when they are ahead in the count or have two strikes when compared to before August 15, while righties are now going the opposite direction and feeding him more curves. It's nothing tremendous, though.

Zimmerman's power surge has come against hard pitches and breaking balls, as you see below.

ISO, or Isolated Power, subtracts a player's batting average from his slugging percentage to better view that player's raw power. An ISO of .200 or above is great.

On heaters: There's nothing wrong with Zimmerman's performance against fastballs on the whole. It's just that recently, he's been taking no prisoners.

Here's a side-by-side of his hard pitch ISO maps, where August 15 and forward stats are on the right, with the view from the catcher. Note how he's recently shown an improved ability to reach across to the outside part of the strike zone to do damage, and has crushed down the middle mistakes:

Below, I've done the same for ISO on breaking balls. Again, August 15-present is on the right. It's obviously a smaller sample, so keep that in mind. 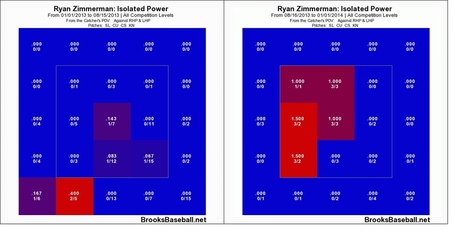 Pretty striking the difference that Zimmerman has seen here; looking at some of his component stats in this subset, it becomes clear that he's presently obliterating sliders (.364 BA/.955 SLG) when he wasn't before (.189 BA/.283 SLG). Fewer of those sliders are ending up on the ground, and more are going for line drives and home runs.

It looks like he's seeing slightly more sliders in the zone recently (see here) than before (here), and has also cut his whiffs/swing down from roughly 20% to 15%. So, some discipline, some better pitches to hit, and harder contact: That's the tale.

To hear Zimmerman tell it, his season is just baseball being baseball. When James Wagner of The Washington Post interviewed him on September 5, Zimmerman said of his power that

"[i]t’s starting to get a little better . . . . I’ve felt pretty good all year. For some reason, I haven’t got … if I can get hot here in the last couple weeks, I’ll be right where I usually am, anyway. It’s one of those things, I wish I knew the answer. It’s just been one of those years."

Here's one thing Zimmerman might mean when he says things are improving.

Below, there are four images of two at-bats. The first is Zimmerman on June 8 against Kevin Correia and the Twins, where he struck out three times en route to an 0-5 day, and the second is him on September 13, where he hit a bomb off the Phillies' Kyle Kendrick. Same ball park, same sort of pitcher (righty, with 90's stuff and control), same pitch velocity (88 MPH on each), but different pitches and locations (that I'm not sure matter all that much for this point).

First, before the ball is delivered.

June 8 (strikeout looking on outside slider): 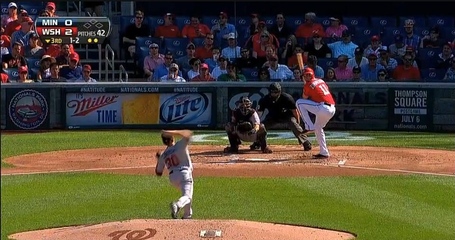 Take note of where Correia is in his delivery -- open, foot planted, arm rotating forward to deliver the ball. Zimmerman is at the peak of his leg kick at this moment. Now, September 13 (home run, inside fastball): 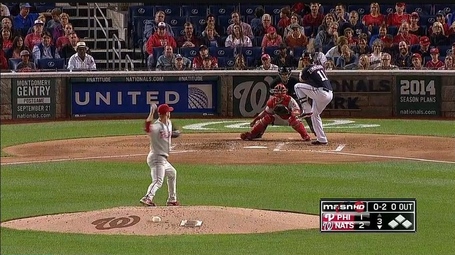 Here, you see Zimmerman is again at the top of his swing trigger, but is a little tighter with the lower half of his left leg. Unlike the pitcher in the first image, though, Kendrick has not yet opened his upper half, nor is his arm/elbow as far forward as Correia's. Allowing that Kendrick short-arms the ball more than Correia (making him actually closer to releasing the ball than you may think based on the images), it appears Zimmerman is just a tad late to get to where he can pounce against Correia.

In an effort to "catch up" against Correia, Zimmerman seems to rush to get his foot down, only to get there too early. This saps him of the good balance and rotation necessary to hit the ball like a ton of bricks. Same pitches as before (and, although the angles are slightly different, the pitches are just about the same distance from the plate -- or as close as I could get it), but notice where #11's foot is. 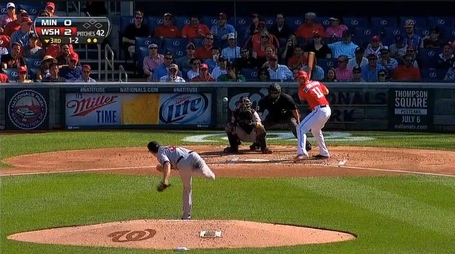 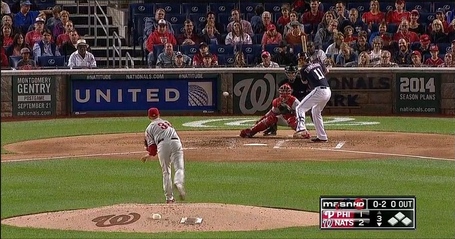 It's clear that Zimmerman is, in the latter image, still "back" on the fastball such that he hasn't compromised his chances to visit souvenir city, which he did about 4 seconds after this point. I can't help but wonder whether this apparently better swing process is one reason why he's looked much better.

Chances are, it's not just a simple matter of timing that is driving Zimmerman's performance. Most anyone can pick out two random examples to prove a point, and it's incumbent on me to state that this in no way conclusively proves that the FotF had timing issues, fixed them, and now it's all gravy. But timing is certainly a salient matter, and it would be interesting to hear from Zimmerman or the Nats' brass/scouts whether it has been something that the Virginia native has battled during the year (if they already have, I apologize for missing it).

Zimmerman has improved his performance against hard pitches and breaking balls during the back end of the season by making pitchers pay for poorly-located strikes. He's reduced his whiffs against sliders while also making more hard contact, and that has made a difference. So too does it seem that his swing is better sequenced, although this is just one of several reasonable explanations on the non-stat differences between mediocre and awesome Zim.

Will he keep it up? As mentioned earlier, likely not. But this performance only has to be sustainable through the end of the year to continue to give Washington life in the playoff race. Doubtless, hot streaks have lasted longer than a month, and with his track record, here's hoping Zim pushes this one into October.

Big thanks to Baseball Prospectus, Baseball Reference, Brooks Baseball, Fangraphs, and MLB.com for stats and images.