Davey Johnson won't be around next Spring making the decisions on the Nationals' opening day roster, but he said this week he thinks the same lineup that took the field late this season for Washington will start the 2014 campaign in Citi Field next march...

Davey Johnson is in charge of filling out the Washington Nationals' lineup card for three more games starting Friday night in Arizona when the Nats begin their season-ending three-game set with the Diamondbacks. In St. Louis, Johnson said he continued to run his everyday lineup out against the Cardinals because he wanted the defending NL East champs to prove something to the Cards. "I kept my regular lineup in there because I wanted us to stand up and show them we're better," the Nats' skipper said. The Nats dropped three straight in Busch Stadium in the series which wrapped up with Wednesday's 4-1 loss.

"I kept my regular lineup in there because I wanted us to stand up and show them we're better..." - Davey Johnson on series in St. Louis

"I'll leave it up for grabs in Arizona," Johnson added, "If the guys have had enough or whatever, I'll go with some rookies." Though he worked Steve Lombardozzi in and out of the lineup, Anthony Rendon got the bulk of the playing time at second as the Nationals attempted to make an improbable run at the second Wild Card spot. The outfield was set with a healthy Bryce Harper, a suddenly-hot Denard Span and a red-hot Jayson Werth left-to-right. Ryan Zimmerman, Ian Desmond and Adam LaRoche filled in around the Nationals' rookie second baseman in the infield and Wilson Ramos played just about every game behind the plate once he returned from the DL in early July.

In his last weekly appearance on 106.7 the FAN in D.C.'s The Sports Junkies on Wednesday, the Nats' outgoing 70-year-old manager was asked if thought the same lineup that's finishing out the 2013 campaign would be the one to take the field on Opening Day 2014 when Washington meets the New York Mets on March 31st in Citi Field.

"Yeah, I do. I do," Johnson said, "It's a heck of a lineup." No "major" changes? "I don't think so," the manager said, "Unless [Danny] Espinosa or [Steve Lombardozzi] beat out Rendon." Outside of that possibility, he said, the Nationals would likely send the starters out and hope for different results.

"[Rendon] was actually learning at the major league level," Rizzo said, "how to play a new position and adjusting to the league..." - Mike Rizzo on Anthony Rendon's rookie campaign

Rendon, the Nats' 2011 1st Round pick out of Rice University, took over for Espinosa at second in early June and through the St. Louis series, the 23-year-old infielder has put up a .261/.323/.391 line with 22 doubles and seven home runs in 96 games and 386 plate appearances over which he's been worth +1.3 fWAR. Nationals' GM Mike Rizzo told 106.7 the FAN in D.C.'s Holden Kushner and Danny Rouhier on Wednesday that he was impressed with the way the Nats' top prospect before this season was able to learn on the fly in the majors. "[Rendon] was actually learning at the major league level," Rizzo said, "how to play a new position and adjusting to the league and learning how to perform offensively in the big leagues and I thought did a great job with that."

Danny Espinosa, who started the season with a torn rotator cuff no one with the team including the infielder would ever say was affecting him at the plate, then suffered a fracture in his right wrist which slowed him further, had a .159/.193/.272 line with nine doubles and three home runs in 44 games and 167 PAs before the Nationals made the switch at second. With the Nats' Triple-A affiliate, the 26-year-old, '08 3rd Round pick had a .216/.280/.286 line with 12 doubles and 2 HRs in 75 games and 313 PAs.

"'He said next year I’ll come back in and fight for a starting spot, just like last year.'" - Danny Espinosa in Washington Post on talk with Mike Rizzo

After the Nats decided not to call Espinosa up when rosters expanded, Davey Johnson told reporters that he didn't want someone he still considered an "everyday" player to sit on the bench. Espinosa said at the time that he was told by the Nats' GM he would come back and compete for the starting job at second next spring. "'He said I’m a big part of this team,'" Espinosa told the Washington Post's Adam Kilgore, "'He said next year I’ll come back in and fight for a starting spot, just like last year.'" 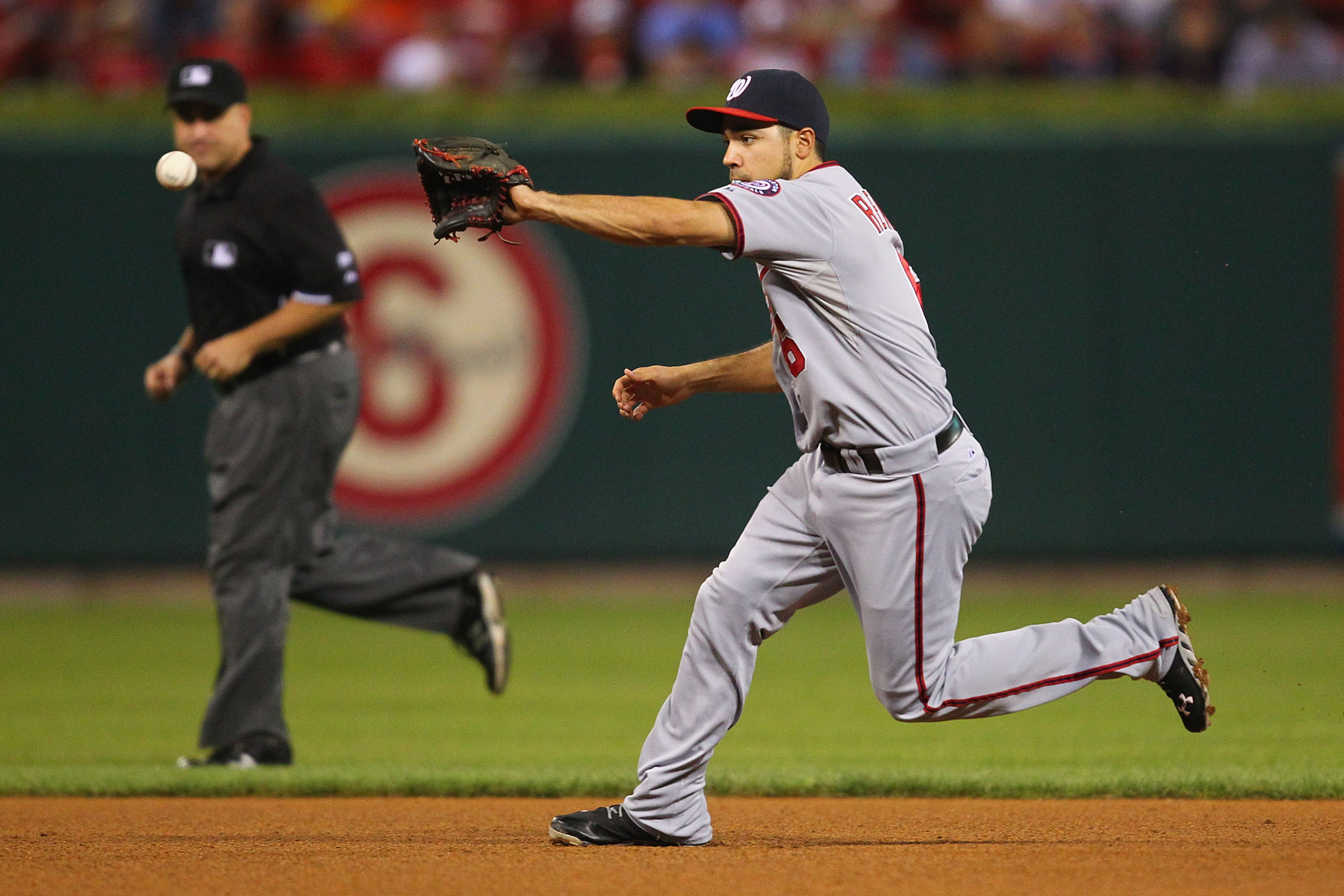 There aren't going to be too many position battles next Spring. Fifth rotation spot? Bench roles? 4th OF? Unless there are changes around the infield, with first base the one possibility sure to be at least considered after 33-year-old Adam LaRoche's rough 2013 campaign, Ryan Zimmerman's strong finish and Ian Desmond's strong season have the left side of the infield set for now. Will there be a battle at second, or has Anthony Rendon set himself apart? Can Espinosa's plus defense allow him to work himself back into the mix if he can find his swing? Rizzo liked the way Rendon developed defensively. Is scrappy Lombo going to stay in his utility role? It won't be Davey Johnson making the call next March...