The Nats' Anthony Rendon's Rookie Season So Far, Part I

Anthony Rendon arrived in Washington with considerable -- and justified -- fanfare. He's had a good rookie campaign that has been marked by the sort of gradual adjustments that make future success realistic. Here, we look at how he's fared against hard offerings.

Share All sharing options for: The Nats' Anthony Rendon's Rookie Season So Far, Part I

When he arrived in the Major Leagues on April 21, 2013, Nats' prospect Anthony Rendon was regarded by Baseball America as the 30th best prospect in the bigs, and the best in the Nats' system. An injury to Ryan Zimmerman meant Rendon would spend some time early in the year at third.  In eight games, Rendon slashed .240/.367/.280 with a .333 BABIP.

Mark Zuckerman chronicled the Rice product's first stint in the big leagues, reporting that Rendon looked forward to his next chance at the Show. Specifically, Rendon was excited to be more comfortable with the major league routine. Thanks to Danny Espinosa's struggles, Rendon was recalled by Washington on June 4 and became the team's starting second baseman. If he was looking forward to getting more comfortable, he had his opportunity.

If you believe you can judge comfort by a stat line, it appears that Rendon has taken advantage of his job security.  He's hit .261/.317/.379 since June 5 (when he returned to the majors), although as Adam Kilgore wrote last month, it hasn't been an entirely steady ride:

So far, Rendon has responded well to the unprecedented burden [of playing an entire season of professional baseball]. Rendon slumped through July as pitchers adjusted to him, throwing fewer fastballs inside and more offspeed pitches away. But he has recently adjusted back, going 8 for his last 26 with two homers and a double.

Overall, Rendon is hitting .259/.321/.387 (.311 wOBA), good for just a tick below average (96 wRC+) offensively. Since the team wasn't doing great on PDB days, we're switching things up and breaking down portions of Rendon's season.

Rendon returned the scene on fire, hitting to a .420 wOBA over 77 plate appearances between his 9th and 26th career games.  Pitchers were apt to challenge the rookie. Check out where the majority of "hard" (fastball, sinker, and cutter) pitches were against him during this time: 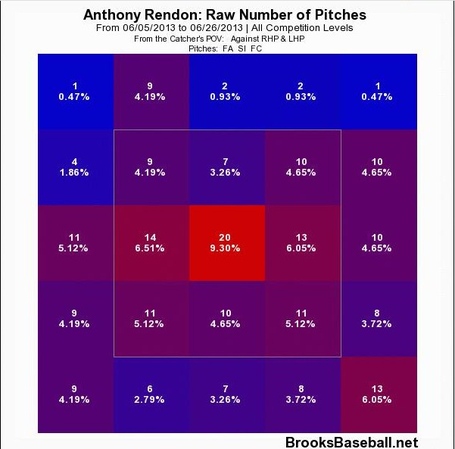 Pitchers threw a majority of hard stuff (70%) to Rendon during this time.  And he did pretty well to turn these offerings into hard contact: 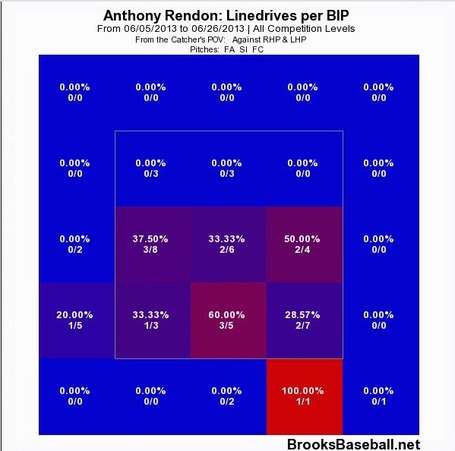 Again, pretty solid contact to support a great short-term wOBA.  However, from June 27 through July 31 (as Kilgore noted), Rendon struggled -- or at least, his results showed as much.

During this stretch, the right-handed hitting Rendon "batted" to the tune of a .230 wOBA, or .167/.217/.287. Not exactly award-winning, and although not many young hitters this side of Mike Trout or Bryce Harper can be expected to post offensive numbers in Rendon's June territory over long periods of time, it was during a stretch where the Nats as a team went a disappointing (weren't they all, though) 12-16.

Did pitchers stop throwing hard stuff to the 22-year old?  It doesn't appear so. According to Brooks Baseball, Rendon again saw close to 70% cheese during this stretch.  Pitchers also appeared to go inside nearly as often; compare the below pitch percentage chart with the first one above: 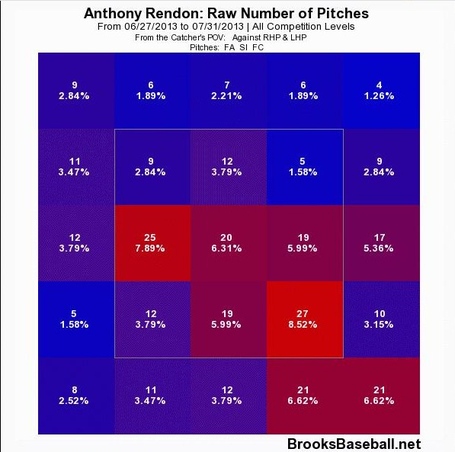 It seems that -- at least with respect to hard pitches -- hurlers now looked away and down and away more often.  Rendon also whiffed on hard pitches 10.2% of the time, compared to 7.7% through most of June, a fair uptick. He continued to stroke the ball at a decent clip though: 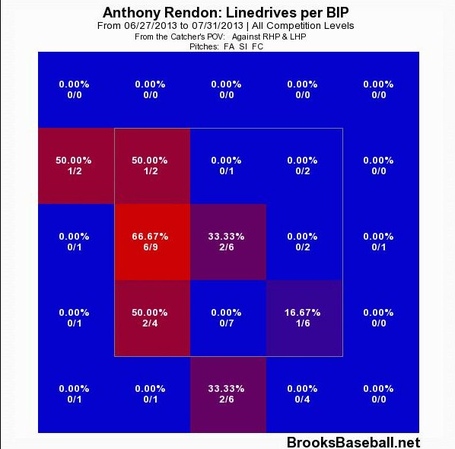 Let's show this another way. Overall, Rendon hit 30% liners when he had a .420 wOBA and 26.7% liners when he displayed a .230 wOBA. Not the sort of drop off one may expect when accompanied by a 2013 Espinosa-like offensive production. 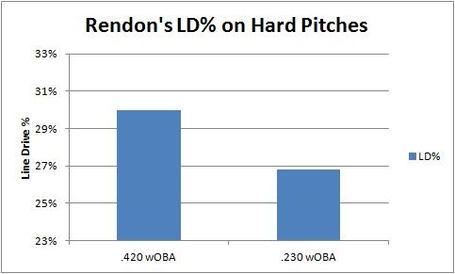 To be fair, the line drive stat is subjective. Further, we haven't looked at hard hit ground balls or bloops that turned into doubles back in June, which count just as much to end stats. As always with small samples and subjective measurements, there's some leeway here. It's nonetheless interesting to me just how similar his hard-hit profile is, yet how drastically different the end result is.

To put a final few points on it, Rendon saw a .428 BABIP on hard pitches when the good times were rolling. And you may have already figured this out by now, but during the rough stretch, his BABIP was .185. A quick glance here, here, and here suggests that for this time Rendon was hitting ground balls at a really high rate (50%) and directly to infielders, which helps to explain things.

So, with respect to hard pitches and his results, Rendon saw generally the same number in roughly the same places with a comparably favorable batted ball profile, but with different results because of a fairly wacky ground ball streak.  Indeed, even with those numbers banked, he hits just 40% of pitches on the ground overall.

It isn't surprising so much that this happened -- a lot of weird things happen during the year. What is good is that a good part of his underlying hitting profile was mostly in line with the June run.

Kilgore observed how Rendon adjusted back to pitchers, and his line from August 2 to now certainly indicates as much: He's hitting .267/.352/.400, good for a .328 wOBA. Look back up at the July line drive rate on low strikes to see the tough time he had squaring up low pitches during his down stretch. It looks like some others may have made the same observation: 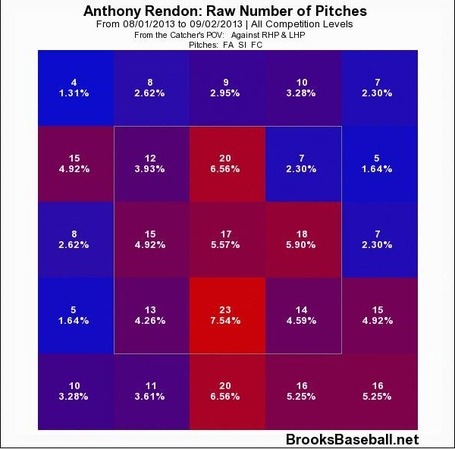 Unlike before, Rendon is seeing primarily low heat. I can't say for certain that this is in response to his non-existent line drive rate on pitches in that area over late June-July, but pitchers have clearly moved from challenging middle and middle-in to chucking low, low, and low on hard pitches. He's still adjusting somewhat here, I'd venture: 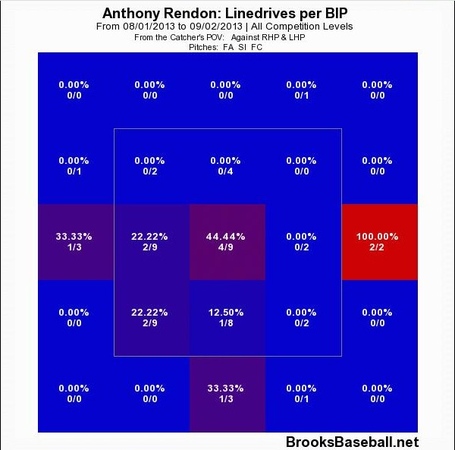 But he's corralled the whiff percentage to near-June levels (8.8%). And, also for the record, Rendon is still seeing ~ 70% hard stuff over this stretch, has his lowest LD% on hard pitches during this period of the season (24.53%), decreased his ground ball rate to his season average, and is seeing his second-best BABIP (.372) of the three periods.

Rendon has consistently hit hard pitches back up the middle over each of the three (arbitrary) points of the year.  Plenty of things have affected his 2013 offensive performance, but on the pitches Rendon sees most often, there really doesn't appear to be too glaring of an issue beyond what looks to be some tough batted luck, a brief bout of whiffs, and temporary increased-ground ball tendencies.

The Nationals have a quality second baseman who has endured a prolonged down period that many young ballplayers face. He may continue to see pitchers target the bottom-middle of the strike zone, and improvement there (along with some normal fortune on batted balls) offers room for optimism on the pitches he sees the most and, consequently, for his overall offensive potential.