Cyborgs? Icons? WDIAM (What Does It All Mean)? This handy guide explains it all. Or at least is a flying head start...

Two years ago I posted the first Federal Baseball Lexicon. The Nationals won 98 games and the NL East in asserting their new position as a true contending team. Last year I did not post a lexicon. The Nationals slipped to 86 wins and missed the playoffs. I’m not saying there is a causal link there – but I am posting an updated 2014 edition just in case. Knowing the language and in-jokes will help newcomers to our corner of the Nativerse as they navigate our articles and GameThreads. If you have a question, please feel free to ask in the comments; and, of course, seasoned vets of the page can add to the list. So without further ado (and in no particular order):

A note about the acronyms: The acronyms below are some of the more commonly used ones from the page, but this list is by no means comprehensive. We tend to make up acronyms at the drop of a hat (WTTMUAATDOAH). If you're not sure of an acronym, just ask. There are no foolish questions here at Federal Baseball. Just occasionally foolish Barves fans.

<u>+1</u>: This is an indication of approval/agreement. It is best done in addition to clicking "rec" on the post or story being approved/agreed with, but that is really courtesy rather than required. It’s fun, though, because of three people "rec" the same post, it turns green. :-) Emphasis can be supplied through punctuation "+1!" or by upping the number. Acceptable variations include using a number to correlate with something in the story/thread. For example, when someone celebrates the fact that the Nationals are 10 games over .500 on a particular day, a fellow enthusiast may reply with "+10!" Which leads us to...

<u>+10 points!</u>: Traditionally awarded to someone who inadvertently makes a double post in a comment thread (usually with the "assistance" of a smartphone). No actual points are awarded, purely intended as good-natured mockery. Nearly all of us have been awarded "points" in this fashion. Thankfully, no running tally is maintained.

<u>Baby Raccoons</u>: A series of icons based on a family of raccoons that would sneak onto catdaddy3000’s porch and steal dog food while he was watching games. As a result, the three baby raccoons became avid Nats fans, and quite knowledgeable. The full story is HERE.

<u>Barves</u>: An NL East rival team, also the mystic keepers of the inner secrets of baseball. A Barve can tell you why Harper admiring a home run and running around the bases is a heinous violation of baseball etiquette, but Justin Upton admiring a home run and trotting around the bases much slower than Harper is perfectly acceptable, indeed, is a laudable display of appreciation of baseball prowess. 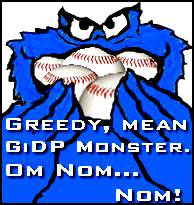 <u>The Blue Guy</u>: This is from a blue icon of the cookie monster stuffing baseballs into his mouth that someone (I think MissB, but don't quote me on that) developed to show the tragedy and pathos appropriate to an occasion when a National hits into a double play. We do not like The Blue Guy. He is evil. And greedy.

<u>Buffarhino</u>: Wilson Ramos. You can’t stop a charging buffarhino! This was a combination of a couple of other nicknames for Ramos – "Tatanka" (a Native American word for bison/buffalo) and Rhino. First used in a Gamethread when Ramos returned from injury in July.

<u>C&D</u>: Charlie Slowes and Dave Jaegler, the esteemed radio broadcasters of the Nats. Also sometimes called "The Voice" and "The Brain" respectively.

<u>Curious, Yellow DP Bird</u>: Sometimes double plays don’t fall into a neat little 6-4-3 box. It’s the second out from a rundown after a runner strays too far, the strike ‘em out, throw ‘em out, or the other curious ways that teams find to end their rallies. So … the curious, yellow DP bird. There’s a reference in there someplace ...

<u>Cyborg</u>: Bryce Harper, who is also occasionally known as "Bam-Bam" (for his initials – Bryce Aron Max Harper) as well as his way with a club).

<u>DeadEyez</u>: Jordan Zimmermann, who goes about his business on the mound with an intimidating lack of emotion.

<u>FOTF</u>: "Face of the Franchise" – traditionally Ryan Zimmerman, although in the past couple of years there has been a growing number of Cyborg advocates. Still too soon, unless/until the Cyborg realizes more of his vast potential.

<u>GameThread</u>: Sadly, we can't make it to ALL the games. Not to worry, though - we hang out in cyberspace on game threads, pulling like mad for the Nationals. They are posted every day, and feature a lot of shared experience, fun and commentary. Gamethreads are where many of the terms on this list were first used.

<u>Goggles</u>: Tyler Clippard. Anyone watching him play baseball knows this one, as his goggles are pretty spiffy.

<u>IMH</u>: "Is My Hero," typically used when one of the Nationals does something great. "IDIMH" = "Ian Desmond Is My Hero." Etc.

<u>IMMM</u>: "I Miss Michael Morse." We all loved The Beast while he was here. Although he hasn’t been very beastly since he left DC, there will always be some fans who believe that the cure for all that ails the Nats is a little Beast Mode.

<u>Kangaroos</u>: Leadoff walks. I … have no idea how this happened. But if a Nats pitcher issues a leadoff walk, the kangaroo shows up in the game thread to punch him upside the head (BIFF! POW!). Fortunately, those never come back to haunt a pitcher, right? Right? We’d all be happier if the Nationals weren’t so gentlemanly about taking advantage of opposing pitchers prone to the kangaroo.

<u>McChatty</u>:  When Nats' pitching coach Steve McCatty strolls out to the mound during a game to proffer helpful advice to a Nats' hurler, this conversation is a "McChatty."  According to some incredibly loud fans at Nats Park, McChatties are brought to you by Federal Baseball Dot Com, a support group for Washington Nationals fans.

<u>Mongoose</u>: Ian Desmond. The Mongoose RAWKS! And if clutch existed, it would look like him, too.

<u>NGU! NS!</u>:  Never Give Up! Never Surrender! Shamelessly stolen from an incredibly funny movie, this phrase comes in handy when the Nats are facing seemingly insurmountable odds. Those situations came up a lot more often in the early years. But even when the Nats cannot come back in any one game, by Grabthar's Hammer and the Sons of the Worvan, the Nats SHALL BE AVENGED!

<u>Offenza</u>: A mythical product that we wish the Nationals could get for their hitters. Offenza is a well-known cure for anything that ails a baseball team's offense.

<u>P2C</u>: Pitch to Contact. A pitching philosophy of not going for strikeouts, but instead pitching to get weak contact from the hitters and keep your pitch count down. Oh, and because strikeouts are fascist.

<u>P2K</u>: Pitch to Strikeout. Because the BABIP Gods can’t hurt you when STRAS STRIKEZ U OWT!

<u>Peaches</u>: Tyler Clippard's other nickname. For his first couple of seasons with the Nationals, Tyler's entrance music was the song Peaches by the Presidents of the United States. Despite the fact that he switched his intro music last year, it's still not uncommon for game threads to riff on the lyrics of this song when Peaches comes into the game.

<u>PBP</u>: Play-By-Play, done on a game thread, for the benefit of those who can't watch or listen through normal means. It's nice to trade off PBP duties, as it requires a lot of fast typing.

<u>PFB</u>: "Pretty Frickin' Bueno": Once upon a time, Nationals' Pitching Coach Steve McCatty used this phrase to describe "Bullpen B" closer Henry Rodriguez's stuff. When HRod is on, he's virtually unhittable. When he's off, mascots better watch their step. Henry is long gone, but the phrase lives on. 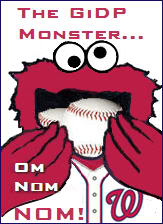 <u>The Red Guy</u>: The Blue Guy's cousin, a red icon of the cookie monster stuffing baseballs into his mouth developed to show the joy and happiness appropriate to the occasion when the Nationals turn a double play. We like The Red Guy. He is stylish, and always a pleasant visitor. Sometimes also referred to as "monster" (in today's GameThread a poster said "here monster monster monster" in a situation where a double play would be very helpful).

<u>RISP Pigs</u>: "Runners In Scoring Position" Pigs. From an icon developed by the sublime MissB to express our frustration when the Nats aren’t able to plate runners in scoring position. We don't like these snoinking pigs, because they prevent the Nationals from hitting with RISP. 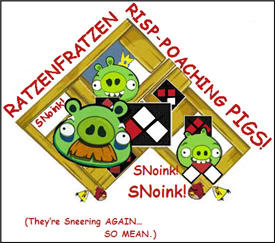 <u>SPAD</u>: Refers to "Speed, Pitching, Athleticism, Defense," a phrase that Nationals' GM Mike Rizzo used before the 2011 season to describe the Nationals' philosophy (and also to explain some of the roster turnover that took place that year).

<u>Strikeout Icons</u>: Each pitcher gets a special icon to maintain their K count in a game. Strasburg’s is a Superman icon; his draftmate Drew Storen’s is a lightning bolt (it’s not a storm warning, it’s a Storen Warning!). Ross Ohlendorf’s is an Admiral (for Admiral Oldendorf, U.S. Navy commander during the WWII battle at Surigao Strait – we have a strong nerd contingent here). Clippard’s is a giraffe because … well … have you seen the guy’s neck? Jordan Zimmermann’s icon is a winky, pointy dog wearing a Wisconsin sweater. Trust us, MissB is magic at coming up with possible icons, and we vote on them in the threads.

<u>WereWerth</u>: Jayson Werth’s nickname. Because, let’s face it, the man has a shaggy lycanthropic visage. But for the last two years he has been totally "Werth IT!" as he has been the most consistent offensive player on the team.

<u>WHMTP</u>: "Would Have Made That Play," used to indicate that the play just botched by some poor player on the field would have been made by a better defender. "RZWHMTP" would stand for "Ryan Zimmerman would have made that play." Often employed in reverse after a defender makes a sparkling play: "ADWNHMTP" for "Adam Dunn would not have made that play."