Introducing Federal Baseball's position-by-position projections for the National League East in 2014! We'll draw on projection systems and some high/low scenarios to figure out which teams are best positioned to win this season, rolling out rankings next week. Join the conversation as we gear up for the upcoming season.

Since the 2014 season is less than nine weeks away, we thought it would be the perfect time to count the season down with an N.L. East position rankings feature. By accounting for upside and downside, the goal is to mesh the gut test with the CPU test to determine which teams are postured for success. Doubtless this isn't a perfect exercise, but nobody's perfect, right?

Here's how it will work. Each week (or more frequently), we'll roll out our position rankings for each N.L. East team, beginning with starting right fielders. I'll use Fangraphs' Fan projection system (located here) to set a baseline, then we'll look at upside -- what the player's value will look like if everything goes right -- and downside -- or, what a poor season would do to projected value.

The various numbers that make up a player's offensive, defensive, base running, and fielding contributions are used to determine how much better a player is than a typical quad-A guy, or replacement player.

I'll use Fangraphs' Wins Above Replacement (WAR) in an attempt to -- don't laugh -- keep things simple.

To understand these values better, here is a quick, probably oversimplified explanation of WAR, step by step. It's easy, I promise. To make it worth your time, I'll try to explain each in one sentence, then reference some values for perspective.

There are two sub-parts to a player's offensive value -- his batting value (using weighted runs above average, or wRAA) and base running value. Offense = wRAA + base running.

A player's batting value tells you how far above or below league average that player is, and is adjusted for park environments but not position (0 is average). This number is driven off of a statistic that is similar to OPS, so usually higher OPS guys will have a higher wRAA.

For perspective, here are some notable batting values for the 140 qualified hitters from 2013:

The standard deviation on wRAA is just about 17, which puts in perspective just how crazy good Miguel Cabrera (and Mike Trout, +61.5, and Chris Davis, +51.4) were on offense in 2013 -- three standard deviations above the ML average.

Here is how Nats' hitters performed, with a 300 plate appearance threshold: 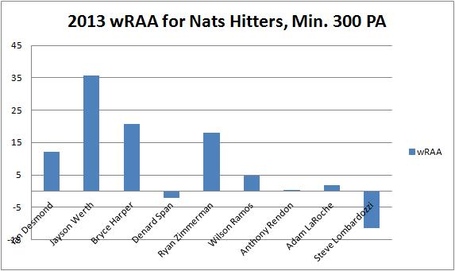 Look, this is nothing you didn't already know: Jayson Werth had a great year; Lombo, not so much; Harper was excellent when he was on the field; and Span nearly graded out at average with a productive back-end of the season.

This value assesses players on whether they go First-to-Third™, tag up, stay out of a force out, or get thrown out trying to take an extra base. In other words, what Bryce Harper does every four times he gets on. It also assigns value to stolen bases and caught stealing.

A base running value of +6 is excellent, 0 is average, and -6 is awful. Here's how the same 140 qualified hitters stacked up:

You'll notice Werth there, right at average. Here is how all Nats with 300 PAs performed: 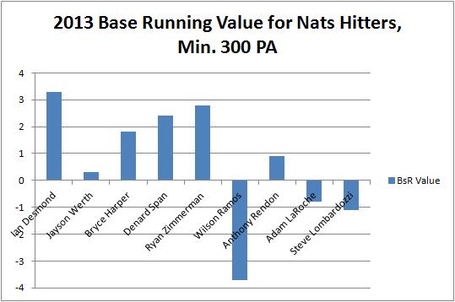 Look, no one ever said buffarhinos (Ramos) are good on the base paths. Mongooses (Desmond), on the other hand, are quite capable.

There are two parts to a player's defensive value: his ultimate zone rating (UZR), and the adjustment he is credited with for playing a particular position. So, defense = UZR + Positional adjustment.

Fangraphs uses UZR to calculate defensive value. For non-pitchers, it's probably the most difficult thing to accurately measure in predictable fashion, for a variety of reasons. Succinctly, it tells us what happened in terms of runs saved or given up in the field.

A gold-glove caliber fielder typically sports a +15 value, average is 0, and -15 is Dunnian.

Here's how the Nats stacked up: 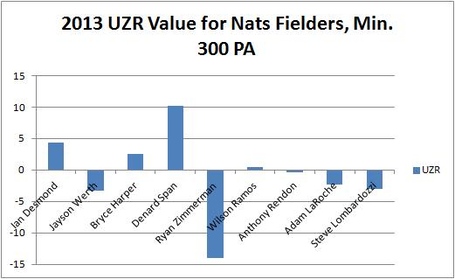 Oddly, the eye test (or at least the opinions I've read around here) seems to confirm some of this. Zimmerman had a poor year, Span is nasty, Desmond is good, and Rendon held his own.

What is the easier position to field, shortstop or first base? If you can answer this question, you already understand the idea behind positional adjustment.

This concept seeks to credit players who play challenging defensive positions to put them on equal footing with players who don't, since UZR doesn't take positional difficulty. These values are also scaled to match games played at a position to appropriately account for players who play multiple positions.

You'll notice the values detailed above revolve around 0 and are greater for larger parts of the game: Batting and UZR are emphasized, while base running has less of an effect. Here are Fangraphs' positional adjustment values:

Makes sense, I think. Outfield corners are generally regarded as easier defensive positions to play, as is first base (and of course, designated hitter).

That's the notion behind replacement value: For every extra at bat Desmond receives rather than a replacement player, the Mongoose brings more value to the team.

The replacement value bar is set at +20 runs for 600 PAs. Get more than 600, and you earn a replacement value greater than +20 -- for example, 700 PA earns a +23.3 run value (for the mathematically inclined, the formula is 20/600*PA). So, as we move through the series, think about injury proneness and adjust expectations accordingly.

Once we have totaled offense, defense, and replacement level, we divide by 10 to determine WAR.

Why divide by 10? This is because Fangraphs' scale assigns 10 runs to a "win" above what the typical replacement player would provide. For most major leaguers, a WAR value of +3 or higher is a pretty good accomplishment. Higher than that, and you get into All Star and MVP category.

WAR isn't perfect, and there's still value in looking at traditional metrics. So we'll use those, too. We hope the series is able to provide some discussion and distraction from the wait for the start of the season.