Stephen Strasburg On Rehab After Elbow Surgery: "If Anything I've Just Put In More Work This Offseason."

Washington Nationals' right-hander Stephen Strasburg had surgery to remove loose bodies from his right elbow as soon as the 2013 season ended, and he told reporters last weekend that he should be 100% and ready to go at the start of Spring Training.

Share All sharing options for: Stephen Strasburg On Rehab After Elbow Surgery: "If Anything I've Just Put In More Work This Offseason."

In his final assessment of 25-year-old, '09 no.1 overall pick Stephen Strasburg's fourth major league season with the Washington Nationals, outgoing manager Davey Johnson said he wished that the right-hander would have gotten to .500 on the year, though Johnson noted that the pitcher's win/loss record was misleading.

"I love having [Steve McCatty] there in my corner and I think a lot of guys in the rotation will say the same. He's the type of guy that you can trust." - Stephen Strasburg on Nats' pitching coach Steve McCatty

"A bunch of times, didn't score any runs," the 70-year-old skipper said, "or one run or two runs. His numbers are indicative that he should have won 15 ballgames, at least."

"There's a few things that he could do better," Johnson told reporters. "He knows what they are. He's a little too regular still at times, but he's made improvements. He's getting to be the complete pitcher. He's awfully good as it is, but there's still more room in there for improvement." Strasburg grew and matured as a pitcher, his manager explained, and put himself in a good place heading into his fifth MLB campaign.

"He's much calmer," Johnson said, "and he's not letting the little things bother him and he's right where he needs to be."

Heading into Spring Training and the 2014 campaign, Strasburg told reporters last weekend at NatsFest at the Gaylord Resort and Convention Center in National Harbor, MD, that he knows what he's got to work on to prepare for the new season.

"It's kind of just something that happened. I'm not going to change the way I go out there and approach the game." - Stephen Strasburg on loose bodies in his elbow

Strasburg had surgery to remove loose bodies from his right elbow after the 2013 campaign ended, and he said last Saturday that it shouldn't interfere at all with his preparation. "Everything that I hear and everything that I'm expecting is that it's normal," Strasburg said. "I feel great, doing my normal offseason routine and I don't feel like there's any reason why I should be held back if I'm feeling good come Spring Training."

"The rehab time was six weeks," he explained. "So when I was over there doing the physical therapy and the strengthening of it and the flexibility aspect, I wouldn't have been doing anything anyway, so if anything I've just put in more work this offseason."

The right-hander dismissed the idea that he succeeded last season in spite of the issues with his elbow and would have been even better if not for the loose bodies, telling reporters that it snuck up on him. 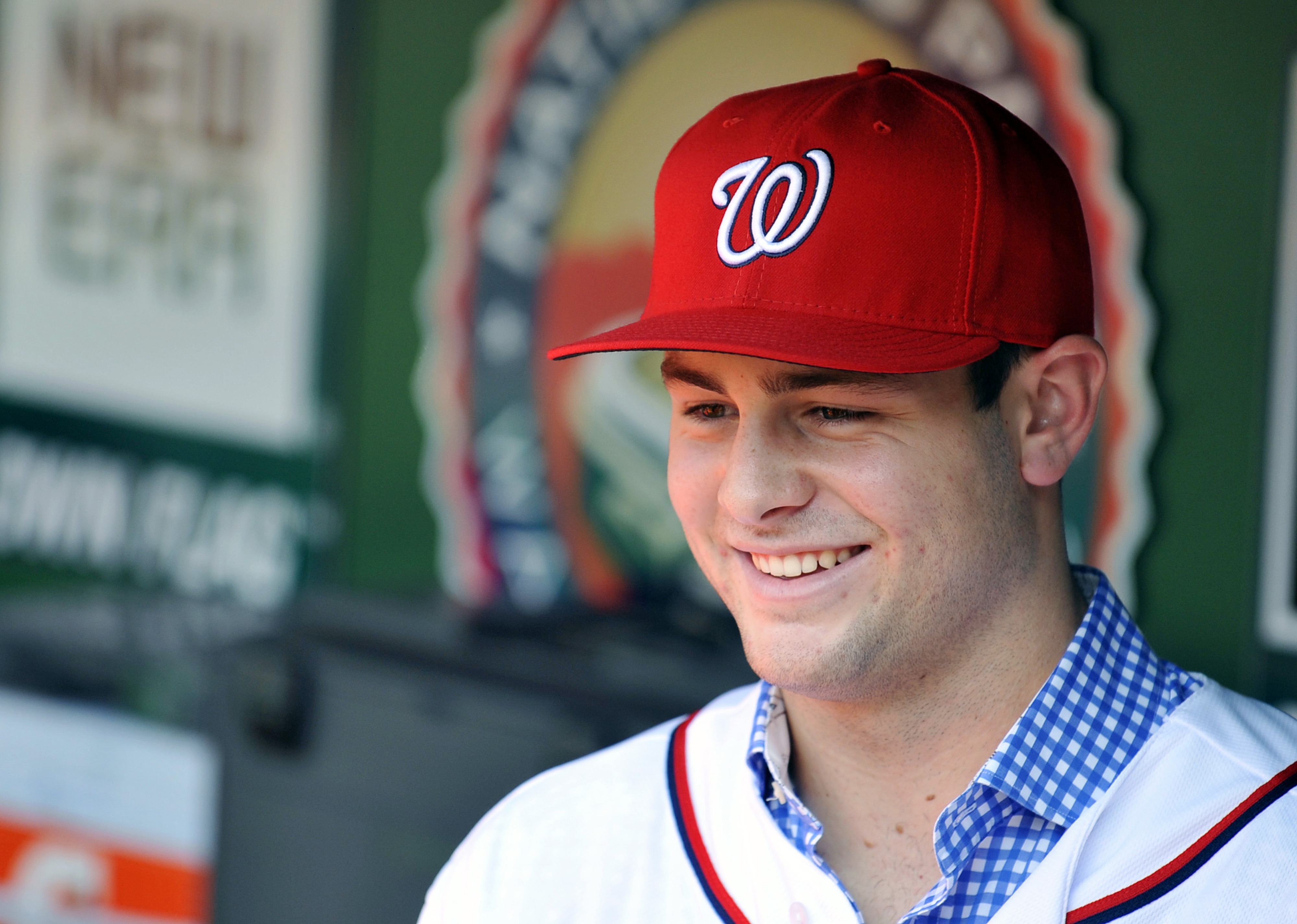 "I guess at the time I didn't know what it was," Strasburg said. "It just kind of slowly crept up and then I just couldn't straighten my arm out as much." It didn't affect him on the mound in his mind.

"It wasn't so much when I would go out there and pitch in a game," he said, "but the way loose bodies work is that when you get hot and you get the blood flow, your arm straightens out and you feel normal. But it was really like the day after, trying to play catch and trying to throw a bullpen and stuff is where it became a little difficult trying to get my arm and my elbow back and flexible because of loose bodies in there. But there wasn't really a game out there where I really feel like it affected my pitching."

With the elbow problems behind him, Strasburg is ready to get the 2014 season started.

"I feel great," he said. "Normal schedule. Doing my throwing, lifting, running, the whole shebang. Just kind of getting ready for Spring Training. No problems."