Can the Nationals and Jordan Zimmermann Agree on an Extension?

Two years of team control before free agency. Slow-moving negotiations on a long-term deal. Sound familiar? Jordan Zimmermann finds himself in a situation similar to the ones David Price and Jeff Samardzija are in, so why isn't anyone talking about Zimmermann getting dealt... What? THEY ARE???

Share All sharing options for: Can the Nationals and Jordan Zimmermann Agree on an Extension?

Quoting Washington Nationals' GM Mike Rizzo in a recent article on the work the general manager has done to improve the Nats' roster this winter, veteran Washington Post columnist Thomas Boswell wrote that the Nationals, "'don’t plan to be a player' in the competition for Japanese star Masahiro Tanaka, Rizzo says, even though the Nats’ guesstimate his total cost might be $120 million, a range at which they could compete."

"Before he was a prototypical power pitcher. Fastball, hard slider. Not a lot of distinction between the velocities of the pitches [and] now he's incorporated a changeup and a curve ball, slider and the fastball..." - Mike Rizzo on Jordan Zimmermann on 106.7 the FAN, May 2013

Instead of spending that money on a free agent, "they prefer to concentrate on 'taking care of our own guys,'" Boswell wrote, "trying to get extensions done for Jordan Zimmermann and Ian Desmond."

"'Those long-term contracts, you really have to know that personality and the track record and the history," Rizzo told reporters at the Winter Meetings, as the WaPost's James Wagner reported. "I think that makes it easier to give guys longer-term contracts that you know than guys you’re going out in the free agent market and that you don’t know as well.'"

Asked about extending Zimmermann in particular by FOXSports.com's Ken Rosenthal, the Nats' GM said they would love to get a deal done with the '07 2nd Round pick who has developed into one of the game's more reliable starters. Zimmermann, who avoided arbitration and signed a 1-year/$5.35M deal last winter, has two years of team control left before he hits free agency if no extension is agreed upon:

"I think that it's hard for hitters to sit hard on Zim now, because he has two pitches that the velocities are much slower than his hard stuff. I think that's a big part of it. - Mike Rizzo on 106.7 the FAN In D.C. On Jordan Zimmermann

"'We’d certainly love to get something done with him. But like any premium guy on your team, if … there is something that can’t be done, then you would think about a trade. But that’s the furthest thing from our minds.'"

Asked about the continuing discussions this past August, Zimmermann told MLB.com's Bill Ladson he would like to get a long-term extension done if it's a fair deal:

"'It would be nice to stay long term, but it has to be something fair. I'm just not going to do a team-friendly deal just to stay here long term. If it's a fair deal, then obviously, we'll definitely think about it. But I'm not going to give a huge team discount. Just something fair is all I ask.'"

Both sides have remained open to a deal, but as Zimmermann told MLB.com's Mr. Ladson this past summer and said again in a mid-December conversation with the Washington Post's James Wagner, he doesn't want to negotiate in-season, so things would have to happen sooner rather than later.

"'If we’re going to do something, we’re going to have to start talking a lot earlier than we did last winter,'" the 27-year-old right-hander told the WaPost reporter, but as of the time of the interview, the previous offers were not what the pitcher and his agent were looking for and talks hadn't begun yet this winter:

"'That’s the way it kind of played out so far. A lot of people get the impression I’m trying to break the bank and get a boatload of money. I want a fair deal. I don’t want something team-friendly. I want to get paid my value.'"

Washington Post writer Adam Kilgore, in a Q&A with readers this week, threw out a "hard-to-fathom but interesting-to-consider scenario" he said clearly was not going to happen. What if the Nationals signed Masahiro Tanaka and then traded Zimmermann (whose two years of team control would be just as valuable to other teams as Doug Fister's were to the Nats when they acquired him Detroit last month)?"The Nats may have to trade Zimmermann next winter if they cannot sign him to an extension," Kilgore wrote, so, "...why not circumvent that AND get more value for Zimmermann while he’s got two years remaining?"

The WaPost reporter isn't the only one considering the possibility of the Nationals trading Zimmermann if they can't work out an extension, however. FOXSports.com's Ken Rosenthal returned to the idea in an article this morning in which he writes about the Cubs' Jeff Samardzija and the Rays' David Price, both of whom are in the same situation as Zimmermann with two years of club control remaining. Samardzija and Price, "...remain trade possibilities," Rosenthal writes. "At least one more, the Nationals’ Jordan Zimmermann, could join them."

"The Rays maintain too low a payroll to sign Price long term," the bow-tied reporter notes, "but Samardzija and Zimmermann could prove to be examples of players who simply did not want extensions." 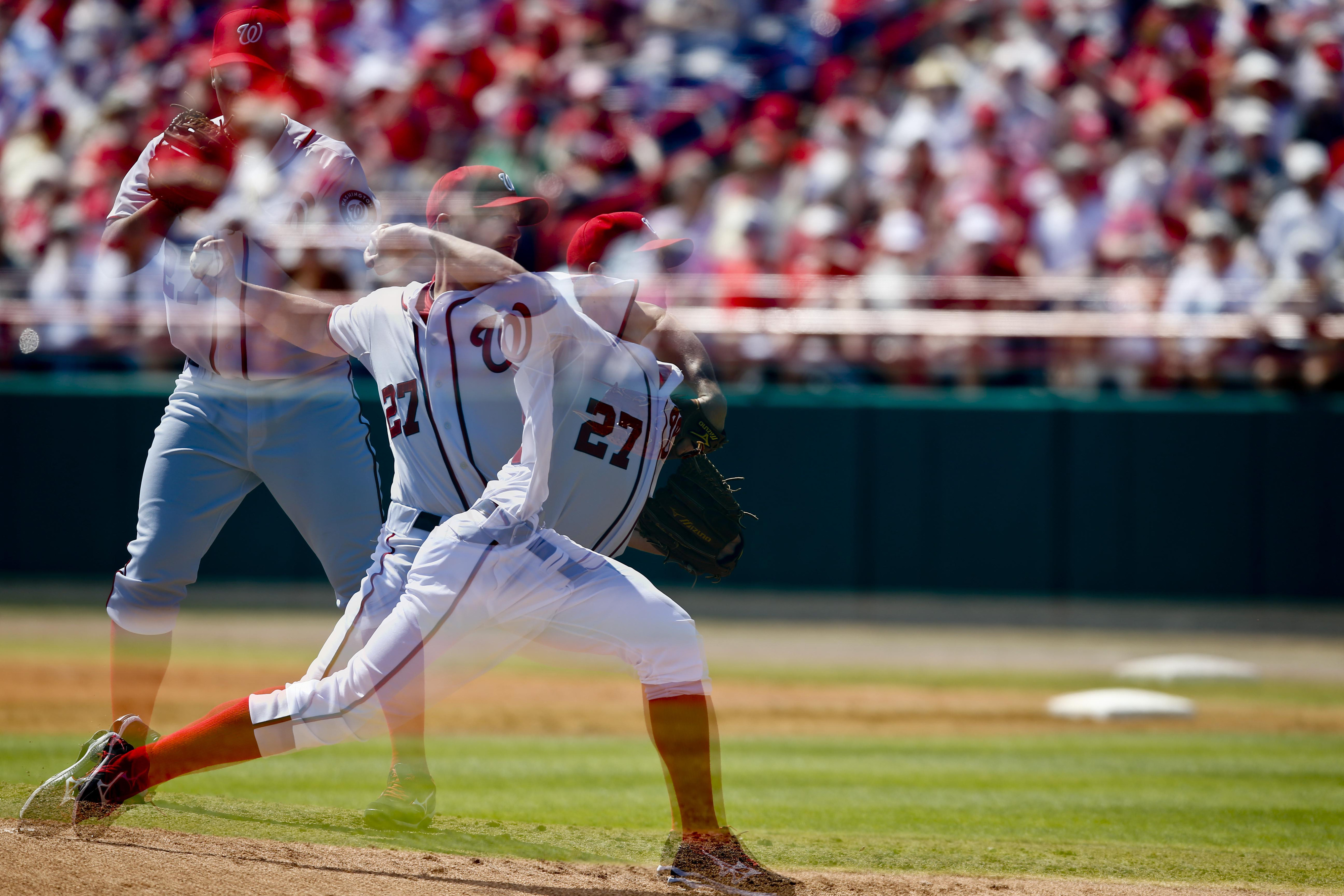