Nationals' Cult Favorites: Who Will Be The Next?

Fans in the nation's capital latch onto players sometimes. Michael Morse hit his way into fans hearts during his time in Washington. Nationals' outfielder Nyjer Morgan was a favorite for a while. Roger Bernadina had the entire crowd "chomping" with their arms... Who's the next cult favorite?

Share All sharing options for: Nationals' Cult Favorites: Who Will Be The Next?

It certainly helped his popularity with fans that Michael Morse put up a .295/.353/.536 line with 51 doubles and 49 HRs in 923 plate appearances in his first three years in the nation's capital from 2009-2011. When the Nationals made their first legit run at a postseason appearance in 2012, Morse, who missed time early with a lat strain and started his major league season in June that year, posted a .291/.321/.470 line with 17 doubles and 18 HRs in 430 PAs. With his outgoing personality, Twitter account, sing-along walk-up song and power, Morse quickly became one of the most popular players in Washington, D.C.

"And Michael with one year left of control only, we felt that we had an ample substitute in a more-controllable Tyler Moore..." - Mike Rizzo on deciding to trade Michael Morse

The Nats decided to re-sign Adam LaRoche last winter, however, and with up-and-comer Tyler Moore on the roster as a right-handed backup at first, as GM Mike Rizzo put it, there was redundancy. So the Nationals traded Morse to the Mariners in a three-team deal that included the A's. Moore and Morse, Rizzo said, "...have very similar skill sets and to have two of them is almost redundant. And Michael with one year left of control only, we felt that we had an ample substitute in a more-controllable Tyler Moore and we figured that with the outlay of prospects to get the club that we have, we felt that Mike would recoup some of those prospects for us. Especially with the trade of Alex Meyer to obtain Denard Span, we felt that A.J. Cole kind of replaces his spot in our minor league system."

The Nats also got Ian Krol (who was dealt to Detroit in the Doug Fister deal this winter after making his MLB debut with the Nationals last summer) and RHP Blake Treinin from Oakland in the trade that sent Morse to Seattle.

There was a certain segment of the Nats' fanbase that didn't want to hear any reasonable explanations for why Morse was dealt, and in spite of the fact that the Nationals kept Morse's "Take on Me" walk-up song as part of the seventh-inning stretch, there were calls for the Nats to somehow get the 1B/OF back throughout the 2013 season and into the winter before he signed a 1-year/$6M deal with the San Francisco Giants.

Then there was the Shark, outfielder Roger Bernadina, whose cult celebrity in D.C. started with a nickname that required explanation. Crowd shots of fans in Nationals Park chomping with their arms for Bernadina during the nationally-televised games in the NLDS with St. Louis in 2012 probably confused baseball fans around the country.

Bernadina too saw his popularity explode as he put up a .291/.372/.405 line coming off the bench in Washington during the Nationals' run at the NL East crown. In 2013, however, the 29-year-old outfielder struggled in the same role and was eventually released by the Nats in mid-August. There's no word yet on how the team will work the "Shark" chomp into the 2014 in-game experience.

Were there any other cult favorite Nationals? We only started following the team in 2012 -- (ed. note - "We've actually written about the team since 2006 and followed the franchise since it was the Expos, we're humoring Braves fans who think no Nats fan existed before 2012.") -- so not too many cult favorites come to mind. Nyjer Morgan? Or Tony Plush? He was big for a short time. Chad Cordero, the flat-brimmed closer is still loved by Nationals fans years after he last closed a game for the Nats. Anyone else? Does big reliever Todd Coffey (who sprinted from the bullpen) count as a cult favorite?

Who will be the next cult favorite in NatsTown? Jerry Blevins (who filled a serious hole in the Nationals' 'pen) got off to a good start with Nats fans online with his homemade uniform:

I needed to update my avi without notice. I think it was a seamless transition. pic.twitter.com/yLXkWlh6Jn

Denard Span? When he went on his 29-game hit streak this past season, anyone who wasn't already enamored with his defense began to warm to the outfielder whose success at the top of the lineup coincided with the Nationals' push for a return to the postseason late last summer. He's got a Twitter account, which seems to be a key to attaining cult favorite status. 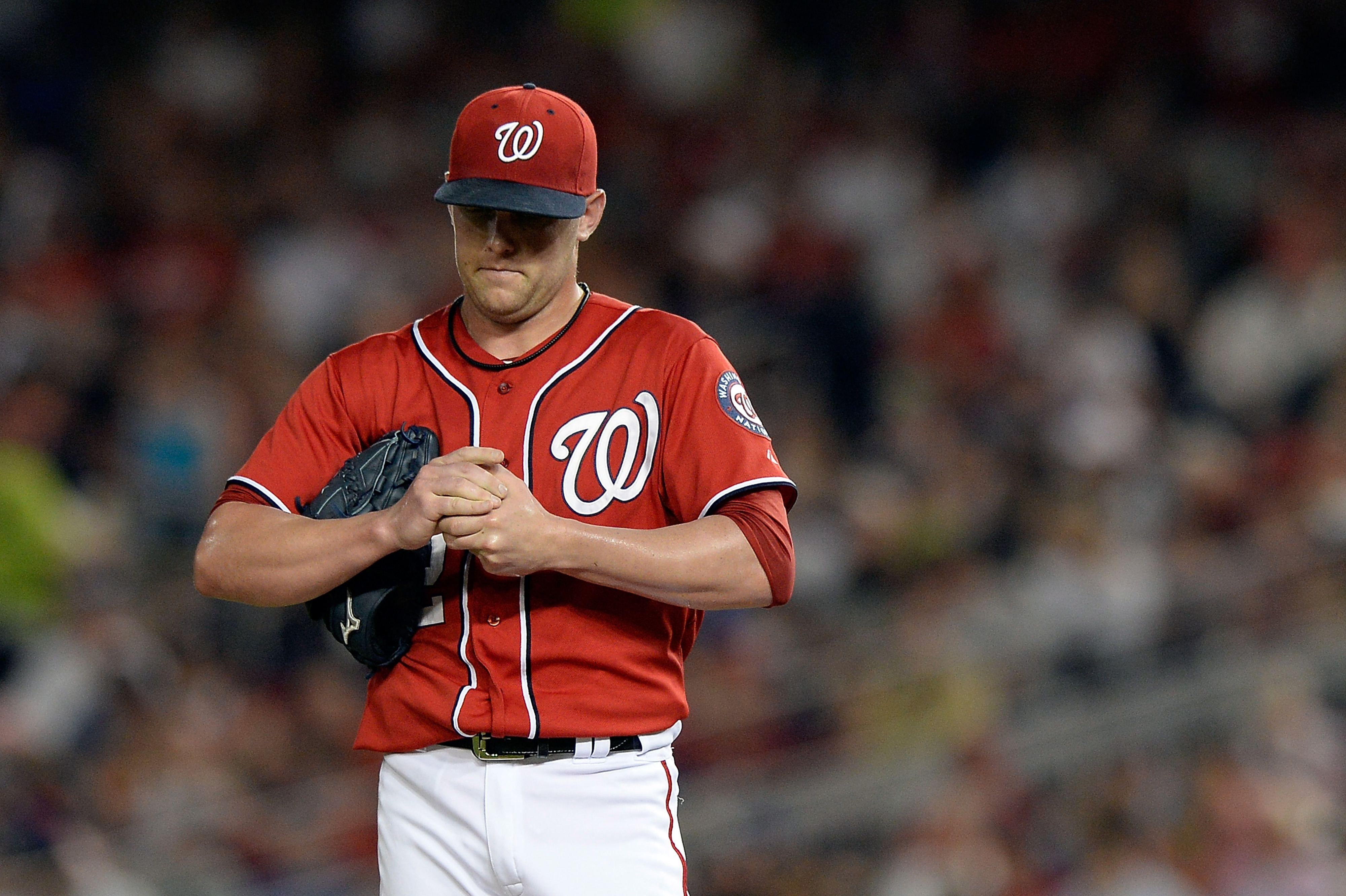 A large segment of fans in the nation's capital want to see Drew Storen wrestle the closer's role away from Rafael Soriano and earn some sort of redemption in the postseason. What if Soriano leads the charge and people start untucking their jerseys again along with him when he saves a game? Stephen Strasburg's too big a star to be a cult hero, right? But he could become one by continuing to be an anti-hero who rejects his celebrity status (and doesn't really like the press according to pitching coach Steve McCatty). Will fans rally behind the anti-establishment candidate if he continues to dominate opposing hitters and leads the rotation in 2014?

Bryce Harper's too big a star to be a cult favorite too.

Does Nate McLouth have a personality? Can Tyler Moore hit his way into the hearts of Nationals fans?

Who's going to be the next cult favorite in the nation's capital?

(ed. note - "Someone just mentioned Steve Lombardozzi as a cult favorite in the comments. How did I forget about the powerful #LomboLobby.")

(ed. note - "And now someone mentions Wil Nieves. Wil who? How did I forget him. I think I even wrote about him as a cult hero once...")