Can the Nationals rely on Ryan Zimmerman at first in 2015? Who plays first if Zim's injured?

So, if Adam LaRoche moves on from the Washington Nationals, and Ryan Zimmerman takes over at first... what happens if Zim struggles to stay on the field again next season? Can the Nats rely on the oft-injured infielder?

Share All sharing options for: Can the Nationals rely on Ryan Zimmerman at first in 2015? Who plays first if Zim's injured?

Just moments after the the end of the Washington Nationals' 2014 season, first baseman Adam LaRoche was asked what the immediate future held for him?

"I will do nothing. I have no idea what direction we go from here, but I know I'll go sit in a tree stand and think about it." -Adam LaRoche on plans for immediate future after 2014 campaign ended

"I will do nothing," LaRoche said after Game 4 of the NLDS in AT&T Park. "I have no idea what direction we go from here, but I know I'll go sit in a tree stand and think about it."

"It usually clears up a lot of things, doesn't it?" a reporter asked.

"It sure does," LaRoche said.

What "seems" clear, and what the 34-year-old first baseman has acknowledged, is that his time in the nation's capital has come to an end.

In an post-elimination article last week LaRoche said as much, telling the Washington Post's Adam Kilgore that in his mind it all depends on the direction the Nationals take with Ryan Zimmerman:

"[W]e just have to see what they’re going to do with Zim. I think that’s probably what it will come down to. He’s our best hitter. He needs to be in the lineup. If he needs to move over to first to make that possible, then that kind of weeds me out, and I move on. Which is fine. It’s not the first time I moved to a different team."

Can the Nationals rely on Zimmerman though?

While dealing with thumb and hamstring injuries, the Nationals' recently-turned-30-year-old infielder, who has dealt with serious shoulder/throwing issues for several seasons now, was limited to just 64 games this season.

Who plays first next season if LaRoche is gone and Zimmerman can't stay on the field?

FBB's Jim Meyerriecks looked at the in-house options in his post on potentially picking up LaRoche's option for 2015.

Tyler Moore? The 27-going-on-28-year-old infielder/outfielder made 17 starts at first this season.

Matt Skole, the 25-year-old, 2011 5th Round pick out of Georgia Tech, was the highest ranked first baseman in the organization on Baseball America's list of the Nationals' Top 10 prospects heading into the 2014 campaign.

Steven Souza, Jr. the Nationals' Minor League Player of the Year for 2014, played a full season at first base... in 2011 at High-A Potomac.

Someone is sure to say "Jayson Werth" too. Maybe one day, but next season?

Can the Nats, who are expected to contend for another postseason berth, take the risk of having to rely on any of the three top first base options if Zimmerman can't stay on the field?

If they plan on going with Zimmerman at first next season do they have to find a potential everyday replacement at first who is capable of filling in and producing if necessary?

Last we saw Zimmerman at first, he came on as a defensive replacement at first base in the next-to-last game of the regular season. In the top of the ninth, with the Nationals up 5-0 on the Miami Marlins, Drew Storen gave up back-to-back one-out singles, but induced a grounder to first off Enrique Hernandez's bat that could have started a game-ending DP.

Will the 2015 campaign be Jordan Zimmermann's last with the Nationals? 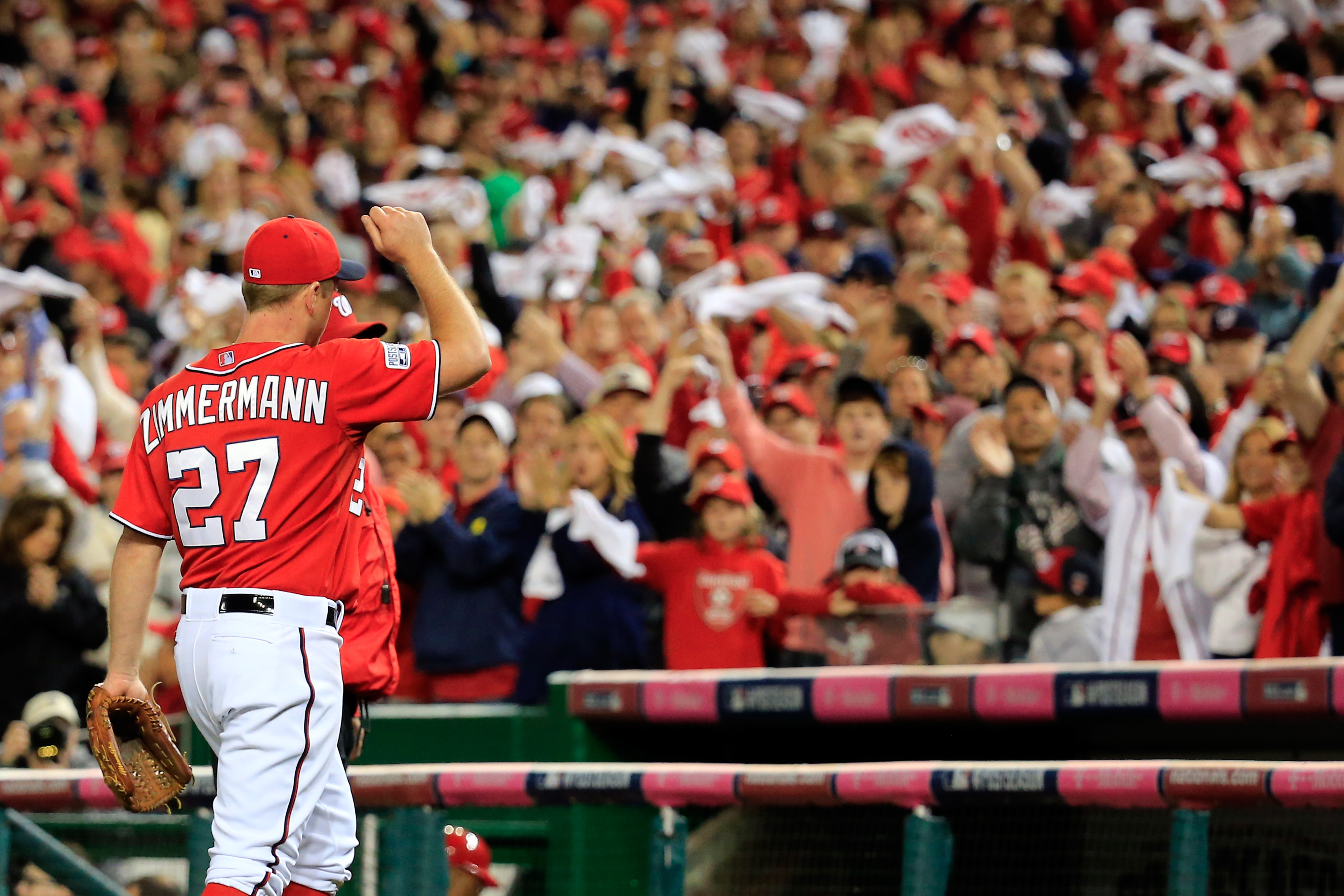 Zimmerman approached the spinning ball as if he was going to go to second to start a double play, but had the ball bounce off the flat side of his first baseman's glove.

"It's funky spin," Nats' skipper Matt Williams said. "You have all the time in the world and it's bouncing all over the place, and jumping all over the place. It's not easy and it just came up and hit his heel. I've seen a lot of those from the other side at third, they're not fun, because you don't know which direction it's going to go."

Zimmerman has seen plenty of them from the left side of the diamond too, but he still hasn't seen too many at first base. Is he ready for an everyday role at first base?