Jordan Zimmermann was sure Christian Yelich had earned extra bases: "'Double,'" was his first thought he told reporters after game. "No-doubt double.'" But Washington Nationals' outfielder Steven Souza made the catch of the year....

[ed. note - "As of this moment, we have published a total of 1,561 stories in 2014. We know you can't read them all, so we spent the last twenty-four hours going back through those stories to pick out our five favorite articles of the year. We'll publish the top five stories over the next few hours, so keep checking back. Our top story? I really don't think it gets any better than Garrett Hooe's breakdown of the catch Steven Souza made to save Jordan Zimmermann's no-hitter. You won't see anything like this anywhere else. Bonus: We finally found and removed the offending code which broke the comments section, so you can comment now and tell Garrett how good this is."]

There's so much to unpack from Jordan Zimmermann's incredible, awesome, pretty-freakin'-bueno no-hitter to close out the 2014 regular season against the Miami Marlins. As Zimmermann himself said, the fifth inning featured three rockets off the Marlins' hitters' bats.  It was only after that point that he knew something special was in the works.

But I'm going to doubt him for just a second. Because even he shows some, um, doubt as Christian Yelich smoked a high fly ball to left-center with two down in the bottom of the ninth:

And he owned it! After the game, and as Patrick noted, Zimmermann was sure Yelich had earned extra bases:  "'Double,'" was his first thought. "No-doubt double.'"

Also, one of the millions of reasons baseball is cool can be seen in the background.  Look at all the fans standing--and, right after contact, the collective "ohhhh...."  Several fans bring their hands to their heads (see upper left), a couple bounce up and down with nerves or anticipation or regret for failing to use the restroom out of superstition (middle right), and others don't even know what to do (everyone in the first row).

Anyway, hard not to believe Zimmermann, isn't it? But maybe it was because of that fifth inning feeling that he -- and nearly 40,000 other fans in attendance and many more watching on T.V. -- knew things would work out all right. And, like so much has during second half of the Nationals' season this year, they did.

It's not to take anything away from Zimmermann's performance -- a retrospective like the epic Dodger game earlier this season is certain in the offing -- but I thought it might be fun to break down Souza's grab while baseball for the Nats waits until Friday. Exactly how far did Souza have to go, and how fast was he going on his charge across the left-center gap?

While this would be a lot easier with FieldF/X, the best thing we've got is FederalBaseballF/X, an amalgamation of assumptions and shady math with hints of objectivity no stronger than the Padres' postseason chances. It's time to get Zapruderian.

We've got to know where Souza started the play before we can figure out how far he went. In a stroke of incredibly good fortune, someone had a phone that recorded video at the game Sunday, and on top of that, shows pretty clearly where Souza was playing. From YouTube user "Dude Perfect Jr. 1" comes this excellent video. If you jump ahead to the :40 second mark, you'll see the D.C. left fielder's positioning right before contact:

If you expand the screen (or even if you don't), you can see that the grounds crew cuts the field in a checkerboard pattern. That's awesome for many reasons, including for helping to determine where Souza started.  By my count, he has his right foot on the 10th column in from the foul line, with his left foot in the 11th.

Depth from the infield is a little bit more difficult, and a brief search didn't turn up much in the way of conclusive proof.  However, just further to the right of the foul line is the left-field indentation (right behind where the ball girl is located in the linked picture), where the seating area juts out to just a few feet from fair territory. That's a good sense of depth, and it makes sense that left fielders might use that as a distance marker. A brief check of distances shows the left field wall is marked at 336 feet from the plate, and the indentation is about 270-280 feet down the line.

Thanks to Runningmap.com, we can plot Souza's starting point to begin our distance and speed lark. And wouldn't you know it, but the satellite image for distance ALSO has the same field patterns as above. Reliable? Maybe!

Here's where I figure Souza started from; 10-11 columns in, and a little behind the corner of the indent to be conservative: 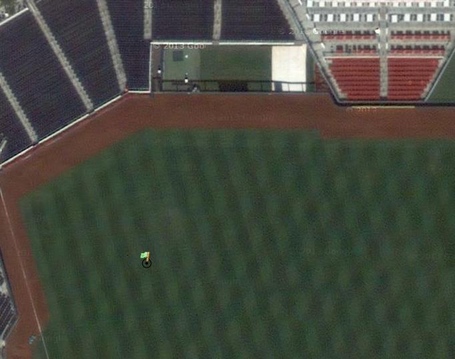 How about where Souza finished? This is more difficult, but we're really only approximating anyway. He clearly covered a ton of ground. By my guess, he ended up about a dozen or so feet in front of the fence, just to the left (in the image below) of the left-center gap marker. 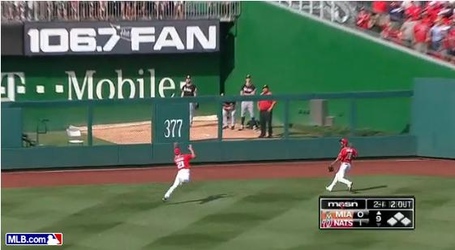 Souza is close to the warning track, but not quite there.  Here's another angle, captured in a still on Monisrocks1995's YouTube video: 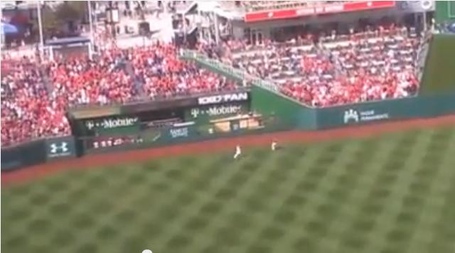 He's crossed in front of and gone beyond the Sam Adams sign at this point, but hasn't made it to the 377 mark in left-center. For the sake of argument, we'll call him about 7 feet short of the track, at about the bar in between the Sam Adams sign and the 377 marker, or right in front of the white chair in the image of Souza's catch above (this is truly getting ridiculous).

Here is what we end up with using these starting and ending points. Note we can sort of tell where the middle wall pylon is because of the narrow shadow -- which isn't too long -- just to the left of the white tarp. Certainly not exact science, but our measurement tells us that Souza ran roughly .022 miles, or about 116 feet: 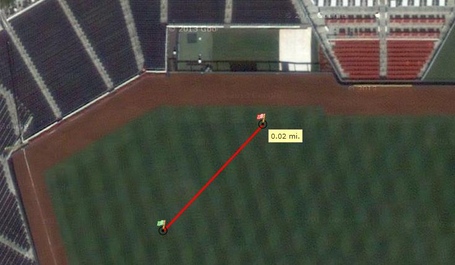 The last thing we need to know is how long it took the rookie left fielder to get from start to finish. It's still pretty inexact here, of course, but I timed around 4.25 seconds over four times (well, 4.21, 4.23, 4.23, and 4.22, but being conservative) using the below video:

It's just a matter of math if you accept those numbers as good enough.

One-hundred sixteen feet in 4.25 seconds is about 18.6 miles per hour, to put it in terms that we deal with every day. Not comfortable with the distance? I've plugged in some other approximations to give a range, shown below: 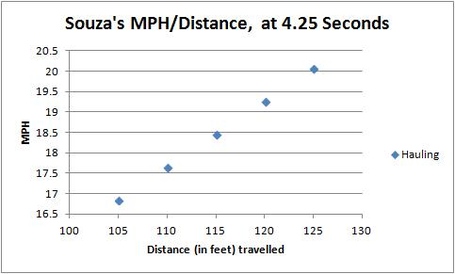 The time from crack of the bat and catch may change, too, and we can account for that by using some other assumptions. The chart below shows different times, assuming a 116 foot trek from start to finish:

Even assuming the worst of our assumptions -- 4.35 seconds to cover 105 feet -- Souza would have been going fast enough to get a speeding ticket in most strip mall parking lots (16.45 MPH). For perspective, Usain Bolt owns the fastest average miles per hour for any human, and he checked in at 27.44 MPH. In sports having a common reference to baseball, Souza's ~18.5 MPH pace would have him at roughly a 4.42 second forty yard dash time. That's really quick, but for a young and talented athlete like Souza, that might well be about right. Further support for this can be found in Baseball America, which noted his speed profile earlier this year.

Well, plenty were mentioned above. But there's another worth mentioning: did Souza actually run further than the distance we gave him credit for? Probably -- rarely are outfielders' routes perfect. In fact, from Dude Perfect's YouTube, you can see his initial three or so steps are to his left, rather than left and back:

So, you can probably bump him up a little on the speed, or not if you're suspect of some of the other figures. Also, what an incredible jump -- I almost feel like docking him by starting the time BEFORE Yelich actually made contact.  Seriously, though, he's moving before the infielders and Zimmermann even turn around, showing some incredible awareness and I-gotta-[expletive]-get-going-ness. If you like, you could also quibble over starting the clock at contact.

We've gone an entire article without actually seeing the catch. So many great images have made the rounds, it's hard to go with just one. So I didn't; instead, let your imagination do the work as Charlie Slowes' pipes take you to euphoria. [ed. note - "We had to insert a video featuring several calls since the original audio clip inserted here broke the internets or at least the comment section below."]:

[second ed. note- "Here's the full .gif of the catch from the left field seats"]: