Will Asdrubal Cabrera's deal in Tampa Bay lead to the Rays dealing Ben Zobrist? Will the Washington Nationals attempt to trade for the veteran infielder if he is made available? Will Danny Espinosa end up starting at second on Opening Day in 2015?

As soon as the news of Asdrubal Cabrera's one-year deal with the Tampa Bay Rays broke, the questions began.

"So... does this mean Ben Zobrist is available?"

In spite of the fact that Rays' President of Baseball Operations Matt Silverman told MLB Network Radio recently that Zobrist was one of the "most valuable" players in the majors and a bargain at $7.5M after the team picked up his option for 2015, the prevailing wisdom on the internet on Tuesday was that the 33-year-old, infielder/outfielder who put up a .272/.354/.395 line in a +5.7 fWAR campaign in 2014, would be dealt before Opening Day:

Will be interesting to see what #Rays do next. They are open to trading Zobrist and/or Yunel Escobar.

Zobrist biggest impact position player remaining in trade or free agency. #Rays will do what they do and move him if they get right deal.

#Nationals already have best 1-to-25 roster in MLB. Only soft spot 2b. Zobrist would probably make them strong WS faves

As the Washington Post's James Wagner noted in an article on the possibility of the Nationals trading for Zobrist now that Cabrera has signed in Tampa Bay, dealing for a player with one year of control left is not Nats' GM Mike Rizzo M.O., but with second base an obvious need for the Nationals in 2015, that WaPost writer suggested that Washington might pursue a trade for the veteran, though he added that the Nationals, "... sensed, around the time of the winter meetings, that it would be too difficult to pry him away from the Rays."

Veteran reporter Peter Gammons reported recently that "several GMs" he spoke to believed the San Francisco Giants "are going to trade prospects for" Zobrist at some point this winter, and as MLBTradeRumors.com's Steve Adams noted yesterday, a case could be made for half of the teams in the majors making a push for Zobrist.

Baseball America's Ben Badler threw out another possibility for the Nationals' second base needs last week when he mentioned Washington as a potential suitor for Cuban second baseman Hector Olivera, described by the BA writer as the "best Cuban player out there" this winter after 19-year-old switch-hitting infielder Yoan Moncada.

"The Nationals are one of the best teams in the game and have few holes on their roster, but second base is one spot they can enhance," Badler wrote, and Olivera, who is 29-going-on-30, and put up a ".316/.412/.474 with seven home runs, 38 walks and 25 strikeouts in 273 [PA's]," in 2013-14, could make sense for Washington though he's missed significant time in the past few seasons while dealing with a blood disorder, which was "... reported by the Cuban press as thrombosis in his left biceps."

Anthony Rendon put himself on the map in 2014 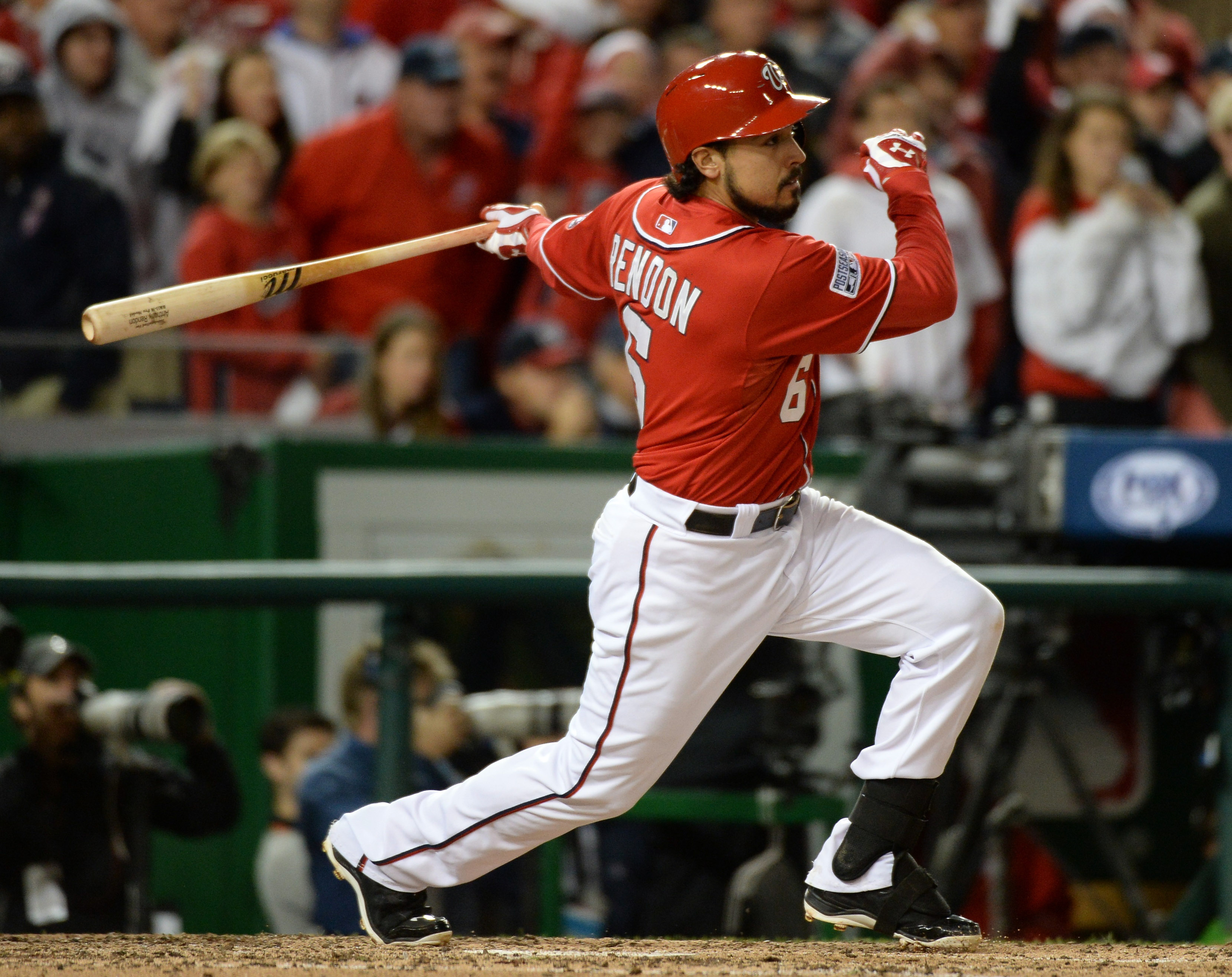 The Nats have reportedly expressed interest in Moncada and fellow Cuban infielder Jose Fernandez this winter as well, with the WaPost's Wagner writing in November that the Nationals scouted Moncada, Fernandez and Olivera, but, "have been most interested in Fernandez and Moncada," with the 19-year-old Moncada likely the best fit for their needs.

Of course... the Nationals could always just stick with Danny Espinosa at second base with Dan Uggla, Ian Stewart and even Kevin Frandsen (who campaigned for the spot during NatFest) already in the organization. Or they could move Anthony Rendon back to second base and pursue a third baseman... or promote Wilmer Difo way too early and hope for the best?

Here's hoping the Nationals find their second or third baseman soon so all this speculation ends at some point early in the new year...