Will the Washington Nationals really go with Sandy Leon, Jhonatan Solano or Chris Snyder behind Wilson Ramos? And what if one or more of the catchers gets hurt? Can Ramos make if through a full season for the first time in three seasons? Who backs Ramos up?

As Washington Nationals' GM Mike Rizzo broke it down in a conversation with reporters at the Winter Meetings in December, the Nats expect catcher Wilson Ramos to play 125-128 games in 2014 and they believe either Sandy Leon or Jhonatan Solano can handle the remaining games.

"If a backup catcher that fits what we're trying to do were to become available, we certainly would look into it." - Mike Rizzo on state of Nats' catching search

"'The question comes in: If Wilson were to get hurt for an extended period of time, can they handle the load?'" Rizzo asked rhetorically, as quoted by NatsInsider.com's Mark Zuckerman. "'Going into spring training right now, we’re comfortable with what we have.'"

The Nationals have continued to sign veteran backstops, however, including Chris Snyder, and according to several reports, are still in the market for a catcher who could play every day if some sort of injury were to cause Ramos to miss significant time for the third straight season.

Washington Post columnist Thomas Boswell reported that the Nationals had interest in then-Cincinnati Reds' catcher Ryan Hanigan before he was dealt to Tampa Bay. Several sources have reported an interest in Rays' catcher Jose Lobaton on the Nationals' behalf. Rizzo, as he did at the Winter Meetings, told reporters last month at NatsFest that though the Nats were comfortable with their in-house options they remained open to upgrades that made sense.

"He don't want no rest. All through this he's been hitting the heck out of the ball, catching good, throwing people out. He's hard to take out of the lineup." - Davey Johnson on Wilson Ramos in late 2013

"We're looking for value wherever we can find it," Rizzo said. "If a backup catcher that fits what we're trying to do were to become available, we certainly would look into it. We like the pack of guys that are going to compete for it, [Jhonatan] Solano, [Sandy] Leon and Chris Snyder. We feel that they are very, very capable backups and with so many teams in the big leagues looking for a good catcher, we feel that we've got a great catcher in Wilson Ramos and capable backups to go behind him."

Confident as he said he was in Ramos, Rizzo reiterated that the 26-year-old catcher has to stay healthy and see what he can do with a full season of at bats. Ramos returned from the second of two hamstring injuries he suffered last summer in early July and put up a .276/.307/.477 line with six doubles and 14 HRs in the final 64 games and 251 plate appearances of his fourth major league season.

Returning for the late season run was a big step for the young catcher.

Former manager Davey Johnson was asked during Ramos' second-half run if he ever imagined what a full season from the catcher would look like?

"Ramos is really a strong no.1, one of the best catchers in the league."

Ramos played 78 games total last season, a year after suffering a torn ACL and meniscus in his right knee in 2012, and he finished the 2013 campaign at +1.8 fWAR. The closest he's come to a full major league season was in 2011 when the then-24-year-old catcher played a total of 113 games, finishing at +3.0 fWAR and posting a .267/.334/.445 line with 22 doubles and 15 HRs in 435 PAs. He's made 399 plate appearances total in two seasons since then, however, so having to use some combination of Snyder, Leon, Solano or one of the other veteran catchers they've signed is a significant risk if Ramos can't stay healthy. 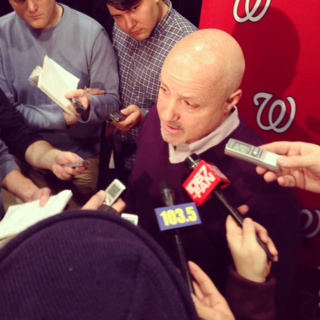 Will anyone be surprised if Mike Rizzo goes out and gets another catcher this Spring? Can the Nationals piece together 34-37 starts from their in-house options if Ramos stays healthy? Who will end up being the Nationals' backup backstop on Opening Day?