After an exciting Thursday in NatsTown, we take a moment to check out the five N.L. East center fielders. They have a lot in common, some of it good. The Fan Projects see a pretty close grouping of players, but fleshing out underlying assumptions helps to separate the group. It's close, but familiar face sits at the top.

John Fogerty immortalized the position in song, and looking at the anticipated offensive production of the players below, it's easy to dream that one can be center field. Unfortunately, the reality is that even being a slightly-to-modestly below average hitter in the bigs is pretty much impossible. And the group below also goes to show that major league center fielders can be valuable in many other ways -- primarily, defense.

We checked out right fielders last week and continue with the players a few steps over in the outfield. You'll note that most of these players share similar traits, which results in a pretty close grouping -- different than the two tiers of players we saw last week. MLBdepthcharts.com again provides our projected starters.

Already a tough start to the rankings, Ben Revere sits fifth. Revere put up solid defensive numbers in '11 and '12 before registering a pedestrian rating this past season. He's also never hit a home run in his 1,300+ at bats.

Take away the bounce back in defense, and you're left without much value from a guy who seemed to hurt the Nats on occasion last season (like, oh I don't know, during Lannan's first outing against his former team).

I think there's some room to back up the glove value if you like. For example, the Defensive Runs Saved metric has cumulatively graded Revere out at zero over the last three seasons, and even Phillies fans are taking note with their eyes. He's not the defensive lock other guys on this list seem to be.

Offensively, while Revere was getting things rolling around early July 2013 - his average had hovered around the Mendoza line for a time early in the year -- a broken right foot on July 14 ended his season. That's another thing Revere has going against him: playing time. The projected 654 PA's, while not unreasonable, would be nearly 150 more than he's ever had in a single season for his career.

It isn't hard to imagine that middling defense with below average offense could result in some trips to the pine, which further dings his projected WAR. Yet John Mayberry isn't exactly knocking down the door, and two wins above replacement seems obtainable. Revere slots fifth.

Marcell Ozuna is the youngest among the N.L. East center field crop at 22, and while promising, his 2014 potential isn't the highest among the group.

It's tough to figure Ozuna's future line given the lack of big-league playing time. Here's what SB Nation prospect guru John Sickels had to say about the righty:

His enormous raw power is obvious, but it isn't his only tool: he also has a very strong throwing arm. He's lost a little speed with maturity but still runs well, handles right field without trouble, and could steal 10-15 bases in a full season. The main question revolves around contact: his power is undoubted and he's made significant strides making his swing mechanics more consistent, but he's still quite aggressive and will go on swing/miss binges against breaking stuff, which will tend to suppress his batting average and OBP. He will also punish any pitcher who puts something in the wrong place.

I think Ozuna's offensive rating may be a bit low considering Sickels' opinion. However, his line drive rate decreased each month last season, and young players are pretty dynamic. And Sickels is dead on with respect to whiff binges on breaking pitches, as you'll see Ozuna provided complimentary air conditioning to Marlins' fans last June on breaking pitches (and July for off speed): 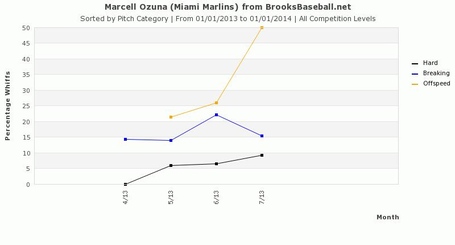 Center field is also more demanding defensively than right, so I'm unsure about Ozuna's ability to make the adjustment seamlessly. Furthermore, the Marlins also have some talented youngsters (Jake Marisnick, for example) who may earn playing time this year. For me, Ozuna slots fourth, just ahead of Revere.

I flipped Lagares between #5, #4, and his ultimate landing spot, #3. He is generally seen as a defensive specialist with low walk/high strike rates. It's sort of hard to believe he ended up at third best with that profile, but I think there's something there.

There's an easy way to say this: Lagares is a man on defense.  But it's not how you might think. Here's Jeff Sullivan at Fangraphs describing how the 24-year-old gets a lot of mileage out of his arm:

Lagares can control the running game with his footspeed, aggressiveness, and arm accuracy. And teams are going to notice, if they haven’t already. Teams are going to take fewer chances against Lagares going forward. He’s going to be a known factor...Even without a true cannon, Lagares does so many other things well that it’s basically the same idea. Lagares can be death to flying things and to running things.

Want to know what the advanced ARM value metric looks like? Credit again to Sullivan:

The rub on Lagares is his offensive performance. Simply put, a sub-.300 wOBA isn't frightening. Lagares also walks less than 5% of the time and strikes out over 22% of the time -- not the right direction for those metrics.

But there's some cause for optimism. You see, Lagares went 0-2 in 25% of his at-bats last season. The big league average was around 19.7% for the same. In other words, Lagares may be able to take advantage of pitchers seeking to get ahead by being more aggressive early in the count (which he has room to do, considering his low zone swing%). Jump on pitchers and whatnot.

Lagares is tough. There's not much question that he is elite defensively -- scouts, metrics, and fans all agree on that. The ceiling with his bat isn't really there, but I figure he's slightly better than Revere. And as much as the Fans believe he'll be behind Ozuna offensively, I think he makes it up with his glove and arm. Lagares is third.

As weird as I feel placing Lagares third, it's even more strange placing B.J. Upton second. Cover your eyes before glancing across Upton's 2013 offensive line.

Ugh.  Upton's -21.7 offensive value would have ranked him 5th worst in the majors if he had qualified. Here's one reason he was terrible: 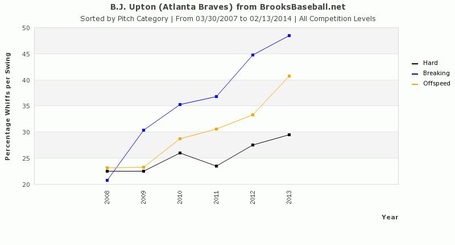 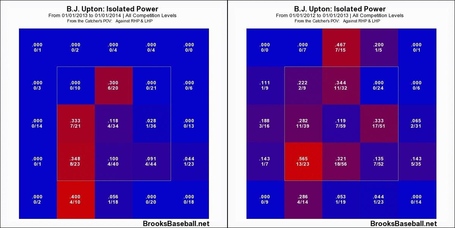 I'm not sure Upton will bounce back huge, and he's always swung and missed a lot, but I refuse to believe the power won't come back enough to make him league average. At 29, I think he can be the second best center fielder in the N.L. East. Which brings us to #1.

That's right!  I originally thought that it was really saying something when Span, who I recalled as terrible during the first half of the season, ranked in the top spot. But on closer inspection, the former Twin was at the end of the year the guy we expected him to be.

I think Span should be able to eclipse the league offensive average this year; here's how he progressed against the competition last season: 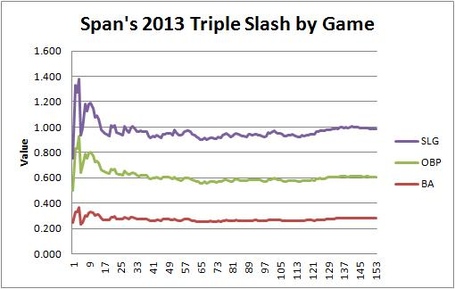 After steadying out during the early part of the season and hitting a low point around games 65-73, Span really made strides in the batter's box to help fuel a furious rally by the D.C. squad towards the end of the year. Most encouraging was the return of some semblance of pop.

Span's defense remained solid last season, too. Advanced metrics liked all aspects of his defense, including his range, at the end of the year (notwithstanding this observation on August 15). Not coincidentally, that same date Span produced this, via CSN Bay Area:

(edit: looks like the website won't let me run two .gifs at once. But you remember it.).

Then there's the playing time benefit. Aside from suffering a concussion several years ago, Span has been someone a skipper can pencil in each day (furiously knocking on wood). While it's true that his defensive talents may lead to additional injury risk, I don't think that's any more significant than the others on this list. In my view, Span places first for these reasons.

N.L. East center fielders all have notable defensive ability, and none of the teams lean on them to carry the offensive load.  Indeed, these players all have the capability to produce solid value. I wouldn't be terribly surprised to see Revere end up in the top three, or Upton to again struggle. Lagares or Ozuna could blossom as well. It should be an exciting year at center for each team, but the edge goes to the Nationals here.