Washington Nationals' first baseman Adam LaRoche signed a two-year deal last winter that includes a mutual option for 2015. Will the 34-year-old infielder be playing his final season in D.C. this summer? Can he go out with a campaign like his 2012 season?

Adam LaRoche is in camp. Bearded. Healthy. Recovered from elbow surgery. Working on gaining weight. Ready for a new season.

"'I think this year was an anomaly for him,'" Washington Nationals' General Manager Mike Rizzo told reporters including NatsInsider.com's Mark Zuckerman last September when asked about LaRoche's rough third season in the nation's capital.

LaRoche was one of three left-handers in the Nationals' lineup, along with Bryce Harper and Denard Span, who struggled to hit left-handed pitching last season. New manager Matt Williams told reporters on Monday that he thought they would all benefit from more work with Hitting Coach Rick Schu, who replaced Rick Eckstein in the role mid-season last year.

"I look at Rick Schu and the job that he did when he got here. And the difference that he made, I think, was significant." - Matt Williams on Nats' Hitting Coach Rick Schu

"I think if I look at it coming in," Williams said of the trio's struggles vs left-handed pitchers, "I look at Rick Schu and the job that he did when he got here. And the difference that he made, I think, was significant. And so, what does that take? That's approach. That's mindset. All of those things. I think Rick's done a great job and he'll continue to do that."

Washington Post columnist Thomas Boswell summed the situation up for the now-34-year-old LaRoche as the 2014 season gets underway:

"LaRoche is coming off bone-chip surgery in his elbow, had trouble keeping his weight up last season, looked hopeless against many southpaws and tailed off at the end of the season. The tip-off to a career slide or just a blip?"

Rizzo told the veteran WaPost reporter he believes LaRoche, who was signed because of his consistent production and glove at first, will provide what he has throughout his career.

Williams told reporters yesterday he too was confident LaRoche could bounce back. LaRoche had surgery to remove loose bodies from his left elbow once the 2013 season ended, but he's ready to go from the start this spring.

"When you have an injury like that there's a lot that comes along with it," Williams explained, "but once he was able to start the rehab process, then he was able to get in the weight room and put some weight on and get back it."

"I've stood at first base and watched him hit 30 over the fence and drive in a 100... I've seen that happen. I know what he needs to do to do that." - Matt Williams on history in AZ with LaRoche

"I look for him to hit us a boatload of doubles," Williams continued. "I'm not concerned about him hitting the ball over the fence, but drive runs in. I've stood at first base and watched him hit 30 over the fence and drive in a 100 on a team that was a big strikeout team in Arizona. I've seen that happen. I know what he needs to do to do that. He needs to hit the ball back through the middle and the other way and he'll work on that." 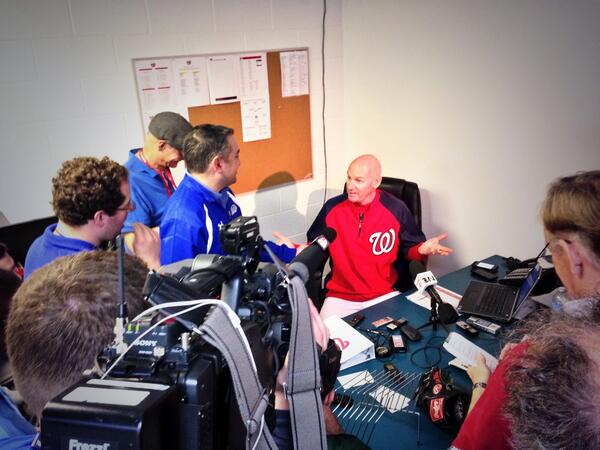 After his strong season with the NL East Division Champions in 2012, LaRoche inked another two-year deal that includes an mutual ($15M) option for a third campaign. Is LaRoche going to be back in 2015, or is he getting started on his last season in D.C.?

Will Tyler Moore or Matt Skole make a move and force their way up either this or next year? Will Ryan Zimmerman end up moving across the diamond? Are you with Rizzo and Williams in believing he'll bounce back? What do you expect from LaRoche in 2014?