The left field position in the N.L. East is stacked with some high-end, young talent that gives four of the five teams reason for hope for 2014 and beyond. And even the old, I mean odd, man out is pretty good in his own right. How does everyone stack up?

You know the idiom "out of left field"? Probably. But if you don't, it means something unexpected, odd, or random. Rumor has it there was a mental hospital out beyond left field at old West Side Park in Chicago, so when someone -- or something -- was acting a bit looney during a Cubs game, they were said to be "coming out of left field."

Allow me to awkwardly transition. Unlike the popular saying, the left fielders of the N.L. East hardly came out of nowhere: Each has, at different times, been very well regarded by prospect watchers, casual fans, and stat heads alike.

West Side Park circa '09 -- 1909 -- via deadballbaseball.com. You can just see the mental hospital beyond left field, to the right of the end of the grandstand.

Left field in the N.L. East is made up primarily of a young crop of players and Curtis Granderson. Like before, we'll use MLBDepthCharts to see which players are projected to start. Recall that we've checked out right fielders as well as center fielders, if you want to check those pieces out. Here's our WAR formula again:

Time to round out the outfield.

If you want to ignore defense, feel free to bump Brown up to fourth. That's especially true if you're skeptical that the fourth place player will return to a double-digit offensive value next year. However, because Brown isn't great with the glove, he falls just below the rest of the pack in my view.

Here's the easy part: Brown will hit in 2014. He ranked fifth in left fielder wOBA last year, just a few ticks behind another player higher on this list. At less than 10%, his walk totals could be better, and he's still striking out a fair bit (as young players do). But the lefty is league average against southpaws. Nor was his BABIP out of control -- in fact, the Fans see it getting a bit better.

The bad, as mentioned, is his defense. I've charted a few different data points below: two advanced defensive metrics, the Fans defensive value (out of 100), the Good Phight's observation of the Phillies' policies, and ESPN Insider Keith Law's view:

I'm normally willing to give differing opinions on defense the benefit of the doubt, particularly when it comes to small samples with advanced metrics, but there's consensus here -- Brown is not good with the glove. And because of that, his value decreases.

More optimistic? Score him with a slightly below average defensive value, and you're still sitting around 2.8 WAR. There's a high bar for N.L. East left fielders.

The Grandy Man moves a few miles southeast across Gotham to Flushing in 2014. When he played last season, he wasn't good. But the Fans think he'll spring back:

Granderson posted a ridiculous 43.5 offensive value in '11, and followed it up with a still good 15.0 in '12. Then injuries struck in '13. How does he look going forward? I'll leave it to Toby Hyde of SNY New York, who concluded in a great article that:

Even with a strikeout rate in the upper 20s, if Granderson can stay healthy, bop 20+ home runs in the next two years and play average- to plus-defense on the corner — all extremely reasonable expectations — he will be roughly a 2-to-2.5 win player, and help the Mets in the next two years. If Granderson can cut his strikeout rate back to 22-24%, his batting average and on-base percentage will rise, and he could be a 3+ win player.

I think Hyde's view is more measured than the Fans' in this case. Granderson's strikeout rate has increased significantly over the past several seasons (> 28% last year), while his walk rate and defensive value aren't enough to overcome the disadvantages associated with the large number of whiffs. Indeed, over the last five years, only two players in baseball have struck out more than 28% of the time while posting a wRAA over 15.0 after their 32nd birthday -- Adam Dunn in 2012 and Russell Branyan in 2009.

Because I'm skeptical of his offensive ceiling in 2014, I place Granderson fourth.

Christian Yelich will be a really, really good baseball player sometime, perhaps sometime very soon, but he faces some pretty tough competition for the top spot.

I think it's safe to say that we shouldn't project Yelich to rock a .361 BABIP in 2014 -- that's roughly Austin Jackson's career average -- although Yelich could certainly approach the number in the future. He's a well-regarded prospect, to be sure -- Law called his swing "the prettiest in the minors." So let's see it:

In a contributing post to SBNation's Minor League Ball, Doug Gray concluded that Yelich favored hitting the ball up the middle and the opposite way. However, these locations were also where his power was least developed (unsurprisingly). I'm not sure he'll improve on this immediately at the major league level, and for the reason, his top-end value is limited now.

Defensively, I think Yelich is capable of a league average mark; the prospect team at Baseball Prospectus wrote that "[h]is defensive profile isn’t quite as sexy, but he has more than enough athleticism to handle an outfield spot, although the arm is fringe so he is limited in that regard." Although he and Granderson figure to be close, I'll take the younger player. Yelich places a respectable third.

Howard Bender of Rotographs observed recently that Upton is the sort of player who seems to alternate great offensive seasons with mediocre ones. That's encouraging for fans in Philadelphia, New York, Miami, and D.C.

Of course, that doesn't mean Upton will have a down year this year. As you can see, the Fans think he'll improve both offensively and defensively.

I think the latter prognostication is fair. The Braves moved Upton around a bit in the field last year, although advanced metrics also showed decreasing range over the past few seasons. Fortunately, Andrew Sisson at Talking Chop recently detailed Upton's defense. He concluded that:

At the end of the day, like most things, the answer lies somewhere in the middle. He might be losing a step as he ages, but overall I think a second season, where he hopefully doesn’t get bounced around from left field as much, will be beneficial to his reads, reactions and timing on balls coming off the bat.

For what it's worth, Sisson also stated earlier in the article that Upton's D wasn't great by the eye test, either.

So perhaps a below average defensive value around, say, -5 to -10 works best. How about his bat?

Upton put up an excellent 36.1 offensive value in 2011, the highest of his career. He was also hacking more than ever that year: 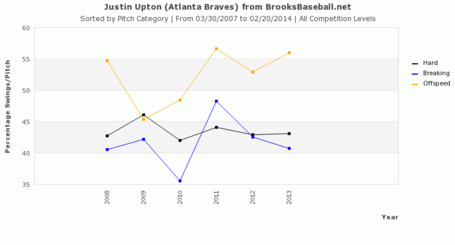 And although he swung and missed at a career average rate, he struck out a career-low 18.7% of the time. Fast forward to 2013 above, and you see less hacks overall, but more strikeouts.

The difference between 2011 Upton and every other version is that his passiveness on pitches in the zone causes him to accumulate more strikes, putting him in deeper holes as at bats continue, thus creating crappy hitting conditions. Check out this sample from 2011 through last year, with his career average as a reference on the far right. The chart displays his overall strike percentage, looking strike percentage, and looking strikeout percentage. Notice how the numbers from his great year contrast with his last two. 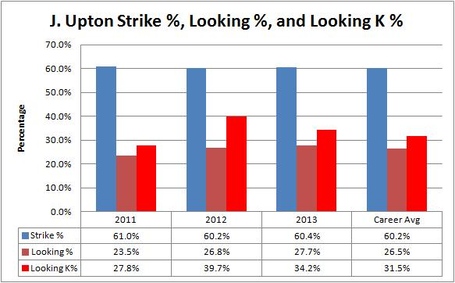 Think there's not much difference between his looking strike rates? By watching over 4% more zone-bound pitches in 2013 than he did in 2011, Upton accumulated sixty-six additional strikes where he did nothing but watch the ball cruise into the catcher's mitt. Those are free strikes. This led to twenty-seven more at bats last season as compared to 2011 where Upton hit with two strikes, where batters perform their worst.

Upton is still a great player, and even his 2013 approach is perfectly fine. I'm not the first to write about it, but in order to ascend to the pinnacle of the N.L. East left field ranks, he'll have to get the bat off his shoulder more often.

Despite some ballyhoo regarding Harper's ability to hit lefties, the above offensive projection doesn't appear too outrageous. He walks more and strikes out less than Upton does. That he was able to put up such a great offensive value last year while being hobbled for most of the season is also encouraging, although his walk percentage dipped some during the second half.

But there again, this side of Mike Trout, Bryce Harper is doing amazing things. A list of wRAA peers for his 2013-age year (and I'm cherry picking some) includes Jason Heyward (hey!), Ken Griffey, Jr., Rogers Hornsby, and Willie Mays.

Defensively, it's still pretty early. DRS likes him, UZR has him graded positive, and Fans scored him a 68 overall. I think he'll be fine here, and may well contribute positive value in 2014. When you factor in a superior offensive profile, I think it's the right call: #34 figures to be the best left fielder in the N.L. East this year.

Working from left to right field, Washington places two players at the point (Denard Span and Harper), with Werth likely being the third best in a deep right field set. Atlanta is well positioned too, putting all of their outfielders in second position. While the Mets, Phillies, and Marlins all have weaker projections, there's still some cause for excitement: Juan Lagares' defense may bring Andruw Jones comps to mind, and Christian Yelich's sweet swing cooling Miami fans during what will likely be a long summer.

Next week, we'll move to the shortstop position, which holds more fascinating battles.