A pitcher working on a new pitch in Spring Training? Heard that one before? What do you think about Washington Nationals' right-hander Stephen Strasburg trying to add a fifth pitch? New skipper Matt Williams talked about watching his starter throw live BP...

Ross Detwiler is working a cutter into the mix this spring. Last season it was Washington Nationals' right-hander Jordan Zimmermann working on a changeup, in part to give hitters something else to think about when they prepare to face him. These stories are every bit as much a part of Spring Training as much-too-detailed coverage of the spring's first live batting practice sessions and late-game, scorecard-destroying mass substitutions once they start playing games.

"I think he's working on it with intent. So he's not just saying, 'Well, I want to throw this pitch and I'm just going to throw it.'" - Matt Williams on Strasburg working on a slider

This year, the top "working on a new pitch" story out of the Nationals' Spring Training facilities involves Stephen Strasburg adding a slider to his repertoire.

The Nats' 25-year-old, '09 no.1 overall pick told reporters, including the Washington Post's Adam Kilgore, that after talking about it with Jordan Zimmermann and Dan Haren last season, he found a grip and release he liked this winter and played around with the pitch before throwing it last week in bullpen sessions:

"'It’s just a work in progress,' Strasburg said. 'It’s something that I’ve been messing with. I’m just trying to get a feel for it. I’m not going to dump any of my other pitches. But I’ll just have something in the back pocket.'"

A slider will give the Nationals' starter a fifth pitch in his already-impressive arsenal along with his two and four-seam fastballs, curve and change. Pitching Coach Steve McCatty told the WaPost's Mr. Kilgore the slider was obviously still a work in progress, but something Strasburg could, "use to run the ball in on left-handers."

New Nats' manager Matt Williams got a good look at the right-hander's new pitch when he used it in live BP on Sunday.

"[He] threw, I don't know how many he threw today," Williams told reporters. "Four or five of them probably. I think he's working on it with intent. So he's not just saying, 'Well, I want to throw this pitch and I'm just going to throw it. He's getting a sense of what it looks like to the hitter and how they react to it. He didn't throw very many of them, but I thought it was a good pitch."

Asked about Jordan Zimmermann's change at the end of Spring Training last year, now-former Nationals' manager Davey Johnson said nothing that happened in Grapefruit League games really matters, and a new pitch isn't really a weapon for a pitcher until he starts to throw it consistently in regular season games.

"I think he's trying to get a sense of what it would do for his repertoire here, and he'll do it within the games in Spring Training." -Matt Williams talks about Strasburg adding a slider

As Matt Williams explained Sunday, Strasburg's at the very beginning of the process of establishing a fifth pitch right now.

"I think that he's feeling it right now," Williams said. "For me, I don't think he said, 'I'm going to throw this pitch this year.' I think he's trying to get a sense of what it would do for his repertoire here, and he'll do it within the games in Spring Training. But, like I said, today out of how many pitches did he throw? 30 something? There were four or five of them that were sliders. I think he's just trying to feel it and see what it would potentially do for him. 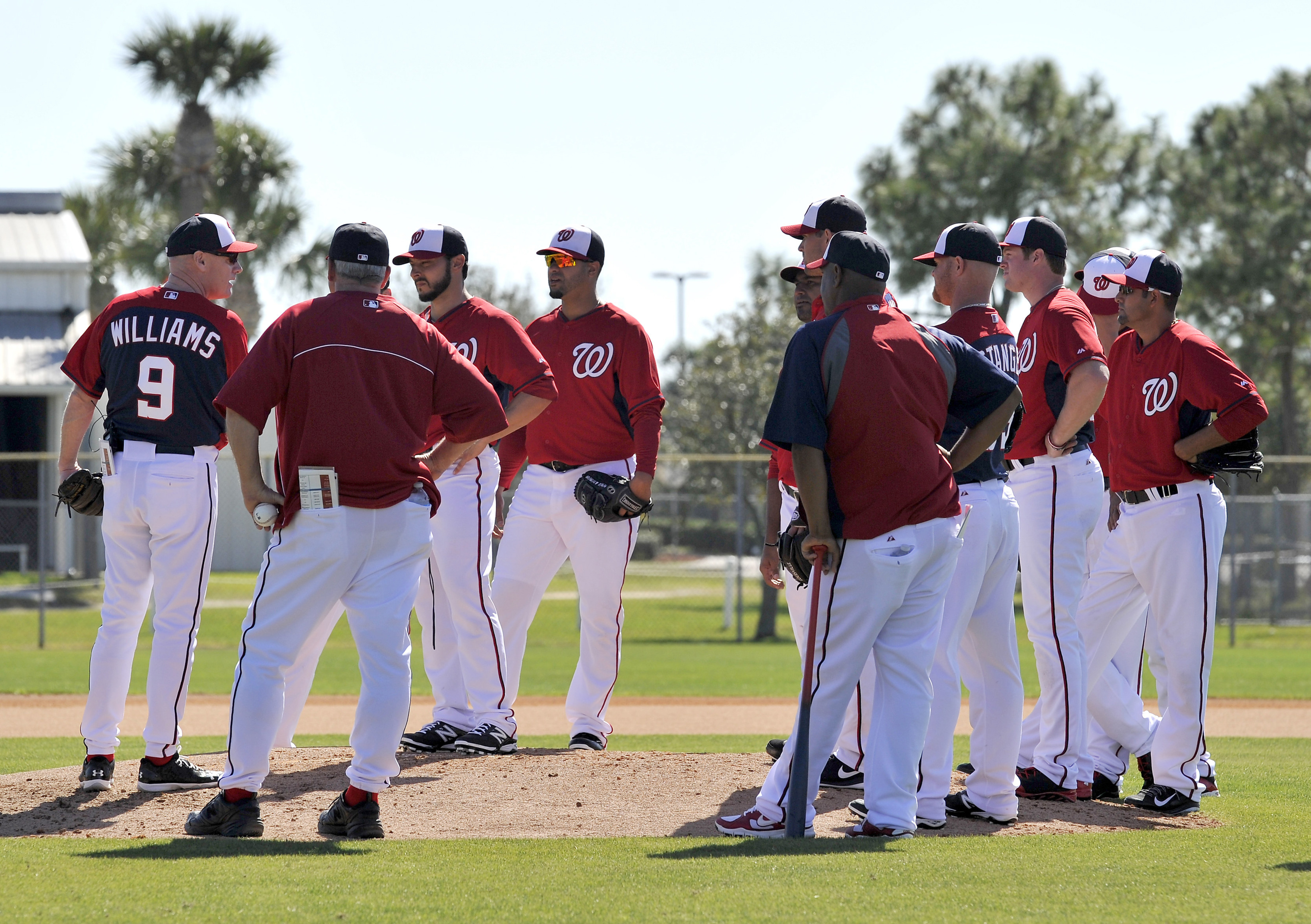 "So, does he add it to his arsenal in his first start? Who knows? Because when it gets down to the nitty gritty, he's going to go with what's got him here, I'm sure. But it may be a pitch that he can, one, throw when he wants to. Show. As a show pitch to let the opposing hitters know that he's got one. It just adds more to their brain. He'll get a sense for that in Spring Training."