How is the 2014 crop of N.L. East right fielders looking? Overall, pretty good. Here's how the projected starters shape up.

There's certainly some talent patrolling right field in the N.L. East this season. Jason Heyward, Giancarlo Stanton, Chris Young, Marlon Byrd, and Jayson Werth are projected to be starters in the division by MLBDepthCharts.com, and I fearlessly and without hedging offer my thoughts.

My personal rankings follow below. I've used a parenthesis ( ) by each player's offensive value to indicate where the player projects to rank offensively, because defense can be really tricky to measure (and by that same token, project). For a recap on how we calculate offensive, defensive, and overall Wins Above Replacement, see last week's introductory piece here.  In short, (Off. + Def. + Replacement Value) / 10 = WAR.

No, not that Chris Young. This Chris Young, formerly of the Oakland Athletics and Arizona Diamondbacks. Signed this off season by the Mets, Young looks to improve an area of weakness for the Flushing squad.

Here are two stat lines for Young. The top shows his performance from last year, while the lower row represents his projection as judged by baseball fans like you and me, which Fangraphs collects.

The Fans believe that Young will return to reasonably good health this season, making almost a 200 PA improvement over last year's numbers. But it's not just an improvement from 2013 -- Young only stepped to the plate 363 times in 2012. Even with his projected paltry wOBA this season (itself an improve over a putrid 2013 campid), his replacement value, at roughly +19 runs, accumulates the bulk of his overall 2014 worth.

This helps to show just how significant playing time can be to value, provided you don't stink the joint up in the meantime. And that adds up in the end. In Young's case, 375 PAs meant he earned just enough in replacement value (+10.7) to overcome a poor offensive showing and earn half a win above replacement.

Should we expect a +1.5 overall uptick in contribution from Young this year? I think it's close: achieving both 500 PAs and a .312 wOBA is going to be tough. Of course, if he hits lights out, playing time will follow. Yet he is three years removed from his last double-digit wRAA season. There are also younger outfielders (Matt den Dekker, Lucas Duda, and Eric Young, Jr.) who may take at-bats away from Young, particularly if his stats drag.

There's also a third thing: Young's defense was pretty good in 2011 and 2012. It's possible injuries affected his range when he did take the field, of course, so if you're inclined to credit defense and believe Young is 100% healthy, it makes the +2.1 WAR projection a little easier to digest. For me? Too many things need to swing in a favorable direction, and even then, the competition is pretty good. Young places fifth.

Although Byrd has a lower projected WAR than Chris Young, I believe he'll beat his offensive projection.

Obviously, the Fans figure Byrd's wRAA is going to pull a Lusitania in 2014. Drop 24 runs in offensive value, mix it with 100 fewer PAs, and you end up with a bus ride to Lehigh.

While Byrd had a bad 2012 -- he started 3 for 43 with the Cubs, was traded, released, then suspended for violating MLB's Joint Drug Agreement -- he performed well in 2013. Here is his wOBA, courtesy of Fangraphs, over each season of his career:

Considering this, I personally figure Byrd to sit around +10 to +12 of offensive value; you could back it down to +7 and I wouldn't mind. Combine that with league average defense -- "still a decent enough defender to have not be a defensive liability," according to Dave Cameron -- and you can get to 2 WAR even without an uptick in PA's, which may happen too. To me, Byrd figures to be better than Young, and for that reason, he is fourth.

I originally had Werth ranked third, re-ranked him second after writing up the second ranked player's piece, then thought some more, and put him back at third.

You'll note that Fans think Werth's offense will take a step back just a bit in 2014, a bet which is not altogether unreasonable. It also helps to show just how great he was on offense last season.

The main reason I concur with the Fans and believe his offensive numbers will go from excellent to merely really good is his 2013 line drive rate. Brooks Baseball shows Werth's line drive rate on hard, breaking, and offspeed pitches below. Note that last year he set career highs in 2 of the 3 marks, and posted his second best line drive rate on breaking balls in his career: 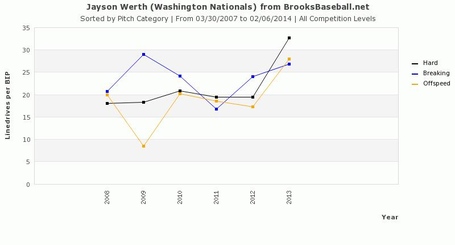 Why did Werth hit more liners? Well, other than his percentage of contact in the strike zone, many of his other swing figures approximated his career averages. So perhaps he got some more juicy pitches than normal, and shot hard-hit balls all over the park by taking more hacks. That sounds good until you realize that his isolated power, at .214, wasn't as high as his largely-similar 2010 campaign with the Phillies (.238).  More liners should mean a higher ISO.

Because he is 34 years old, I believe Werth's power, at least as measured by ISO, is likely on the decline. Sure, his home runs were there, but doubles and triples were either flat or down. Perhaps the liners were just hit at outfielders, rather than into gaps or down the line.

I'd love to be wrong and to see that the hard hit bump is real -- there's probably a convincing argument there -- but all told I think Werth's Fan projection is about right, if a run or two low. Werth just places behind Heyward, and is third in my book.

The difference between Heyward's projection and Werth's projection comes down to defense. I know FBB regular RobBobS isn't alone in his disdain for what advanced metrics say, and I share the concerns of most folks who've taken a hard look at UZR and its pros and cons.

The Fans see Heyward's offense rebounding after an injury-afflicted 2013 season.

And these are surely some tough assumptions. I can't argue with the counter-argument that Werth is more of a known commodity, and for that reason, may well be the superior player. Indeed, often projection systems weigh the most recent year of data most heavily.

But then there's the obvious age difference, pedigree, and defensive projection. In fact, the latter accounts for a 16.5 swing in value, or 1.6 WAR.

Ultimately, then, it comes down to whether you think Heyward is significantly better than Werth on defense. Here is a more detailed look at some of the advanced metrics:

Heyward didn't just come out of nowhere defensively.  In 2009, Minor League Ball's John Sickles wrote that "scouts continue to praise his defense and baserunning instincts." Recently, Steve Adams of MLB Trade Rumors opined that "Heyward consistently turns in solid offensive contributions and elite defense in the outfield." I don't believe this is just stat talk; here, we have scouts and numbers saying the same thing.

It's impossible to ignore defense entirely, and for that reason, I settle by a slim margin with Heyward second.

Marlins fan, rejoice!  In my view, which is worth nothing, Stanton is the best right fielder in the N.L. East, just slightly ahead of Werth and Heyward.

The Fans figure Stanton to return to his 2012 offensive value (36.3 wRAA) in 2014. Similar to Heyward, Stanton has patterned an on year with an off year over the last two seasons.

I think most people would agree that Stanton's offensive contributions are more significant than Heyward's; even in a down year, he was only seven runs below Heyward's career high (quick aside on that: Although Stanton crushed line drives left and right last season, over 8% of those ropes went for outs. In his big 2012, only 5% went for outs).

To me, then, Stanton is at least a win better than the J-Hey kid with the bat.

Health-wise, Stanton isn't that much superior to Heyward (indeed, of the troika, Werth may be the most healthy).  Here's what Fish Stripes had to say on this front:

Stanton's injury history is becoming more and more checkered. In each of two spring trainings before the 2013 one, Stanton missed about half of spring training with nagging injuries, and subsequently he came out cold to start the season in each of those years. Last year, he sat out a total of 41 days, including 30 days following a surgery to remove foreign bodies in his right knee.

Call he and Heyward even here, I suppose.

Like with Werth and Heyward, the battle of Stanton and Heyward comes down to what you think about defense. I think it's less clear that Heyward is that much better than Stanton on the continuum. For example, 2013 -- during which the Miami right fielder hurt his hamstring -- was the only year Stanton had a negative UZR and DRS. Fans have generally had a close view of their defensive ability, too.

Is it possible that Heyward is ten runs better (and therefore makes up the win from offense) than Stanton on defense? Sure. But considering that the batting difference was conservative, I can't confidently say that Heyward is the superior player for 2014.

So there you have it: Stanton, Heyward, and Werth occupy a close grouping at the top, while Byrd and Young offer potentially solid, but not great, performance and the back end. What do you think?

Thanks to Baseball Prospectus, Baseball Reference, Brooks Baseball, and Fangraphs for statistics.