So much of the conversation about the Nats' fifth starter has focused on the presumed incumbent Ross Detwiler versus the out-of-nowhere 2013 success story Tanner Roark. But Taylor Jordan is quietly making a case for himself.

Taylor Jordan was drafted by the Cincinnati Reds in the 18th round of the 2007 draft out of Merritt Island HS in Florida. Jordan declined the Reds' offer and instead went to Brevard Community College. It wasn't a big deal when the Nationals picked him in the 9th round pick of the 2009 draft that also featured Stephen Strasburg, Drew Storen, Jeff Kobernus, Nathan Karns and Danny Rosenbaum.

Although Jordan got off to a strong start in the GCL, he struggled a bit in 2010 when he moved up to Auburn and Hagerstown.

He got back on his feet and got on the prospect radar in 2011, pitching to a 9-4 record at Hagerstown with a 2.48 ERA and a 1.198 WHIP, which made it that much more disappointing when elbow pain that year required Tommy John surgery.

His first year back in 2012 Jordan was all over the map, as many pitchers are in the recovery stages from TJ surgery. He fell so far that he didn't even make the "others" list in John Sickel's assessment of Nationals prospects in 2013. Not surprising for a 24yo pitcher coming off an injury who had never pitched above Low A ball.

When the Nationals needed a pitcher, Jordan got the call.

By the time Jordan was called up, Sickels had noticed. Among other things, that minorleagueball.com article notes that Jordan:

"Has a strong ground ball tendency and gives up very few home runs, just one in 90 minor league innings this year, and only 14 in his entire minor league career covering 339 innings."

Taylor Jordan's run with the Nationals last year was up and down, flashing promise. But from his very first start he also learned that life on the 2013 Nats often included poor defense and a lack of offenza. Despite his 1-3 record, his ERA was a solid 3.66, and he continued his strong ground ball ways, with a 1.32 GB/FB ratio (MLB average: 0.82) and a HR% of 1.4% (MLB average 2.5%). No less an authority than our very own Garrett Hooe couldn't help but notice: Taylor Jordan is legit.

While most of the talk this spring has focused on Ross Detwiler and Tanner Roark, what about Taylor Jordan?

As we've noted many times in threads, Spring Training stats are meaningless, right?  Small sample sizes under artificial conditions. Well, mostly. But they're all we've got. As Fangraphs noted:

(a) Spring-training stats don’t appear to be very predictive of regular-season stats; but

(b) The return of baseball is exciting, and invites consideration of some sort; and

(c) Research suggest that, of all spring-training stats, pitcher strikeouts and (to a lesser degree) walks are probably the closest thing to predictive.

Based on these three predicates, Carson Cistulli at Fangraphs posts a self-described largely irresponsible leaderboard. And at the top of that leaderboard? Taylor Jordan. As Cistulli noted:

Washington’s Taylor Jordan has produced the most impressive spring-training performance among all pitchers, it would appear. His most recent appearance, this past Saturday against a lineup of mostly Atlanta starters, was the best of his three total ones: 3.0 IP, 12 TBF, 6 K, 0 BB. While Ross Detwiler is probably the favorite to win the last spot in the Nationals rotation, Jordan could merit consideration for starting duties, as well.

Notgraphs took note also, citing Jordan's own mention of the work he's done on improving his slider - complete with .gifs of the revamped pitch.

Is this just Spring fun? Maybe. 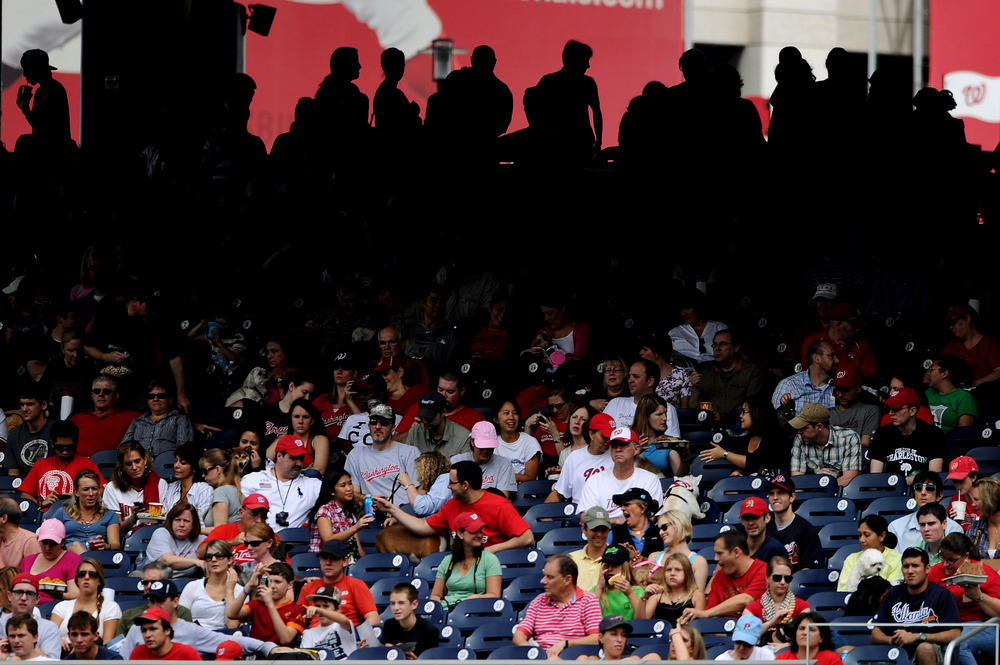 The prevailing wisdom is that Ross Detwiler is the favorite for the #5 spot, but Tanner Roark has a lot of fans who feel that his amazing 2013 run means that he should be the starter. Because he's out of options, you know that Detwiler will make the 25-Man Roster no matter what. The Nationals will likely need all of them this year. But keep an eye on the dark horse candidate, running below the radar. He may ultimately be the best of them all...