Nationals, Ross Detwiler Can Succeed Out of the Bullpen

The Nationals recently announced that Ross Detwiler was no longer in the running for the fifth starter's spot in the team's rotation. Regardless where you fall on whether Detwiler's performance to date merited the decision, there is reason to be optimistic about the team's choice.

Share All sharing options for: Nationals, Ross Detwiler Can Succeed Out of the Bullpen

After Ross Detwiler pitched in Game 4 of the 2012 National League Division Series (and for some time before), I admit that I was excited for his chances in 2013 -- I even wrote that if he could develop his breaking pitches more, he could move beyond his predictable two-fastball repertoire and associated 1.5-2 WAR ceiling. Like many other aspects of the Nats' squad, 2013 was time to be optimistic about the lefty.

Instead, Detwiler actually threw fewer offspeed pitches in limited time last year. Yet he was still on pace for close to a two-win year, and the Nats have done much worse for a fifth starter (also, let that be a lesson for anyone who thinks I know what I am talking about).

On Tuesday, the Nationals announced that Detwiler would be moving to the pen, and that the fifth starter spot was an open competition between Taylor Jordan and Tanner Roark (well, and Chris Young, somehow). Many folks felt that Detwiler earned the fifth starter spot through his performance in 2012 and 2013 (before getting hurt), and were questioning the decision. It actually reminded me a little of the attachment some had -- myself included -- to John Lannan before General Manager Mike Rizzo sent him packing.

But no matter where you fall on the merits of the decision, I think it's reasonable to figure that the Nationals are a better team in 2014 with Detwiler in the pen. Here are three reasons why.

"If you look at Ross's numbers over his career here and down below he’s been very effective against left handers," Matt Williams said. "So I think that’s something [moving him to the bullpen] you’ll probably see us do here very quickly."

If you didn't know any better, you'd believe that the Nats' skipper actually said that. But he didn't: That quote is from Buck Showalter, the manager of the Baltimore Orioles, about his decision to transition a willing Matusz to the bullpen in mid-2012. 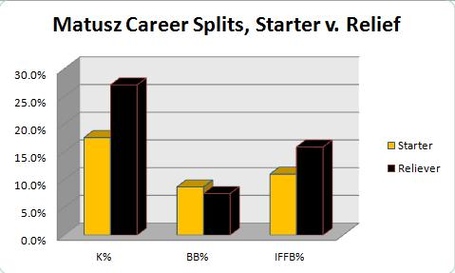 In his first full season working out of the bullpen, Matusz held opponents to a .273 wOBA en route to a one-win season by Fangraphs' figuring (+.7 bWAR) over 51 innings pitched. Although it doesn't sound terribly impressive, it placed the southpaw in a tie for 37th best among 135 qualified relievers last year. Only one National bullpen arm accumulated that much value in 2013: Craig Stammen.

Don't like reliever WAR? Matusz was 10th best in Major League Baseball at stranding inherited runners last season; just 13.5% of runners on base when he entered the game ended up crossing the plate. And although relievers serve many purposes, that's the point of a good fireman, which is a job Detwiler may well be asked to do.

Of course, there are enough differences between Detwiler and Matusz that the comp is not a lock. For example, Matusz struck out more batters as a starter (17.6%) than Detwiler (13.7%). But that's all right, because we can make some general conclusions about the starter-to-reliever dynamic beyond this very specific evaluation.

Upshot of Converting a Starter to a Reliever

It's about four years old, but Eric Seidman of Baseball Prospectus researched whether pitchers perform better when going from the starting rotation to the bullpen, using data from between 1974 and 2009. His answer? Yes.

In fact, for pitchers labeled by Baseball Reference as "finesse" hurlers -- those that strike out and walk less than a combined 24% of hitters, a club of which Detwiler is a member -- Seidman determined that:

[f]inesse pitchers clearly benefit the most from the shift [from starter to bullpen]. That they comprise such a large percentage of the greater whole likely suggests some semblance of selective sampling, as they may be on the cusp of maximizing their abilities and being able to focus on a lineup one time through could get them over the hump.

Let's visualize Seidman's findings.  The table below charts finesse pitchers in terms of FRA (Baseball Prospects defines FRA as Fair Run Average, "which is the RA for a pitcher but with bequeathed baserunners factored in to score at a league-average rate"), ERA, K%, and BB%:

From the findings above, pitchers most similar to Detwiler perform better out of the bullpen. And you probably already have a notion as to why; as Seidman stated, "[t]his does not suggest that moving someone like Jamie Moyer to the bullpen will gift him with an extra seven mph or a dramatic increase in effectiveness, but rather that the finesse guy's guile works very well one time through the order."

But exactly how much will it help Detwiler to only go through the order once? Luckily, Hamilton Marx recently entered a paper in the Sloan Sports Analytics Conference that addressed building a team of so-called "super relievers," rather than the traditional starter/reliever mix that teams use today. Marx found that, among other things, starting hurlers in the major leagues incur a "times through the order" penalty. You see, a pitcher's triple slash against increases the more he goes through the lineup, as follows: 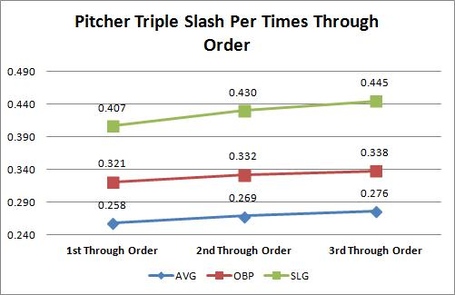 Yikes. And equally as discouraging, Marx also noted that sinkers see the highest wOBA against by a pitcher's third time through (from .353 through the first plate appearance to .371 in the third). Of course, the sinker is one of Detwiler's main offerings.

Three final points here, all of which have been made in other articles and comment sections on this website. First, keep in mind that Detwiler had the worst second and third time through the order OPS against among the big three returning Nats' starters (everyone else, save Jordan Zimmermann in his third time through the order, had an opponents' OPS under .700). Second, also recall that Detwiler has a sizable platoon split (.767 OPS against RHH, .627 OPS against LHH).  Third, Detwiler has over a small sample (32.1 IP) shown that he can bump his strikeout rate (from 13.7% career as a starter to 18% in relief) a meaningful amount when coming out of the bullpen.

So, the Nats are removing a starter from the rotation who struggles as the game goes on and against batters from the opposite side of the plate. Instead, the team is placing him in a position to maximize the advantages he does have -- solid performance one time through, as well as a talent to get lefties out -- with the inherent advantages of moving from the rotation to the bullpen to boot. There's some relationship between these things on a larger scale, but it doesn't preclude the Nats from earning value.

Detwiler is More Valuable to the Team in the Bullpen

I think it's reasonable to think Detwiler can put up Matusz-like numbers over 60-70 innings based on the above reasons. If so, the Nats could project a 1.0-1.2 fWAR contribution from the southpaw. In this case, Taylor Jordan and Tanner Roark -- Joark, as d_c_guy likes to call them -- would be the rotation alternatives.

I'm high on both the prospect and the out-of-nowhere righty, so I'll call Jordan for +1.2 fWAR over 120 innings pitched and Roark for +.7 over, say, 80 innings pitched, give or take a little here and there (assuming they don't run one of them out for 200 innings, which would probably exceed anyone's expectation). Setting aside roster flexibility issues, that would eclipse Detwiler's career best mark in both innings pitched and WAR value, and leave the Nats with about + 3 fWAR between the three players.

Assuming Detwiler stayed in the rotation, the remaining two bullpen spots could be filled by Roark and, say, another lefty, either Mike Gonzalez or Xavier Cedeno. Set Detwiler to equal his career best as a starter, and bank +1.6 fWAR. Being optimistic with Roark, we can say he'd hit in the neighborhood of +.7 fWAR over 60-70 innings pitched (giving him the benefit of coming out of the pen, too). That's 2.3 fWAR before the lefties.

Neither Gonzalez or Cedeno figure to hit any more than +.2 fWAR, and that's probably rosy in itself. I don't see either being superior to Detwiler in the same role, of course, and even removing a lefty in favor of an upside guy like Christian Garcia (who has his own injury issues) still doesn't get you all that close to our +3 fWAR scenario with Detwiler in the bullpen.

Again noting that we're setting roster construction issues aside, it's pretty clear under this calculus that Detwiler to the bullpen is the right decision.

While bringing new players in via trade or free agency or promoting players from within can improve the performance of a team, so too can taking a hard look at the roles an individual player has with a team. The Nationals appear to have found an area they can improve with little cost (and, indeed, they may perhaps save some money: although Jordan or Roark would be closer to arbitration, Detwiler may earn less there as a result of this move).

Will half a win matter, assuming a difference on the low end of our comparison above? With the Braves starting rotation crumbling, perhaps not as much as earlier this spring. But Atlanta is still a very talented team, and there's also value in having a top record that permits a team to avoid a one-game crapshoot playoff. In any case, most every way you cut it, the Nationals improved this week. I can't ask for more.

Thanks to Baseball Prospectus, Baseball Reference, Brooks Baseball, and Fangraphs for statistics.

*In case you were curious, I had Rendon a close second to Chase Utley in my N.L. East second baseman ranks, which were bumped for this piece.