Matt Williams: Doug Fister To Start For Nationals On Saturday

Doug Fister hasn't pitched in a Grapefruit League game for the Washington Nationals since debuting for the Nats on March 2nd. Matt Williams told reporters last night that the right-hander will return to competitive action on Saturday vs the Miami Marlins.

Share All sharing options for: Matt Williams: Doug Fister To Start For Nationals On Saturday

Matt Williams told reporters, in discussions in his pre and post-game press conferences on Wednesday, that 30-year-old pitcher Doug Fister will make his long-delayed second Grapefruit League start on Saturday afternoon when the Washington Nationals take on the Miami Marlins in Viera, Florida's Space Coast Stadium.

"We'll have to see how he reacts to all of his further work. But he feels good right now and we'll continue to progress." - Matt Williams on watching Doug Fister closely

"He will pitch on Saturday, and it will be in a major league game," Williams said, and the Nats will monitor the right-hander closely as he works his way back from the elbow inflammation that has kept him out of competitive action since he debuted in a Nationals uniform on March 2nd.

Since then it's been throwing on flat ground, bullpen sessions, and a few innings of action in a minor league game for Fister, as he builds his arm strength back up. "We'll have to see how he reacts to all of his further work," the Nats' skipper explained. "But he feels good right now and we'll continue to progress."

Williams went into some detail about what that progression will look like when he was asked whether or not Fister will be able to make his first regular season start when his spot in the rotation comes around? The scheduling at the start of the sason might work in the Nats' favor, the Nationals' skipper explained, since there are two off days early.

"We've got [April] 1st and the 7th off," Williams said. "So again, we can look at that, but at this point we want to build so he's able to make his first start. That will tell itself out in the next week. His next two outings, where he can get to? The plan is to go to 45 [pitches] then to 60 and then it depends on his stress innings, run him up to 65 and look at where we're at and how that all works within the framework of his next start. We'll see."

Though the time off has certainly set Fister back, Williams remained open to the possibility that the former Detroit Tigers' starter, acquired this winter in a 3-for-1 deal, will be able to take the mound for his first start.

"He's a different animal," Williams said. "He doesn't necessarily rely on power. He's in the strike zone, the balls sink and he's a ground ball guy. He can get us quick outs if he's right and if he feels good about it. His 80 pitches may be different than somebody else's 80 pitches, so that's something we have to look at as well."

"If he's ready to go for his first start then we have one spot to fill. If he's not then we potentially have two, so that makes your decision at that point." - Matt Williams on Fister affecting 5th starter battle

Fister's readiness for his first scheduled start, which will follow Stephen Strasburg on Opening Day, Gio Gonzalez in Game 2 of 162 and Jordan Zimmermann's 2014 debut, could also play a factor in the battle for the fifth spot in the Nationals' rotation.

"We look at [Doug] Fister certainly as the tell-tale sign there in that regard," Williams explained, "because if he's ready to go for his first start then we have one spot to fill. If he's not then we potentially have two, so that makes your decision at that point. But all indications are that Doug is going to be ready, and again, we have to monitor that as we go along."

"I think it's important for us to make sure that we get him to a point where we feel comfortable that he could start a major league game," Williams said. "If you look at it right now, he's at two innings, 30 pitches. The next time we go out he'll be somewhere in the 45 [pitch] range. The time after that somewhere in the 60 [pitch] range. 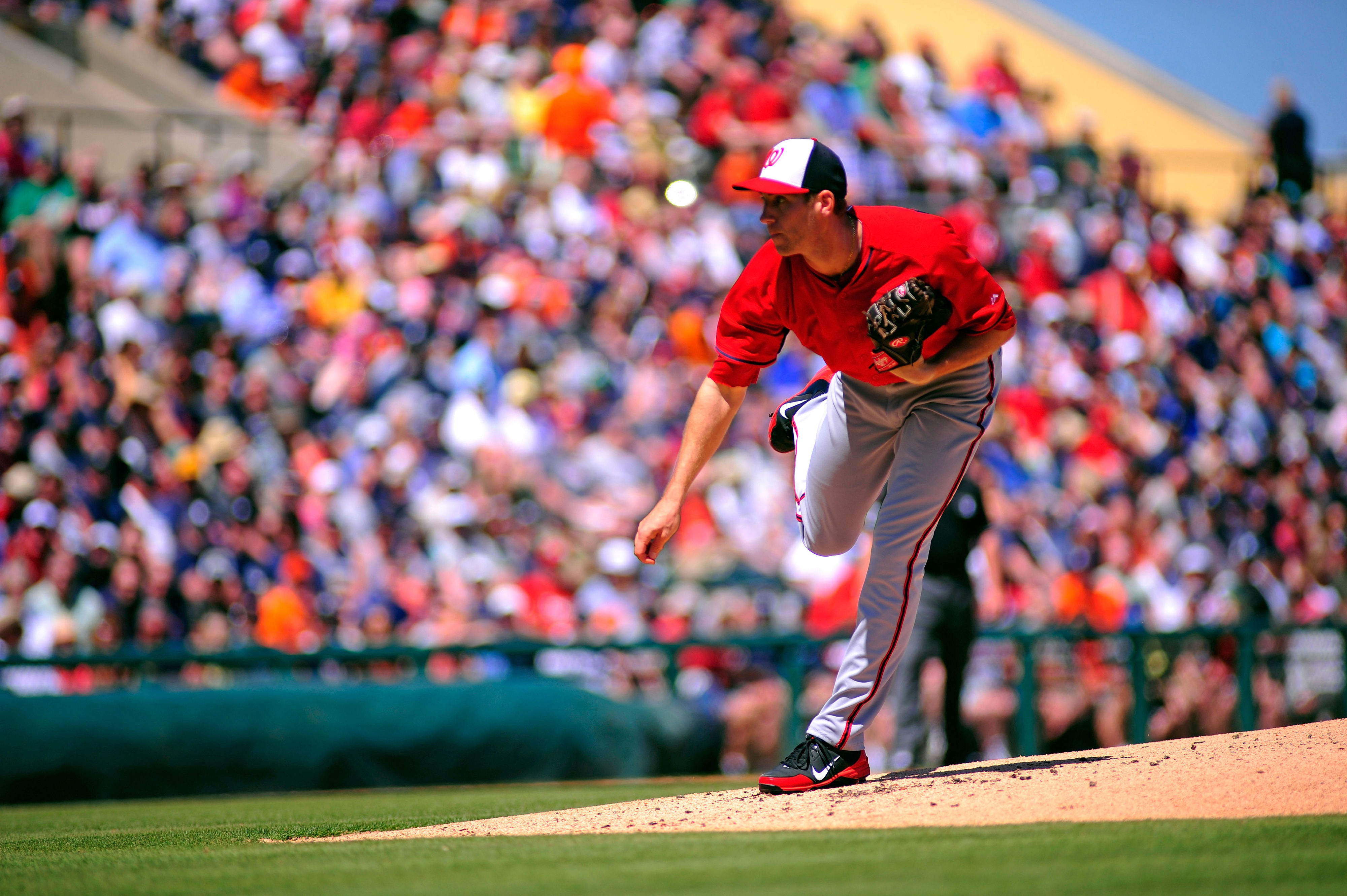 "So do we feel comfortable by the time we get to that that he'll be able to go out there and give us five?" he asked rhetorically. "That's important for us. So we'll have to see how he feels, but it could change. If he feels great going through, we may have an opportunity to go ahead and have him start the season, but we'll see."